Whats Michelle Yeoh got to do with Tourism DG, Mirza's dental corruption? 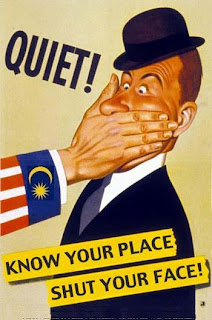 In the meanwhile, its time to share this delayed juicy bit of information on the Government's recent barrage of corruption cases.

Any genuine effort to combat corruption should be supported. However, there must be no half measures, public relation game exercise and political ploy behind it. The key word is genuine effort.

The charge on the two Perak Assemblymen by ACA during Permatang Pauh by-election was too obvious to be mere coincidence? While the charge against UMNO Seremban Division Deputy Head hopefully has no link to stem any rebel against Abdullah.

Is the Puspakom crackdown a mere ploy to deny them a 15-year contract extension? After a successful cancellation and re-routing the contract to one of Kamaluddin or Khairy crony, will the case likely go NFA? That means No Further Action.

Don't blame anyone for being sceptical.

What happened to the Kasitah Gaddam trial? Any progress on the two graft files given by Dr Mahathir to Abdullah allegedly on Dato Nazri Aziz and Tan Sri Annuar Musa? Remember Rais Yatim remark regarding 18 Ministers to be hauled up for graft. How about the Kubang Pasu RM200 bribe to deny Dr Mahathir as the Division's G7 to the UMNO GA? Until today, the mystery of ECM Libra Avenue and MV Agusta remains quiet and covered deep!

Building on that introductory scepticism, lets get back to the corruption charges against Tourism Malaysia Director General, Dato Mirza Mohammad Taiyab for getting a RM13,860 dental work. To fulfill your curiosity on Michelle Yeoh, the full version is recommended read after "buka puasa". 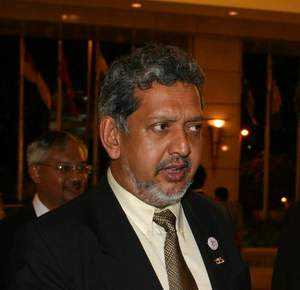 This is what blogger Hantu Laut thought about it:

The latest arrest was for a miserable RM13,860.00 and for a man of that stature that was really a shocker. That stupid indiscretion is going to give him a terrible toothache .

The gist of the story is, if you want to be a buzzard, think big, take millions and it will take million years to investigate your case and more often than not it would be so messy they would give up as they couldn't find sufficient evidence to charge you.

So, why would a Ministry's DG take kickback in the form of a RM14,000 dental operation?

An article came out on Malaysia Today August 14th, 2008 revealing that straight honest man Mirza has been getting in the way of Azalina. He refused Azalina's demand to absorb 20 of her staff in the Ministry's payroll. But she managed to divert money to pay her staff through an ad company handling the Ministry's ad with RTM.

Yes, its Azalina, the former Sports Minister with the "bright" idea and likely to be an insidious one to build a RM480 million sports centre for Malaysian sportmen in London.

This whole dental issue is believed to be linked back to Azalina's dormitary mate at University Malaya, Dr Kamsiah. Mirza used to be her patient before becoming DG. He was introduced by her husband's partner that happened to be Mirza's brother's partner in a media company.

Dr Kamsiah underwent a divorce and Mirza's brother had to use his company's money to clear up Mirza's outstanding bill with his partner's ex-wife. She must have broken it to her University buddy who is the Minister of Tourism. 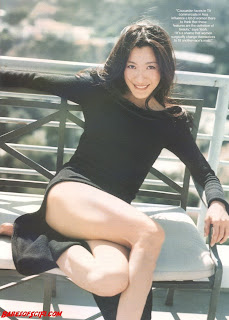 The Malaysia Today checks out. And, seeing the article reprinted on blog Perkhidmatan Awam is an indirect indication that the article tally with what's being said among Government officers. The expose is still polite and somewhat restrained.

Azalina, as we know is aspiring to be Naib Ketua Wanita UMNO, Shahrizat's current post. She was described by blogger Husin Lempoyang as "pink selamanya" but she has political aspiration.

Its an open secret she's got lots of political commitments to maintain, including maintaining her team of cybertroopers. By the way, one cybertrooper wrote a denial for her but its not convincing without being substantiated with new or different fact.

It is alleged that her father wanted a RM10 million contract to open a 'Malaysia Tourism Kiosk' at the Beijing Olympics but was opposed by the DG.

As one little bird said another proposal opposed by the DG was to have Michelle Yeoh as Tourism Ambassador of Malaysia.

The deal is believed to be in the tune of RM10 million a year - RM4 million for her fees and the balance RM6 million is the cost of her entourage of assitance, beauticians, trainers and travel, inclusive for Todt, the Ferrari boss, Monsoon Cup regular and her lover.

Mirza's was against it, His argument was Michelle Yeoh is more Hongkee than Malaysian. She is usually referred as Hong Kong martial arts actress and had settled in Hong Kong with former husband, tycoon Dickson Poon. Marketing wise, what market will she appeal and serve?

Apparently, the Tourism Ambassador idea came from none other than Prime Minister Abdullah herself. In fact, he has been persistently enquiring about it but Mirza kept mum.

Its not a remote possibility that Azalina may have been embarassed to say the DG refused. This may lead her to pin Mirza for his teeth to win the heart and curry favour for Abdullah.

Abdullah's close friendship with Michelle Yeoh and her boyfriend does not need repetition. But should read this snippet from Utusan Malaysia dated August 18th about Michelle Yeoh:

Does it sound like a promotion build-up? Maybe not so apparent yet. Lets wait and see ...

Tourism Malaysia director-general Datuk Mirza Mohammad Taiyab, whose brother’s company obtained overseas projects from the agency, has been charged with wrongfully accepting a sponsored dental treatment from the firm.

Under Section 165 of the Penal Code, Mirza as a public servant should not have accepted the sponsorship as the company has direct business dealings with his official duty in Tourism Malaysia.

Mirza, 50, pleaded not guilty in a Sessions Court here yesterday to accepting a sponsored dental implant treatment worth RM13,860 from his brother’s partner in the consultancy company.

He is alleged to have received the sponsorship from Perunding Pakar Media Sdn Bhd’s director Zulhisyam Ayob, 48, without consideration.

The company allegedly got advertising projects in North America and Canada from Tourism Malaysia.

Mirza, who was then Malaysian Tourism Promotion Board’s deputy director-general I, was said to have sought the molar implant treatment at Clinical Practice Prosthodontics Sdn Bhd (CPP) via a cheque issued to him.

If convicted, he can be jailed up to two years, or fined or both under Section 165 of the Penal Code for obtaining valuable items without consideration from a person who has connection to his official functions.

An Anti-Corruption Agency’s investigation unit official lodged the complaint against him on May 6.

When his case was called up at 11.15am yesterday, a pensive-looking Mirza was escorted by ACA officers before he entered the dock.

He listened attentively to the content of his charge as a court interpreter read it to him.

Mirza, who was picked up from his Putrajaya house at about 7am, immediately recorded his not guilty plea.

DPP Mohd Asnawi Abu Hanipah asked the court to set bail at RM20,000 in one surety, saying that it was in view of the amount involved and the high position held by him.

Pleading for lower bail, his lawyer Manmohan Kang asked the court to consider the fact that his client had worked with the board for 23 years.

“Since the investigation started in April, the accused had given 110% co-operation to each ACA officer who handled the case.”

Manmohan said his client, who is married with three children, should be released on a personal bond without a surety pending his trial.

DPP Mohd Asnawi told The Star that the accused did not face a bribery charge as “it is not in the form of monetary gain or favour but for allegedly obtaining valuable thing without consideration.”

Yesterday morning, half the staff at the Ministry of Tourism's DG's office were in court to show support to their Boss who is being unfairly charged.

Sources say that Dato Mirza Mohd Taiyyab and his staff at the Ministry of Tourism have been a thorn in the side of Azalina Othman since she became its Minister. This is not by design. Taiyab has always been a simple and straight forward Civil Servant.

When Azalina became Minister, she insisted that she wanted to bring along 20 of her own private staff but to be put on the Ministry's payroll. Civil Service rules only allow a Minister four private staff. Azalina felt irritated when she did not get her wish.

Not giving up, Azalina got her cronies to set up a company that was given a contract to handle the Minister of Tourism's advertising slots on RTM. The money paid to this company by the Ministry was diverted to pay the salaries of the private staff Azalina brought along.

Azalina never forgave the DG Taiyab for standing in her way. She vowed to get him. Since she became Minister it has been a running battle between the corrupt Minister and the straightforward DG.

Then Azalina's father showed up. He wanted a RM10 million contract from the Ministry of Tourism to open a 'Malaysia Tourism Kiosk' at the Beijing Olympics. Azalina ordered the DG to approve her father's request. The DG said no. This really got Azalina mad.

Azalina then launched an investigation into the DG to screw him up. She wanted him out of the way. They found nothing. The DG of the Minister of Tourism ran a tight ship and was responsible for a RM1 billion budget, all of which was being managed well by him.

Dato Taiyab is the most popular DG in the Ministry of Tourism. He is also well liked by most tourist related organisations like the hoteliers and travel agents associations. He has contributed significantly to promote Tourism Malaysia overseas.

There was one weak link. A dentist by the name of Dr Kamsiah. Dr Kamsiah's husband S. was a partner with the DG's brother T. They ran a media company. Three years ago, before he became DG, Dato Taiyab needed a tooth implant. His brother T. recommended his partner S's wife Dr Kamsiah. (Since then S. and his wife Dr Kamsiah have divorced and both have remarried).

Kamsiah fixed Dato Taiyab's teeth and charged him over RM15,000. This was three years ago. Since the implant treatment took months, he paid a little at a time during each visit. After a while Dr Kamsiah told him that she will bill him in total at the end of the treatment.

But unknown to Dato Taiyab, she sent the bill to her then husband S. who settled the bill without informing Dato Taiyyab.

Here is another connection. Kamsiah was the dormitory mate of Azalina at University. She is also known to be 'one of them'.

Later S. had a falling out with his partner T. Something about not getting contracts from the Min of Tourism. Despite having his brother as their partner, the DG of Tourism was 'impenetrable.'

He had to be 'removed'. Hence the old dental bills were pulled out conveniently.

Its sad that good Civil Servants get victimised for doing honest work. Off course, its the court to decide on his innocence.