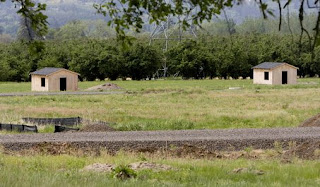 Tony Fernandez's wet dream state-of-the-art Airport - no frill and low cost. Just an open field and two shack for departure and arrival. Progress?
In Labu LCCT: Another Magic Pumpkin, I reproduced an article e-mailed to me by aviation practitioner to dispell the preposterous claims by Tony to justify building the Labu LCCT. Subsequently, I revealed in Tony Fried-Nandos and Slime Darby, Look here ... the sub-standard practices, compromise on safety, and cocophony in Tony Fernandez management of his Airline.

Air Asia operates a multimillion turnover business and yet do not have a properly outlined business plan . They have been wasting Government fund to build their requested LCCT extension or dedicated Airport at several places in the country. Contrary to his claim that Air Asia does not receive subsidy unlike MAS, every passenger is actually subsidized. Yet, Tony witheld the passengers paid airport charges to MAHB by citing excuses of poor service and high charges. The cheap bastard was trying to sqeeze out discounts for the unpaid amount. Thats a real Shylock!

This article in Malaysia-Instinct.com below exposed the similar issues. Despite the poor service being his own faulty operational design and poor management, what greedy bastard Tony Fernandez meant as poor service and high charges is for free landing and parking charges!

Who should pay for landing and parking fees?

EVEN before the new permanent low-cost carrier terminal (LCCT) can be constructed, AirAsia and AirAsiaX are already asking not to pay landing and parking charges. That may show the two are fast in their forward planning but should the request be even considered?

There is a cost to building the LCCT even though the government may be forking out the investment. There is also a cost to maintaining the facilities and providing services to airlines. Who should pay for them?

Naturally, airlines and passengers. These are the two groups of the many groups that use an airport. Landing fee is a charge paid by an airline for using the runway. Parking fee is for using the tarmac and taxiway.

In boom times airlines expand and that means more income for an airport operator. But the weak global economy has been hammering airlines and forcing them to make cutbacks.

Route cutting hurts airports financially because they lose the landing fees, parking payments and other revenue associated with the lost flight.

AirAsia’s view is that airport operator Malaysia Airports Holdings Bhd (MAHB) should be able to make enough money from shoplot rental income and passenger service charge to pay for facilities maintenance and the carrier should be allowed to fly for free in and out of the new LCCT@KLIA. [Such claims is false. Commercial income is meant to compensate lost on income for MAHB to entartian Government request for charging below cost for passenger.]

That demand may be far-fetched as no airport in the world practises free landing and parking for commercial flights as airports incur maintenance fees. More so, aeronautical charges have been on a decline.

If that model of free landing and parking works, then Singapore’s Changi Airport should be the first to waive its fees for it has more shoplots than KLIA. Malaysia’s parking and landing charges have not changed in the past 27 years. It is one of the lowest if not lowest in the region.

Even Changi cannot beat that pricing. Also, MAHB has time and again offered incentives for airlines to spur growth at the airports it manages in the country.

AirAsia has been a beneficiary of the incentives and got a five-year waiver when it moved from Subang to LCCT@KLIA. The discounts were staggering.

MAHB is now working on a new incentive programme which would really make airlines sigh in relief in the current trying times.

Hopefully the new incentives will meet AirAsia’s needs midway. Just imagine this - if AirAsia manages to get a waiver, rival Malaysia Airlines is not going to take it lying down.

MAS will be screaming for the same perks and so will the 46-odd airlines that fly into KLIA. If that happens, MAHB might as well turn into a charitable organisation instead of a listed company that is answerable to its shareholders.

As a business entity that offers services, MAHB has to be fair to all its clients and it will not make economic sense to give one party free rights and make others pay for the same rights.

But AirAsia’s rationale for the request can also be understood. Had it got the rights to build its own airport at Labu, it would not have to pay for landing and parking. [What right? As Bumiputera, maybe I could own my own Airport too? No Airline operatesits own Airport! Focus la ...]

But a decision has been made for a new permanent LCCT to be built near the main terminal building at KLIA and MAHB will operate it.

That new airport needs to be maintained and those using the services have to pay. It is a simple model of pay per use.

Perhaps AirAsia should consider asking for a discount rather than an outright waiver. Its chances for the former may be better.

I thought this article is too diplomatic and most underdeserving for a cheap pariah like Tony Fernandez. He only understood a rude "No and Get Lost"!
at 3/09/2009 04:30:00 PM

I don't travel air asia yet, don't know tony is the one who pariah air asia's cheap fly. I always travel 1st class in Mas economy.

Sir, You are too kind.Pirates understand the laws of the Seas only.
Labu is a Red Herring.

The unseen hands can be exrapolated to the family.
BTW the kind,homely family would be on a long taxpayers paid vacation from 3103.

PWTC basement recently was flooded.
Can any one see the connection ?
arjun.


KUCHING: A former Air- Asia station chief is under investigation for sexual harassment. A report was lodged by a 31-year-old stewardess last month against the suspect who is in his 40s. The stewardess claimed the suspect took her to his house at Taman Woodlands and tried to remove her uniform on Jan 5. She managed to stop him by telling him that she was having her menses then. Police sources also said the suspect was sacked after the report was lodged. Kuching police chief Assistant Commissioner Wong Wai Loong said the suspect was out on police bail.

Tony wants everything for free so that he can kill off MAS and after that he can hike up his price later when he is in a position of monopoly.

We are going to waste another RM2 billion to build another LCCT for AirAsia. Why not just use this money to subsidise all airlines to use KLIA which is getting underutilized? I know, getting cronies to do the job and making easy money is more important.