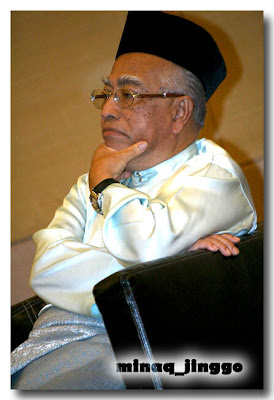 With much attention on the UMNO Disciplinary Committee meeting and press conference at PWTC this afternoon, words of old Mahathir strong man, Tan Sri Sanusi Janudi to be brought into Najib's cabinet missed the rumour mill at The Mall and PWTC.

Sanusi Junid is believed to be slotted for a national security advisory role with a Ministerial status by Najib.

If the appointment of three advisers to the new Perak Menteri Besar is a new administrative practise, Najib may be appointing several former Ministers from Dr Mahathir's former cabinet member in various advisory roles.

Sanusi, who was dismissed by Abdullah Badawi last year from the post of President of International Islamic University of Malaysia, maybe given senior ministerial status to advise specifically on domestic security and civil defence.

Given the availability of more Senatorial vacancies following Zaid Ibrahim's resignation and takeover of Perak by Barisan Nasional, he maybe filling up one of the slots.

Sanusi is most associated with the Agriculture Ministry and later as Kedah Menteri Besar under Dr Mahathir's administration. However, he spent considerable years in the Home Ministry as Deputy Minister under the infamous King Ghaz or Tun Ghazali Shafie and was tasked with several key security issues.

Known for his decisiveness, and out-of-the-box creativity in solving problems, Sanusi could be the much needed person to handle the rising theatrics that lead to public unrest orchestrated by his former MCKK protege and ABIM associate, Anwar Ibrahim.

In addition, the home ministry has been getting much flack from the public for its poor handling of the ISA arrest last year.

If there is anyone with the firm hand and negotiating skill needed by Najib to handle the rising domestic insecurity from excessive politicking from the opposition, it would be Sanusi. His reknown language skill in Tamil could help placate the problem with Hindraf.

What will be left of Dato Syed Hamid, the current Home Minister?

Interesting enough, Syed Hamid replaced Sanusi upon his resignation from the Chairmanship of Youth organisation, MAYC some few years ago. With his support, he helped twart off challenge by Zahid Hamidi.

Since then, MAYC has been on the downhill in its organisation. There has been much complain from the Sanusi quarters and veteran activist in MAYC of alleged impropriety in the sales of certain MAYC properties.

Given the situation, Syed Hamid is unlikely to remain as Home Minister upon Sanusi's appointment.

Syed Hamid is running for UMNO Vice President but his campaign is facing a major setback recently following the sudden resignation of his Political Secretary, Dr Abdul Razak Omar over disbursement of campaign expenses.

His chances is slim in view of the stronger contenders of Hishamuddin, Zahid Hamidi, Shafie Apdal, Rais Yatim and Isa Samad.

Syed Hamid is on politically shaky position at his Kota Tinggi UMNO Division and follwing the loss of Pulau Batu Putih to Singapore for which he is blamed, and alleged involvement in the contract and license to supply sand to Singapore in the controversial scenic Johor braidge cancellation.

Najib could be doing a major purge to kill several birds with one stone by placing Sanusi as Ministerial status adviser. Off course, any announcement and confirmation on Sanusi's appointment will have to await Najib's swearing-in, which is expected on April 3rd.
at 3/17/2009 04:45:00 PM

Looks like things are getting brighter by the minutes.

Sanusi Junid was among my idols those days. However he is much too old for the job, no longer enegertic and the government will be most unfair to him with that appointment.

He should be a member of a special advisory council ala Iranian administrational structure to serve the new government.

If there should be a security advisor, then the person should be a former high ranking military officer and Najib was a defence minister, there4 he should know very well whom should be the man. Remember Sauk?

That gungho guy is available...at least kasi la chance sama dia sebab the other day his appointment as the Chief of Defence Forces was eclipsed by his junior...

Sanusi was (perhaps still is) a politician so let him do the political thingy while let Zaini the military man do the military stuff...

I see danger ahead..

"Sanusi for National Security Adviser?" what a joke!

We need true nationalist like sanusi junid back in to revive the pathetic state of the nation fromteh washy wushy state under dolah bodowi.

We can't rely on the weak, corrupt and self serving idiots like Syed Hamid, Dolah and Noh Omar

I like to see him dump Anwar Ibrahim in prison and throw away teh keys to eternity.