Mazlan Harun: We are not here to stop Najib 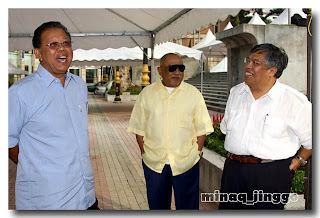 They impressed to the packed room that their intention is not to destroy or inconvenient the party but for the single minded purpose to arrest and rectify the declining credibility of UMNO to its members, Malays, people and opposition.

Dato Mazlan explicitly expressed that they have no intention to deny the scheduled handing over power from Abdullah to Najib. “This has nothing to do with the transfer. They can do the transfer any time they want.”

They reminded that they had made a report with the Federal Territory ACA on September 4th, 2008 on the issue of money politics and misuse of power on the Prime Minister and Deputy Prime Minister.

Since the PM had successfully establiseh the MACC and vouch for it's independence and credibility, they questioned PM's statement that all report and cases against UMNO is closed. Mazlan and Kadar had yet to be called in to give their statement.

They also questioned UMNO's relegation of duty to investigate corrupt practise in UMNO to MACC, which will lead to a court case if there were sufficient grounds. This is in contradiction with UMNO's Constitution that disallows members to bring any dispute to court.

Mazlan and Kadar stressed Tengku Adnan's statement seeking all cases to be cleared before the assemby begins on March 24th, 2009.

When asked of them automatically losing their membership and the locus standi to institute a court injunction, they are studying the matter and believed there is a manner for it to be done.

The Malaysia Insider report below:

PETALING JAYA, Mar 3 – With less than a month before Datuk Seri Najib Razak is scheduled to take over as Umno president, two party members said today they will file for a court injunction to stop the Umno general assembly scheduled for the end of this month from being held.

The two members, Datuk Kadar Shah Ninam Shah and Datuk Mazlan Harun, said they hoped the assembly would be postponed until all allegations of money politics are investigated.

The move by the duo was seen as an attempt to stop the party from endorsing Najib’s leadership. Najib has won the Umno presidency uncontested and will be confirmed as party president during the general assembly.

But Mazlan shot down the suggestion that they were trying to stop Najib from becoming prime minister, saying that the transition plan could be completed anytime.

“We are not here to stop (Najib). Everyone who loves Umno must take this matter seriously. The process must be completed according to the party constitution and the law. We are not involved in the transition plan, it can be completed anytime,” Mazlan told reporters.

Kadar, who was elected a delegate to the assembly and Mazlan, a former Umno Youth executive committee member, had also lodged two reports last year with the then Anti-Corruption Agency against Datuk Seri Abdullah Badawi and Najib for alleged involvement in money politics.

“To date there has been no action on either report. There has also not been any apparent action on the more than 1,000 reports of political graft and other abuses sent to Umno’s Disciplinary Committee, as acknowledged by its chairman Tengku Ahmad Rithaudeen,” said the duo in a joint statement.

They also slammed Abdullah for his remark recently that the Malaysian Anti-Corruption Commission had closed the investigation on all reports regarding money politics in the party as they found no evidence.

“How can they declare the cases are close if none of us were called to give our statement?” said Kada.

They added that the party secretary general Tengku Adnan Mansor has also publicly stated that all reports on corruption must be investigated before the assembly.

They claimed that if the assembly goes on before investigations are completed it would lead to instability.

“We would have another crisis on our hands if it turns out that people we elect subsequently turn out to have obtained their positions illegally. Worse still if they are already in government,” they said.

“We are considering seeking a court injunction if the cases are not solved before the assembly,” said Kadar adding that they would wait for party leaders to react to their move.

PETALING JAYA: Two Umno members have threatened to apply for an injunction to postpone the upcoming Umno general assembly this month if the party is not serious in curbing money politics.

They claimed that no investigation had been carried out over two reports they had lodged last year against Umno leaders.

“To date, there has been no action on either report. There has also not been any apparent action on more than 1,000 reports of political graft and other abuses sent to the Umno disciplinary board, as acknowledged by the board’s chairman Tan Sri Tengku Ahmad Rithauddeen,” Mazlan told a press conference here Tuesday.

He denied that the injunction was being planned to stop Prime Minister Datuk Seri Abdullah Ahmad Badawi from handing over power to his deputy Datuk Seri Najib Tun Razak.

“This has nothing to do with the transfer. They can do the transfer any time they want,” said Mazlan.

The Umno General Assembly from march 24-28 would also include party polls. Abdullah has already declared he would not be defending his presidency, while Najib is the only qualifying candidate.

Asked whether they had the support of grassroots, Mazlan said: “If they think that is for the best, they will accept it. The Malays will agree to this.”

Mazlan also said they were prepared for any disciplinary action as they believed they had a prima facie case.

“I don’t mind (if they want to strip me off my membership) because there are many Opposition parties waiting for me but ‘saya sayangkan Umno’ (I love Umno),” he said.

Describing money politics as rampant in the party, Mazlan said the injunction was their last resort as they had spoken to the leadership “directly and indirectly” on the issue.

“But it seems like none of them has the willpower to change the situation,” he said.

Hi Voicey,
I think its a noble idea, a throw back to the days when UMNO had a great deal more credibility, but alas, much to no avail,as come this April, and to no fanfare at fall from this side of the universe, it seems certain that Dato Seri Najib will be Malaysia's next Prime Minister.

Yes, yes, that is my resignation to this fate. Takdir. Takdir. Woe is me.

The corruption issue has been in UMNO for the last 22 years when Tun M was there and worsen during the last 5 years when Adbullah Badawi was the PM.

If these 2 blokes want to ensure UMNO clean up, it may take few more decades, which mean there will be no UMNO assembly in the next few decades. Which means also, Abdullah will be our PM for the next few decades (if he can biologically and physically survives).

AoB,
I think there should be no issue in stopping Najib if PAU is not going to be held this coming weeks.

For generations of PM, they resigned not in any PAU. Although TDM announced his resignation, his real retirement was not during PAU.

Should be or not, as promised by Pak Lah, come this month, Pak Lah will and should resign as PM.

In the event Pak Lah resign, Najib will hold the PM position, the same with previous PM and TPM in Malaysian history.

I will say it again, you two filthy rich stupid old men...go and enjoy yourself with your sugarbabes...what cannot anymore? dah tak naik ker....

the only way for UMNO to eradicate corruption is to let Najib to become the next President of UMNO ... since Pak Lah is a proven loser, extending his term and denying the new committees to take over will make it worse