Deep Throat's lead for MACC on the stadium collapse

Luckily, it didn't happened during the Sukma Games last year. One can't imagine if the Sultan was present at the royal box when it happened. There was an international endurance event held there last year or so with the presence of Arabs and our royalty too.

Alhamdulillah, no one died from the collapse. On the collapsed day, there was supposed to be an inter-varsity games but was cancelled. It could have an international disaster.

Deputy Prime Minister Tan Sri Muhyiddin Yassin was angry and he felt the contractor for the Sultan Mizan Zainal Abidin stadium should be taken to task, if it was proof to be guilty of negligence.

Terengganu Mentri Besar Datuk Ahmad Said, whose under political pressure from the group aligned with the previous MB, was obliging to the reporters to drop hints. This is his opportunity for a political relief.

MACC came in fast to investigate. Works Minister Datuk Shaziman Mansor expressed his ministry's wilingness to cooperate. He gave assurance there would be transparency and nothing should be hidden.

A deep throat from Kuala Terengganu called last night. Deep throat is a contractor who initially had interest to bid for the project but decided not to bid. "Oghe cup doh, buang masa abe," he said.

Some of his information are fuzzy and may not tally with the news report. But he gave valuable leads and it should be useful for MACC.

It is the existence of occurance like in deep throat's information that makes distinguished former civil servant, Tan Sri Ramon Navaratnam up in arms with politicians. He cited the incident as another example of a waste of public funds and poor implementation of the tender process.

“Prima facie, the collapse could be due to poor structural design and construction," he was quoted by The Star. As Chairman of the Centre of Public Policy Studies, he demand a public enquiry.

There was no apologetic voices. The State Public Works Department deputy director Ghazali Hashim was reported in The Star saying the roof is still under warranty period.

This is the strange and dangerous part. They claim they have not issued any certificate for the roof. But, the stadium was used for the Sukma Games based on a recomendation from "a local consultant".

According to deep throat, the Exco member in charge of the state public infrastructure program under Idris Jusoh is Dato Wan Hisham.

He is brother to the losing BN candidate for the Kuala Terengganu by-election last year and former Deputy Minister of Internal Affair, Dato Wan Farid. Wan Hisham was also exco for tourism and the annual grand event, Monsoon Cup.

Deep throat said there was pressure from the MB on the state JKR to push the stadium to be ready in time for June 2008 Sukma Games.

That is understandable but did the state JKR relented to political pressure to the extent of compromising safety? If the hiring of "a local consultant" is any indication, state JKR did not dare to certify the stadium safety themselves then.

Who is the architect, contractor and consultants involved? Whose head are we going to chop? Or whose head is going to be saved?.

The information on the stadium in The Star report is as follows: 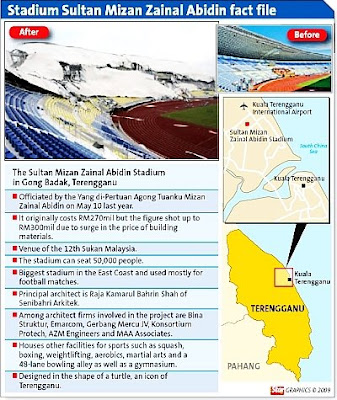 "The stadium is part of the modern Gong Badak sports complex, which was built at an initial cost of RM250mil but the amount surged by an additional RM50mil due to soaring prices of building materials.

The indoor stadium, which is also part of the complex, was built at a cost of RM160mil."

That is what's disclosed for the public, claimed deep throat. Among the community of Terengganu Contractor's, it is known that a Bumi-controlled PLC made a tender bid to build the stadium at RM130 million. The company is owned by a self-made Terengganu businessman and be referred as Company A.

But the project was awarded to a company and their consortium, which will be refered as Konsortium K. The Consortium was awarded at an inflated price.

Deep throat could not be specific about the inflated price but he mentioned it as either RM160 or RM190 million. Konsortium K subsequently hawked the project in Kuala Lumpur to sell at Company A's bid price of RM130 million and cashed in the balance.

Most complaining contractors during Pak Lah's administration spoke of the rampantness in the use of such modus operandi.

According to deep throat, there was an additional Variation Order (VO) of RM200 million in the picture. He is not clear whether it is for the whole sports complex or stadium alone. Logically, it is for the whole complex. The justification used for the VO is believed to be for the general election and the fast track nature of the project.

Deep throat left a clue for MACC. Follow the money trail into Emarcom and Gerbang Mercu. This could lead to an ambitous young man, brothers with 'wants', a youth with an ugly nickname and some big people.

Hope Dato Najib's administration take a stern and swift action to send the culprits to the slammer. This will show to the people he is dead serious about cleaning up corruption. The Terengganu people will appreciate his action for it shows he value their life.

Deep throat's info needs to be verified and the details are withheld. Nevertheless, the information should give lead for MACC to work on.

In the meanwhile, one is innocent until guilty.

KUALA TERENGGANU: Several Malaysian Anti-Corruption Commission (MACC) officers were seen photographing and interviewing witnesses at the site of the collapsed roof at the Sultan Mizan Zainal Stadium in Gong Badak.

Four plainclothes officers, including state MACC director Ahmad Sabri Hussin, were spotted at the site between noon and 1pm. 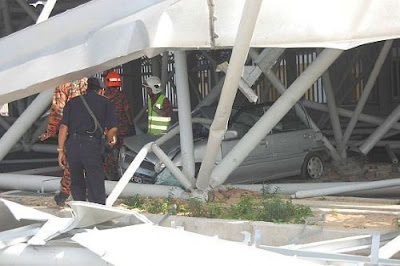 Potential write-off: Several firemen inspecting a car which was damaged by the collapsed roof of the stadium yesterday. — Bernama

When approached, one officer said a probe had been initiated into the awarding and managing of the contract to a South Korean construction firm which was responsible for the work.

“We are probing whether there are elements of graft and mismanagement,” said the officer who requested anonymity.

He said the MACC would focus its probe on the awarding process of the contract.

Asked if politicians and senior government officials had been involved in the awarding of the contract, he said: “It’s still premature and I don’t want to elaborate on this.”

Some 60% of the stadium roof collapsed and the impact severely damaged other parts of the building.

Construction of the RM300mil stadium, which began in 2005, had hit a snag midway apparently due to technical glitches.

The contractor was to hand over the sports complex in April last year to the state government for Sukma, which was held from May 31 to June 6, but delivery was only made a month later.

In an immediate response, Works Minister Datuk Shaziman Mansor said his ministry would cooperate with the MACC and that it would be transparent, adding that it had nothing to hide.

“I am more concerned about our image being sullied abroad and I welcome MACC to investigate,” he said.

Batu Burok assemblyman Dr Syed Azman Syed Ahmad Nawawi said the matter was of public interest and that the MACC should centre its probe on the involvement of “high-powered individuals”.

Meanwhile, some 5,000 athletes representing 20 higher learning institutions who were to converge at the stadium for a sports meet had to go to a different venue at the last minute.

The organiser’s spokesman Zakaria Ibrahim said the event would go ahead as planned.

When you wrote, "Deep throat's info needs to be verified and the details withheld. It shoudl give lead for MACC to work on. Remember that one is only guilty until proven.", I hope you meant that "One is innocent until proven otherwise" since that is the principle our coun try works on. Sorry for being pedantic, bro.

I wrote in in a hurry for an appointment. Made lots of typo and grammar lot mistake. I am sure you understand the information I am sharing.

somebody moay thai prize fighter with a russian made gun will be very upset. Let see who got balls and whose balls are gonna go!

Yes, I do get what you're saying, bro.

Maybe this is the tip of the "Monsoon Cup" Iceberg....gone Horribly Wrong!

Everyday there will be another Divine Intervention & Revelation.

Deep throat left a clue for MACC. Follow the money trail into Emarcom and Gerbang Mercu. This could lead to an ambitous young man, brothers with 'wants', a youth with an ugly nickname and some big people.

brothers with 'wants' - Could it b ethe Wan bros - Wan Hisham and Wan farid?

some big people - my guess is Pak Lah and Idris Jusoh

Now what do I get for as a prize?

Actually, it is EMARCON and GENGGAM MERCU. The main partner in the consortium was Bina Struktur Sdn Bhd.