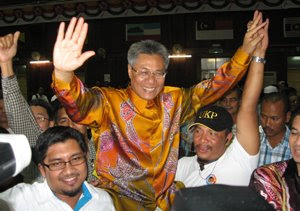 Prior to March 2008 General Election, PKR had only one seat in Parliament. If it had not been Abdullah and Khairy's fault, among others, the tsunami would not have occurred and PKR would be, to borrow Khairy's word, buried into the pages of history.

Events turned out in their favour and they not only survived but obtained the highest number of seats in Parliament among the opposition parties. That good streak seem remained.

If it had been a baseball game, PKR candidate, Dr Mansor have got his 'strike three' out order. He won in his fourth attempt for public office and will be assigned the Malay allocated post of Deputy Chief Minister I (DCM 1) to replace Fairuz.

The claimed 'non-racial' Pakatan Rakyat arrangement for Penang is an Indian Speaker from PKR, Penang is for DAP Chief Minister, Malay DCM 1 from one of the Malay PKR Assemblymen, and Indian DAP DCM 2. (I stand to be corrected)

Many see Anwar managed to replace the earlier DCM 1 with someone from his inner circle. The problem is the process is not seamless. Was it reflected in the Penanti by-election result yesterday? Maybe it did, but blogger Anuar Mohd Nor here see the result only shows both side are well entrenched in their respective areas.

Saifuddin Nasution is aware that the politik wayang has reached it's toll. The public is tired with political psy game. Only Nizar is hoping it still work and trying hard to keep the momentum till 2013/14.

Whatever it is, UMNO needs to buck up and do a massive facelift. The voters may have reservation of PKR and Anwar, but they are not yet ready to return to UMNO. The same, even if he is found guilty for sodomy in July.

The perception is Fairuz was "fixed" from within PKR and no one can do any fixing without the bosses clearance. For instance, the "fixing" of Elizabeth Wong didn't work because Anwar was non-committal and divided between the pleasure of Wan Azizah and the demand of Azmin Ali.

There was a police report made against Fairuz by Angkatan Muda Keadilan (AMK) for alleged corruption. In political speak, it is shooting your own feet. There have been murmurs on the ground against Fairuz's exuberant spending for luxury cars, indiscipline and the allegation of being on the take in that quarry deal.

However, the allegation is refuted by MACC and Anwar was without an excuse. It reflected irresponsibility on the part of PKR. Astro Awani described it as Hotel Demokrasi, where elected assemblymen could check in and out at will. Earlier it was Arumugam at Bukit Selambau, Kedah and now Fairux Khairuddin at Penanti, Penang.

PKR conjured up an excuse that Fairuiz is pursuing further education abroad. It's too ridiculous to believe. Why return to school in mid-term of public office? Fuziah Salleh could only give the excuse Fairuz can't take it any more to Dato Ruhanie's onslaught on Astro.

It was revealed later by Anwar himself that there was no such excuse and Fairuz was asked to resign.

A matter hanging is Fairuz demanded his name cleared within two weeks. That time has long passed. Will Fairuz resurface in the future?

In Malaysian politics, it always do. It is just like independent Aminah raising issue on PKR Dato Zaharain allegation that he trumped up 11 charegs against her to suspend her membership in Keadilan.

Coming to the question of PKR performance yesterday, did it reflect anything other than Anuar Mohd Nor's conclusion that both sides are fortified in their own 'area'?

Expectedly Anwar Ibrahim claim the victory as peoples' mandate and support for PKR. Is it really so?

Read the subsequent analysis by refering to the simple tabulation below:

According to blogger Dr Novandri Hasan Basri here, it is the beginning of the end of PKR's good 'luck" from near termination before March 2008. Whilst, anonymous journo-blogger Mesin Taip Buruk here described the victory not worthy of being proud off.

A noteworthy observation is the almost 1,000 votes taken away by the Independent from PKR. Where would the 36% missing voters be, if Barisan Nasional had run? These are indications.

In Bukit Gantang, the Malay votes for Pakatan Rakyat showed a drop. As for opposition stronghold Bukit Selambau, one of the two high Indian population area in Kedah, it was due to the clear split in Malay votes.

A glimpse of PKR's internal view of the results in Penanti and other areas could be seen from Saifuddin Nasution's statement in Sinar Harian dated May 21st 2009. He said PKR is changing its campaign strategy from 'menyerang' (attacking) to 'menerang dan memujuk' (explanation and persuasion).

The recession will be sinking in and it will be difficult to keep the peoples' attention on politics with their wallets lightening. The political perception game of endless blame on others will be over soon. The determinant will be the deliverables and it involves economics.

Before making any claim of optimism, BN has to win over the opposition stronghold Manek Urai.

If Najib could turn around the economy, the momentum of politik wayang will run it's course. UMNO and Barisan Nasional could come back but they have to not only be seen but actually swallow the bitter pills.

They have to undertake the necessary internal and external reform in UMNO. The public faces, from the national level to grassroot, that represent UMNO must 'behave' and able to articulate well in order improve public perception of UMNO.

There are many questionable characters within UMNO's Supreme Council but irrespective, there is no other choices but for a massive facelift. UMNO needs to regain voters confidence at the grassroot level. To regain public confidence, the voting public demands nothing less than the heads of many big names, involved in money politics, power abuses, and corrupt practices, be chopped.

The party grassroot need to reenergise with dedicated, sincere and working grassroot leaders and not the ever bickering warlords!
at 6/01/2009 10:30:00 AM

Our present state of mind..or present domestic situation has been karmically determined up to this point by life situations in the past...

If you are captivated by the past, then you can't make a move...You are burdened by the heavy Karma of the Past all the time...

Can UMNO Member have the slightest doubt about their existence, the faintest suspicion that it could be changed...Any progressive mentality, rebellious approach (i.e: Dato' Sak), revolutionary approach (i.e; The Scribe)...That breeds further Freedom and Change not undermined by the heavy Karma of the Past?....
UMNO needs people with open minds or they will remained entrapped in Karma..

You have the free Choice to Choose!

PR's good fortune running out?
Not yet lah?

BN is always contributing towards PR's luck with actions like these.

The info was picked up from Anil Netto's blog.

With such incidents, you think BN can win big?

“Fr Jean Claude have been called in by the police for an ‘interview’ at the Triang police station tomorrow, Friday (22/5/2009)… Allegedly the instructions come from the Inspector General of Police (IGP)..

Last Sunday at 4pm, there was a special mass (prayer service) at the St John’s Chapel in Triang, i.e. that 83 year old chapel, that the Pahang Government is threatening to demolish.

Lots of yellow coloured St John’s Chapel parishioners were there, and there were many more persons that came from other churches around the country to show solidarity.

After mass, there was food and drinks served, and a little talk by me on Freedom of Religion.

Now, the police has called in the Parish Priest, Fr Jean Claude Lourdes, for questioning tomorrow.

What are the police doing? Trying to put some psychological pressure to stop this desparate attempt by this community to save their 83-year old chapel? I wonder..

Why is this old chapel being targetted for destruction suddenly…something is amiss.

Is there some corruption involved? Maybe the anti-corruption body need to just investigate to be sure…

Or, is it just some form of ‘punishment’ being meted out to the Catholic community in Triang? Why? Because of the problems that the Catholic Church been causing - i.e. that Allah case, the conversion and religious rights issues..

Maybe, it is because the church sits in that odd seat that has repeatedly elected a DAP ADUN - but then the MP, is BN Minister Ismail Sabri Yaakob…

Najib is from the Pekan Constituency, adjacent to the Bera Constituency, and I believe our new PM should step in and ensure the continued existence of this little chapel which has served the Triang community as shelter during bad times…”

For whatever had been said still the obvious fact is that BN don't have the guts to put a candidate in Penanti. Maybe it's still 'nanti' for BN. This is not the UMNO that I use to work for and surely not the UMNO members are hoping for. Maybe like an old man, UMNO is an old party and as the old man, the teeth start to decay and falling one by one. Now as the old man UMNO is toothless.

I agree with you in your last 2 paragraphs.
Those with questionable character and who are undependable to portary good image of the party simply have to go, if they love the party more, either willingly or otherwise. Just go to anywhere they like as long as it is not politics or holding any office.
This is the only option left not taken to get UMNO back in business. But will UMNO do this? I guess not and I guess UMNO is not serious in reform either. So be it.
I believe there are a few honourable ones who can take over.
Looking at the many situations from the fence, I could only offer this sincere advice. I am not taking sides here, I just feel the people deserve better. I for one, love to be spoiled for choice when election comes. Only then can we say 'the best man wins'.