The police we trust, Your accomplice we don't 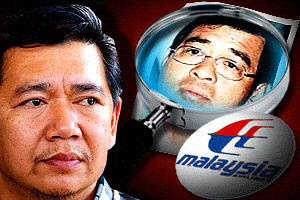 Whether it is his stubborn Bugis blood or salvaging lost pride, it is pathetic to see Raja Petra's last ditch effort to defend his loss cause to frame Tan Sri Tajuddin Ramli with that ridiculous claim of RM8 billion loss during his Chairmanship at Malaysian Airlines (MAS).

In his posting, MAS lost discrepency, his reply to the annual accounts proof that we presented is to spin and attempt to entrap us as though we trust the auditors more than the law enforcement institution, PDRM.

It is not the police that we do not trust. It is your accomplice in this big lie that we don't. And they are the schemer, lawyer Rosli Dahalan, and the primary accomplice, former CCID, Dato Ramli Yusof.

Now to return the ball back to his side of the court. May we ask as to why he - someone who claims to fight against corruption, purveyor of justice and democrasy, and fighter of human rights - mixing with such unsavory characters?

When Raja Petra jumped straight to claim the police or Ramli Yusof as the person responsible for the RM8 billion lie, it saves us the trouble to explain. The RM8 billion figure came from the following letter: 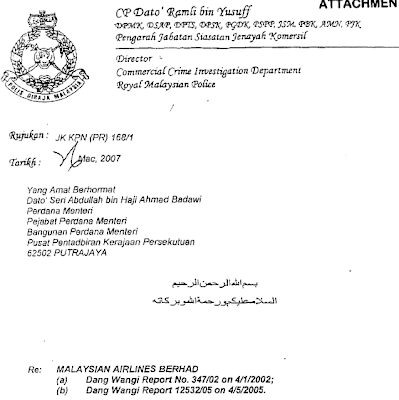 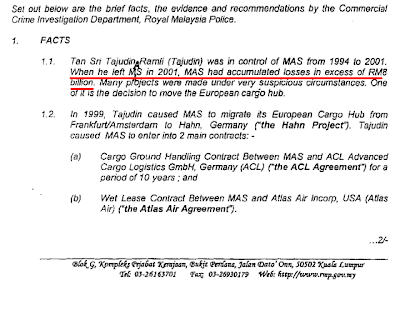 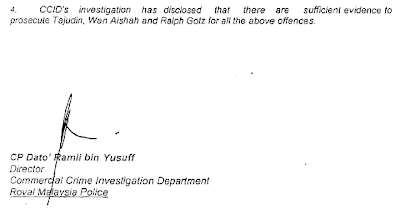 Do read the names this letter was addressed and cc'ed for they are the third level accomplice.

From this letter, The Malaysian Insiders claim that the figure came from within MAS in a police report in 2002 can be debunked. The police report was made by Dr Mohamadon bin Abdullah but it does not mention of such numbers. See below: 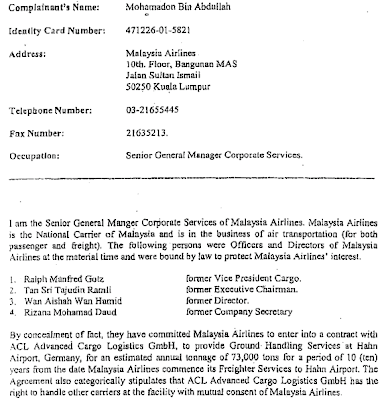 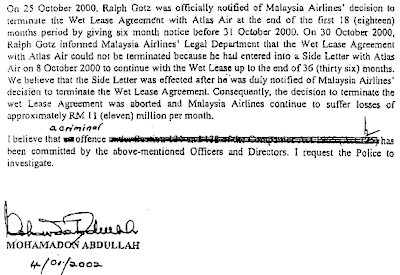 Neither was it mentioned in the police report by Dato Ong Jyh Jong in May 2005 and Shahari bin Sulaiman (to MACC) in May 2009.

The conjured up figure would not have come from MAS. Below is the loss that they knew: 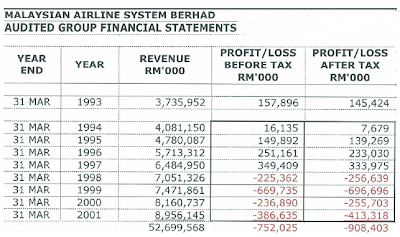 If MAS with all the accounts and documents at their disposal dare not quantify and accuse Tajuddin of such humongous loss, how did the police and specifically Ramli Yusof, trained at UIA in law (not accounting) came up with RM8 billion?

It requires the same level of stupidity to present an accusation with intricate organisation chart and so-called sordid transaction but was dated May 2003 after Tajuddin left MAS? 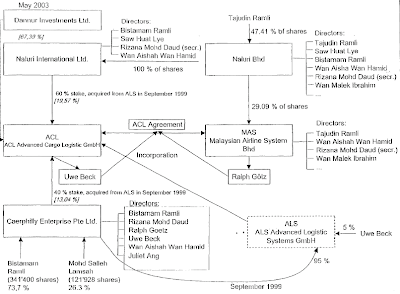 Let's not mind him for that.

But we are not interested to pin people, even how unsavory they are being perceived. It is a grave injustice to accuse someone, be it the murder of a Mongolian or be part of a fraud to create fictitous medical report or now create losses which were untrue.

We will not mince our word to say that this is but part of grandiose skull and drudgery conspiracy of the schemer Rosli Dahlan to fix Tajuddin.

We'll not bother retelling the story again. Read back our past postings below:

In fact, Raja Petra's series on Sarbaini recently had the touch and signature of Rosli Dahlan's vengence against MACC. Read Ahmad Sarbani’s death: the lies and deceptions by the MACC Part 1 to Part 9

It started with Rosli approaching his UIA buddy, Ramli Yusof on his return to Bukit Aman. Enough of Rosli Dahlan, now why is Raja Petra mixing with a crooked cop Ramli Yusof?

For a police who joined the forces in the early 70s at a monthly salary of RM400, how did he accumulate asset of RM7.7 million and never lost money in the stock market? Read the expose by The Unspinners here and here.

Raja Petra could use the court's acquital as defense and he has the rights to. But, it is not fool proof argument. Our court system is littered of judges with no balls to sentence suspects of Money Laundering Act (AMLA).

By half the standard of evidence of our MACC, suspects in Singapore or China are guaranteed prison sentences. However, our dumb judges are protecting corrupts by insisting on proving the corrupt act.

For Ramli's case, it is convenient to have a wife as judge.

More so to have his friend and long time accomplice, Dato Mat Zin Ibrahim befriend a lawyer by the name of Halim Yahya. Mat Zin is the former Kuala Lumpur OCCI. They gang-up together against Tan Sri Musa Hasan.

Unfortunately, this 7 million dollar man blew away his "hard earned" money in a venture with some Chinaman and was facing bankruptcy in May 2009.

Lucky for Mat Zin to get coverage in Anwar Ibrahim's blog. It is not coincidence that Md Zin is now on Anwar's side on his black eye and DNA issues.

Most likely he is not bankrupt anymore.

Is he replacing Robert Phang as attack dog?

Enough is already known of the unsavory side of Robert Phang and Din Merican. There is more in store, if it is convenient.

As for former attack dog, Salahuddin, he is now liable to be sued. He raised about the RM8 billion loss and claim it as big as PKFZ in 2010. 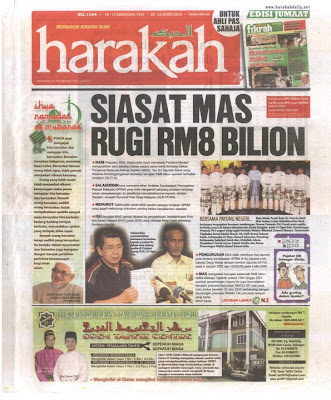 Thanks to Salahuddin, not only Tajuddin may end up owning The Malaysian Insider, he has the option to wind up Harakah and PAS.

Salahuddin and Mahfudz may end up financially unfit to hold political office.

They thought they could do the same on a fallen corporate player. After the May 31st article, they repeated the same allegations on Augst 12th and August 15th. Always do your homework.

The Malaysian Insider don't stand a chance of winning this lawsuit. Taib Mahmud has a lawsuit against Malaysiakini and it is much in his favour. We heard another one is coming.

Telling lies will be an expensive affair from here onward.

Raja Petra thinks by claiming that the Ramli Yusof letter to Abdullah Badawi will save Malaysian Insider because Tajuddin will have to sue the police too. Why bother over a letter that is not publicly available?

Did he not follow Anwar's case where Yusri Ali formerly of Pusrawi could not produce the original medical report?

For curiosity, let's ponder where did Rosli conjure up such number?

Perhaps it could be from within MAS as Malaysia Insider claim. Becuase it must come from someone, who is too used to very big numbers that RM8 billion is meaningless. That someone cannot be from inside MAS. Who brought him or her into MAS?

Could that someone - out to see MAS fail so that they could benefit from it - whispered those sweet numbers to these people? Rosli should know.

Or perhaps he doesn't. If so, he is still a two bit player and there is a bigger Schemer.

We have some idea who. Stay tune after Raya.

Best wishes to you and your family for a very Happy Hari Raya.

And may God bless you with good health and happiness.

Mat Sain...a 7 million dollar man? go and lodge a report with the Macc...man. Macc will mobilise all their personnels and carry out a non-stop 24 hr investigation against mat Zain if an Umno blogger lodges a report.

Go man....go. After all Macc is Umno's political tool.