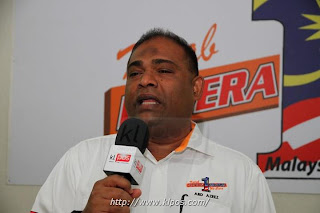 And while Malaysian begin to realise and discuss of the excessive Raya celebration and the overeating from a tradition that started as District Officers giving the rakyat a feast for the first day of Hari Raya after prayers on behalf of the Head of States to be come a corporate event, Azeez was going back and forth communicating and travelling between Yangon/Decca and Kuala Lumpur.

Hopefully this time, he succeed to begin the voyage with 480 tons of aids on September 29th. For many several times, we were alerted of Prime Minister Dato Najib or/and former Prime Minister Tun Dr Mahathir launching his aid mission but was delayed. [Read KLPOS.com here].

Off course, Azeez does not need to make such big publicity and face such casualty as last year's death of Bernama cameraman Noramfarizul (Al Fatihah!), more so the much publicity he is drumming up for his Rohingyas trip.

Give credit where is due. Not many apart from Yayasan Salam and few other NGOs, dare do such feat.

Last one would expect is from Bar Council, DAP, SUARAM, Bersih, PSM, etc. who never gave a damn to the Israelis atrocities on Palestinians. Anwar Ibrahim and PKR only gave token concern as they fear to another Apology Tour to the power with interest on Myanmar.

Give Azeez a break to be a politician and do what politician do. As long as he keeps the public up-dated and appreciate the difficulty he has to face, he should be fine. It is not an easy task.

What many did not know, Azeez paid for Noramfarizul's badal haji (paying someone to do Haj for a deceased) last year. In Ramadhan, he managed to arrange for both his parents tickets for Haj this year.

Azeez can't bring back Noramfarizul from the spiritual world for a mistake he has to take responsibility, but one can't give a better replacement than completing his and his parents' Rukun Islam.

Azeez maybe a politician but there is some purity and sincerity inside his dark exterior, which is increasingly resembling the dark skinned Rohingyas.

The challenge to help the Rohingyas must be appreciated. The Rohingyas of Myanmar was described by the United Nation as "the world's most persecuted and oppressed  ethnic minority."


This blogger had the opportunity to attend a close Hari Raya celebration and meet a group of local Rohingya organisation.

If only our Samsung Tab had not broke down few weeks ago and pictures taken was not wiped out during servicing, we could share it here. However, one can read and keep track of the issues and development and images of the atrocities in this blog belonging to the Majlis Ulama Rohingyas. [Read here] 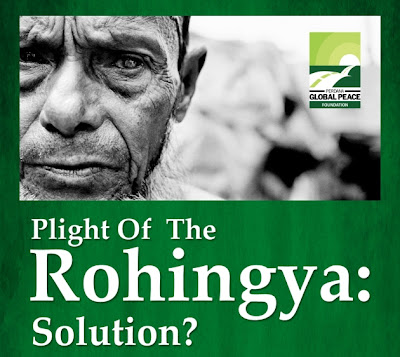 
In his keynote speech, Tun Dr Mahathir expressed the need to find the solution to the plight of the Rohingyas. and not merely "to condemn anyone." He explained that Malaysia had a similar immigrant problem but a solution was put in place.

The problem and genocide on the Rohingyas did not receive sufficient international media attention. During the discussion, Dr Mahathir also commented that he does not understand the problem deep enough.

Plight of the Rohingya

WHILE the root causes of their problems lie inside Myanmar, the plight of the Rohingya has no boundaries, which was reason enough for the Perdana Global Peace Foundation to organise an international conference at the Islamic Arts Museum in Kuala Lumpur on Monday. But when the Myanmar president already has a solution which has the backing of monks on the streets of Yangon and Mandalay, convening a conference to seek solutions may seem a little presumptuous and meddlesome. When people do not meet the criteria for citizenship, it does make sense to treat them as illegal immigrants. In which case, the "only solution" is to expel them. But, then again, as this solution has created problems in the form of the hundreds of thousands of refugees who have sought shelter in other countries for decades, there is good reason to come together to come up with other solutions, like amending the law to make them eligible for citizenship, as urged by the participants at the end of the one-day conference.

Unlike the other ethnic minorities, most of the Muslims did not settle in Myanmar before the British arrived in 1824. Neither are all the Muslims in Myanmar the Rohingya. But these direct descendants of the immigrants from modern Bangladesh are certainly not new arrivals, as they have lived in Myanmar for more than a century before it became a modern nation-state. As such, the Rohingya rightfully call Myanmar their home and should not be regarded as aliens. Recognising them as citizens, as proposed by Tun Dr Mahathir Mohamad in his keynote address, and allowing them to stay and live there is the honourable and preferred solution.

But what Aung Sang Suu Kyi said in Washington on Tuesday about the National League for Democracy not being in a "position to decide" as it is not the "party in power" is doubly true of a conference of solution-seekers that provides an outsider's perspective. Nevertheless, as Myanmar has shown itself ready to "transform", as the former Malaysian premier put it, there is hope that it will revisit the 1982 Citizenship Law. The international community should certainly work with all the leaders in Myanmar. As the Nobel laureate and democracy icon is being honoured with a Congressional Gold Medal on her American tour for her "leadership", commitment to "human rights" and promotion of "freedom, peace and democracy", it is only fitting that she takes "an unequivocal and proactive role'' on the Rohingya issue, as urged by the conference. The international community certainly expects her to speak out clearly against violence, intolerance and prejudice. [Read our past posting on Suu Kyi here]

One of the many speakers, a former Amnesty International Thailand researcher Benjamin Zawacki caught our attention.

He described the violence against the Rohingya as "systemic discrimination" in the law,  policy and practices of the Myanmar government. The lack of accountability for civilians and officials makes the violence and violations somehow justifiable.

Rohingya’s sufferings began with the 1978 “Dragon King” operation, where the army committed widespread killings and rape of Rohingya civilians and mass destruction of mosques and other religious persecution, resulting in the exodus of about 200,000 Rohingya to Bangladesh.

Many waves of similar campaign of forced labour, summary executions, torture and rape in 1992, 2001, 2009 and 2012. The current ones involved Government protecting the Rakhines, another discriminated minority to do violence on the Rohingyas.

The citizenship law divides citizenship to three classes of citizens — full, associate, and naturalised. Full citizenship is reserved for those whose ancestors settled in Myanmar before 1823 or are among Myanmar’s more than 130 recognised national ethnic groups.

The Rohingyas is not included in the 130 and none has since received any class of citizenship despite being indigenous in the region of Arakians.

Read on in PGPO blog here.

At the end of the one day conference, they came down with a 16 points resolutions, below:

For Azeez, hope he could get the aids in time and allow the Rohingyas to celebrate Raya Haji. Life could be bleak for them but give them something to celebrate. Give them some hope that there are humans in Malaysia concerned for their plight.

Thanks for post and I do pray that those involved would be given the strength and patiences to see it all thru...

In 1995 when the Bosnian being prosecuted by Serb,Malay sia under Tun Mahathir play vary important role to save them.Tun manage to get the support from Pakistan goverment to supply the deadly weapon call "Green Eyes",paid for not by our goverment by the Saudi billionair,and smuggle into Bosnia by Turkish agents.With this weapon the Bosnia manage to defeated the Serb.

Rohingya need similar help but who want to initiated.Tun no longer the PM.Rohingya issue is not as simple as whatbwe think.We. Have Bangladesh goverment under Sheikh Mujibur Rahman daughter ,stopping all the Muslim NGO from helping Rohinghya living in
Bengladesh.

It was the Americans that help save the Bosnian muslims from the serbs. The US started bombing serb targets when the serbs refused to pull out of Bosnia (one of the targets "accidentally" hit was the Chinese Consulate in Serbia ). Read up on your history and facts. No other muslim country came to the help of the bosnians.

Perhaps your business idea is not realistic and viable, did you not consider that?

Anyway your attitude shows you as one of those selfish and self absorb individual without sympathy for mankind but only yourself.

I hope no one help you and you fail in your business.

That photo of 'Rohingyas burned alive' is actually a photo of the aftermath of a fuel tanker explosion in Democratic Republic of Congo in 2010.

Shouldn't Azeez go and arrange clearance into Rohingya FIRST before announcing it, like a politician?

The two RMN vessels are KD Mahawangsa and KD Seri Indrasakti. Goods were uploaded into and downloaded out from both vessels twice. Yes, RMN normal operations involving these two ships were impaired, because of this mission of uncertainty.

Navy ships are for purpose of the nation. Not to fulfill exercise for politicians like Azeez to maximize the opportunity to be visible, for pre-GE candidacy short listing.

Azeez did maximize the trump card "PM says its okay" and even armed forces got sucked into his schemes.


If Azeez wants to do this in the future, he better learn to plan and get things moving FIRST before getting the TV comes into his living room. Don't be a 'Saudagar Sarkas Media'.

BTW, in Bosnia in 1995, it was different. Bosnia Herzegovina declared independence from the Yusoslavia Federation.

The photograph was taken after an oil tanker explosion in Congo.

The photograph was taken after an oil tank explosion in Congo.

You comment-ers don't know anything about how this religious and hatred war started in the history. It was the Rohingyas who started to behave like many Muslims today. Raping Christian children, kidnapping, taking others lands illegally and more. The situation was unbearable and Burmese people couldn't have done anything in those days until, when a Burmese President was elected. They made a move as fast as possible. The reason why these people face these sorts of incidents are because of their own Religion.