Over at Telekom's Raya open house on Sunday afternoon, the conversation was about how the Minister for Information, Culture and Multimedia, Dato Seri Utama Dr Rais Yatim Phd would react to the You-Tube of the anti-Islam film, Innocence Of Muslims.

Predictably, he did as The Star's SMS news alert came in at 6:30 PM:

Ah ... gawd. Minister Jurassic, that is no way to handle the Internet..

Bet there are people trying to tell him that it is not the way to do it but this draconian dictator of the Information and Multimedia Ministry (Let him have his day on culture. Who cares of culture?) just wouldn't listen.

True enough, Berita Harian reported that the film can still be found on You Tube. 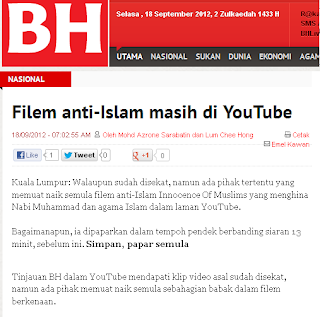 One can sense that Rais did the futile effort to give the impression to the kampung folks that he can't do anything. Bet he is thinking that he could allay the blame to Tun Dr Mahathir for bringing in the Internet and prepared a Bill of Guarantee that would not allow censorship of the Internet.

Probaby he is pondering to himself politically as many of his ex-Semangat 46 mates are doing the last attempt to revive themselves in PKR while he is lost and languishing in amazement to why he is being criticised for the usual thing he has been doing in the past.

Rais basically just do not how the world of Internet works and failed to understand that it is futile to attempt to censor Internet. It is only made worst by his vindictive, manipulative and stubborn nature to refuse to request and listen to advice of those more knowledgeable than him.

If one can't get through to see the sites this language teacher turned lawyer late in life has censored, go to any proxy websites. It is a wormhole that helps one bypass all censored sites. There is also to many proxy websites for MCMC to block.

Perhaps one can also try to use IP hiders to hide certain servers from detecting your country of origin and voila! watch all the movies you want.

The answer to the Internet is a strong communication and if need be, although it is not necessary, a strong propaganda team. A good, accurate and fast reply and debate should answer any slander and allegations.

Why do one have to worry about some B-quality film production attacking Islam? In the first place, there is mountain of materials on the Internet; textual, audio, video and  multimedia, attacking and answering attacks on Islam. Why such old school reaction?

A good communication team should be able to not just answer, but effectively communicate to the right audience with the right message of answer.

Somehow or rather, the focus for a good communication must be to develop media with reputation and credibility. It beats any propaganda strategy because propaganda can be easily dismissed and blow open it's cover.

Good communication educate the public and raise awareness on the fact to an issue. Propaganda and spin only serves to deceive the public and insults the common man's intelligence.

On that note, effort to censor Internet like the amendment to Section 114A of the Evidence Act will not help but stifle the communication practise. Using the law to censor or curb freedom, it would reflect badly on Government. It gives the perception of a repressive and backward thinking Government.

This is something one cannot hide.

It is as futile as Rais trying hard to project himself more as a lawyer. People can find out that that he pursued a degree in language-related subject at the Northern Illinois University of Dekald, Illinois but refused to mention it and only later in life did he pursued law.

No point hiding his humble and but still honourable beginning as Cikgu Bahasa Melayu that later taught Peace Corps how to communicate in Bahasa Malaysia.

While we agree to the amendment's intention to stop the unsavory practise of unsubstantiated  accusation, lies and slander, we cannot agree to the manner it is done. It seemed it was not thought through but authored by someone unable to understand Internet.

Other ways must be brainstormed. 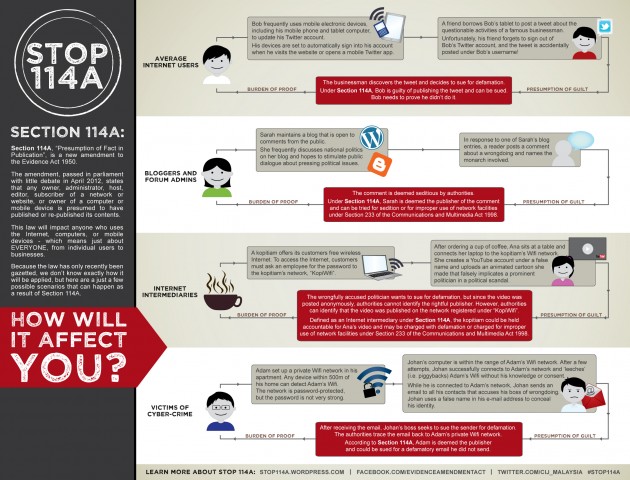 By putting the onus on IP owner, it is diverting the responsibility from the real author of the offensive material to others.

Going after the IP owner is fine for home, office, or perhaps cybercafe Internet users is fine because some form of measures can be put in place to detect and control use by IP owners. But what about Wi-Fi owners?

With knowledge of the password from using it once, any Tom Dick and Harry can come back later and transmit the unsavory message through the Wi-Fi's IP without the owner's knowledge. That is just one example and possibility.

Nevertheless, it will be embarassing to the authority to charge kopitiam owner for offense he or she did not commit.

It is like those printers being charged or sued for content by book authors. How in hell are the usually uneducated printing factory entrepreneurs to know and understand? Even if lawyers are used to vet, it does not guarantee they can understand technically heavy stuff. It is not cost effective for printers. 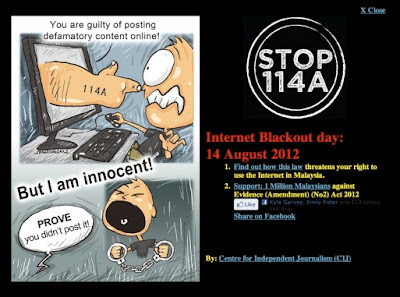 It is impractical, costly and cumbersome for Wi-Fi owner to put in place such controls. Instead of promoting Internet usage, it would discourage Wi-Fi access. It will only make Malaysia alike to some close-minded Middle Eastern community with it's cumbersome and bureacratic mindset of doing things.

In addition, creating more procedures that result in inefficiency and slow things down is also an out-moded way of thinking.

So the Act needs to be reviewed, for the simple reason that it looks like innocent people can be victimised. The law should only meant for the real culprit. It is not a fair and just law when the innocent have to prove they are not guilty. That is not the basis of our legal system.

Thus far, many are already thinking of ways as to get around the amendment to the Section 114A Evidence Act and it is a matter of time, the Act will be deemed useless as per Rais Phd attempt to censor the anti Islam film on You Tube.

Without having to quote opposition, there are BN MPs like Kamalanathan, Abdul Rahman Dahlan, Khairy Jamaluddin and others voicing similar reservation.

If BN is still in power, BN supporters can claim that it will not be abused. What happen if we are not in power and the law falls into the hands of "cocky and arrogant" power megalomanic like Anwar Ibrahim and Lim Guan Eng?

What is the chances that they will not apply and abuse the power? they could even put pressure and influance the court system?

Believe me, they will.

The censorship of Internet and amendment to Section 114A of the Evidence Act reflects the thinking of the Ministry. One would suspect the author of the amendment hatched it from the eggs of Jurassic Park. Censorship and using the law to stem abuse in the freedom of information and expression is an out-dated idea deserve for museums.

The best way to counter slander and lies is through communications and even media freedom, if one have a good and credible media. Do not blame others for one's inadequacy and inability to communicate effectively, tell the truth and at the same time, be credible.

Censorship, curbing and half truth propaganda is not the way to make the rakyat more mature and knowledgeable in forming opinions and making decision on public and political issues.

Instituting law is not the way to cover for the inefficieny of Information Minister or party Information Chief or their instruments of propaganda. It is smarter and better to change them than to change the law.

Frankly, it does not help when the television and newspaper is meant to telecast and report on only the Minister and help campaign for the continuation of his out-moded political existence and draconian vindictive adminsitration.
at 9/18/2012 03:54:00 PM

Bro.
Agree ,otherwise he wont give 4G licence to YTL for free.When telekom complain to him,He said that is not 4G but YTlL continue o advertise they have 4G.

In UK they auxtion the licence and the goverment pocket billion pound?

Rais ni hanya half measures. Just to be seen as doing his work but did not put much effort. He and his KSU is only out there to rape the Ministry.

Good opinion Sir.
I suppport BN but I am fed-up too, seeing this jurassic & his KSU's face in the news on TV, almost everyday.

Short answer to your leading question: No, he doesn't!

But to complete the picture, I doubt that our telecom regulators understand what 4G/LTE and ultra high-speed broadband is all about.