Emir Mavani not out of the woods on his doctorate

So, it is not a British doctorate but Irish. On Irish universities, we could easily check-up with our counterparts abroad. We have an Irish paper from University College of Dublic.

But, a news report in Rocky's blog HERE revealed something that does not bring Emir Mavani out of the wood yet on his alleged fake doctorate. No need to check-up then.

Wonder, who brought the deal to them?
The news report: 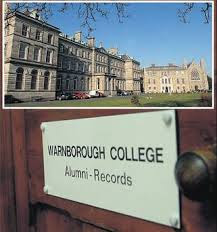 Warnborough College in All Hallows, Dublin

A COLLEGE run by foreign businessmen has been accused of offering effectively "worthless" degrees and doctorates from the grounds of a prestigious third-level institution.

The self-styled Warnborough College is charging up to €18,000 in fees for unrecognised qualifications after renting offices at All Hallows College in Drumcondra, Dublin.

Following inquiries from the Irish Independent, All Hallows confirmed it will not be renewing its rental arrangement with Warnborough.

Using a slick website, Warnborough runs a so-called "distance learning" college where students from all over the world are offered course work over the internet.

Until recently the website included a photograph of All Hallows and made references to graduation ceremonies and seminars that were due to take place there.

However, the Irish Independent has established that the courses offered by Warnborough College are not recognised by the Department of Education.

The courses are also not recognised by the Higher Education and Training Awards Council (HETAC) and the National Qualifications Authority of Ireland (NQAI), which described the qualifications on offer as effectively "worthless".

Neither is Warnborough College, which also has offices in Canterbury in Kent, recognised by the UK Department for Innovation, Universities and Skills as an institution with the power to award its own degrees.

Education chiefs are furious Warnborough College has linked itself to All Hallows, whose degrees are validated by Dublin City University.

All Hallows last night said it was concerned about the presence of Warnborough College on its grounds.

It confirmed it would not be renewing its rental agreement with the college.

Since last July, Warnborough College has rented offices at All Hallows. Prior to that, it had offices above a pub in Bray.

But despite this, the head of Warnborough last night said claims it had tried to link itself to All Hallows were "ludicrous".

Back to the issue raised by Bigdog.

Since Emir Mavani is a newbie in the plantation industry, is it the same guy that have been bringing deals to Emir Mavani lately? Who is the guy linked to? Why hard-up to buy this plantation company?

Is Tan Sri Isa Samad getting sloppy or there is someone else also? His superior is the Prime Minister and it will fall back on him.

Is Dato Najib aware that Felda is his baby and Felda constituencies are vital BN squares on the political board? The general election was just two months away. Are we not learning from the results?

Do not try to please ourselves with the argument that the voters are too hard with their expectation on us. The opposition seemed to get away with their lies and sins. They fact is BN is the Government and a high expectation is good as target to meet.

Najib couldn't careless, as long as his brother and his advisers and people relevant to him make some dough, he would not even be bothered to do his homework.....

Najib failed badly and miserably. He MUST leave before more damage is done...Najib doesn't even meet his KPI...what else is there to say...and Najib has lost the trust of many people, especially the voting rakyat, who, even though was give the rough and shoddy treatment, still voted for him.

And those whom he treated like demi-Gods, abandoned him.....

Salam Bro.,
This posting (and others from Big Dog, etc.) really made my day lah... tak tahu nak cakap pasal ajib gor ni... he's letting his band of crazy people getting control of the treasure-trove of the country like nobody's business! Really he must go - kalau Muhyiddin didn't challenge him, then Muhyiddin pun sama - someone has to come in and save the Malays' interest at whatever cost!! Otherwise its a gone case sampai anak cucu bro.!

It was muhyiddin that did all the dirty work and this piece of red lip just ate up the crumbs,

What more needs to be said, this guy has no balls. Never had to work a day in his life and was born with a silver spoon in his mouth so what do we expect this limp dick to know.

To top it off, we have his other better half who is a glamour queen. Jizzing herself to be pictured with supposed first ladies from failed or 3rd world african nations.

When under pak lah, it was the up and coming assholes who thought they knew better just because they perceived they had a global outlook due to the affirmative action granted to them or their parents.

Now, its the time of limp jib's crooks who are old and still live in 1970. We are headed for ruins i tell you, you bloggers need to oust this piece of trash like badawi was ran out of office.

Don't you realise by now that PR will be a better Govt?