Musical Prelude: Thick as a Brick 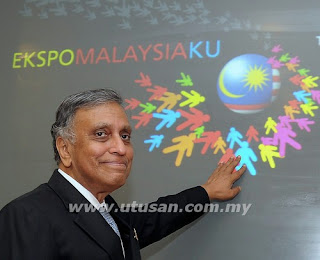 The "A Great Talent Leaves" series will take a short break. Only covered was the talented Tan Sri Nor Mohamed Yakcop's days in Bank Negara and Abrar.

In Part 1, Nor Yakcop ended his days supposedly as a knowledgeable financial man but acknowledged as only mere talent by PEMANDU and TERAJU.

However, he is not leaving. In Part 2: Continued presence, the concern expressed is his continued presence to be able to wield power at Khazanah. There is speculation that he will be the next PNB Chairman.

Part 3: Bounty to Hunt dispel views that the series have ulterior motive related to recent developments. It's not true because he has been on the "hit list" for a long time. Like a bounty hunter, we never give-up.

It does not matter that many do not appreciate the destruction caused by Nor Yakcop. So we start the revelation on the foreign exchange loss and Abrar to enable others to understand the psyche of this dangerously reckless man who has turned from gentleman to a conniving man.

Part 4: Rogue trader talks about his humongous loss trading in currency and the negligent and reckless attitude, not to mention breaking the law and ignoring rules. He continued the same trait at Abrar.

In Part 5: Forgiven sins covers his indiscretion at Abrar. It seems he is forgiven. Was he forgiven because he helped solve financial crisis of 1998/99?

If so, is his consultancy worth RM16 billion and contribution means closing one eye over CBT, breach of statutory and fiduciary duties, mismanagement of public fund, given positions, accolades, and continuing his recklessness?

Is it worthy when those suggestions he gave on Selective Capital Control were not his ideas but that of a local University professor and believed to be modeled along China? Which experienced trader do not know of the Chile experience?

Still to discuss is his days as Special Adviser, then as Minister and those many strange deals.

Already, the comments for the series are sliding. It could mean readers are bored or the point has got through already or something else.

Before writing this series, we were discouraged by few people. However, we refuse to budge because this is about the truth and being righteous.

If this is what it takes to convince others and those in high places that Nor Yakcop is not supposed to have anything to do with government any more, so be it. He has been more destructive than his so-called contribution and he should be in prison for his wrongdoing

That is why we are willing to be that lone voice as Another Brick in the Wall to struggle for the values we believe in. It does not matter what others' think and feel. Nor does it matter should others follow or not.

We are not as easily compromised. At this stage in life, our only fear is to Allah. Hopefully when we die, our grave is not piss upon for keeping quiet.

This is not just another brick but a thick one:


Thick as a Brick

Really don't mind if you sit this one out.

And the love that I feel is so far away:
I'm a bad dream that I just had today --
and you shake your head and
say it's a shame.

Spin me back down the years and the days of my youth.
Draw the lace and black curtains and shut out the whole truth.
Spin me down the long ages: let them sing the song.

See there! A son is born -- and we pronounce him fit to fight.
There are black-heads on his shoulders, and he pees himself in the night.
We'll make a man of him
put him to trade
teach him
to play Monopoly and
to sing in the rain.

The Poet and the painter casting shadows on the water --
as the sun plays on the infantry returning from the sea.
The do-er and the thinker: no allowance for the other --
as the failing light illuminates the mercenary's creed.
The home fire burning: the kettle almost boiling --
but the master of the house is far away.
The horses stamping -- their warm breath clouding
in the sharp and frosty morning of the day.
And the poet lifts his pen while the soldier sheaths his sword.

And the youngest of the family is moving with authority.
Building castles by the sea, he dares the tardy tide to wash them all aside.

The cattle quietly grazing at the grass down by the river
where the swelling mountain water moves onward to the sea:
the builder of the castles renews the age-old purpose
and contemplates the milking girl whose offer is his need.
The young men of the household have
all gone into service and
are not to be expected for a year.
The innocent young master -- thoughts moving ever faster --
has formed the plan to change the man he seems.
And the poet sheaths his pen while the soldier lifts his sword.

And the oldest of the family is moving with authority.
Coming from across the sea, he challenges the son who puts him to the run.

What do you do when
the old man's gone -- do you want to be him? And
your real self sings the song.
Do you want to free him?
No one to help you get up steam --
and the whirlpool turns you `way off-beam.

LATER.
I've come down from the upper class to mend your rotten ways.
My father was a man-of-power whom everyone obeyed.
So come on all you criminals!
I've got to put you straight just like I did with my old man --
twenty years too late.
Your bread and water's going cold.
Your hair is too short and neat.
I'll judge you all and make damn sure that no-one judges me.

You curl your toes in fun as you smile at everyone -- you meet the stares.
You're unaware that your doings aren't done.
And you laugh most ruthlessly as you tell us what not to be.
But how are we supposed to see where we should run?
I see you shuffle in the courtroom with
your rings upon your fingers and
your downy little sidies and
your silver-buckle shoes.
Playing at the hard case, you follow the example of the comic-paper idol
who lets you bend the rules.

So!
Come on ye childhood heroes!
Won't you rise up from the pages of your comic-books
your super crooks
and show us all the way.
Well! Make your will and testament. Won't you?
Join your local government.
We'll have Superman for president
let Robin save the day.

You put your bet on number one and it comes up every time.
The other kids have all backed down and they put you first in line.
And so you finally ask yourself just how big you are --
and take your place in a wiser world of bigger motor cars.
And you wonder who to call on.

So! Where the hell was Biggles when you needed him last Saturday?
And where were all the sportsmen who always pulled you though?
They're all resting down in Cornwall --
writing up their memoirs for a paper-back edition
of the Boy Scout Manual.

LATER.
See there! A man born -- and we pronounce him fit for peace.
There's a load lifted from his shoulders with the discovery of his disease.
We'll
take the child from him
put it to the test
teach it
to be a wise man
how to fool the rest.

QUOTE
We will be geared to the average rather than the exceptional
God is an overwhelming responsibility
we walked through the maternity ward and saw 218 babies wearing nylons
cats are on the upgrade
upgrade? Hipgrave. Oh, Mac.

LATER
In the clear white circles of morning wonder,
I take my place with the lord of the hills.
And the blue-eyed soldiers stand slightly discoloured (in neat little rows)
sporting canvas frills.
With their jock-straps pinching, they slouch to attention,
while queueing for sarnies at the office canteen.
Saying -- how's your granny and
good old Ernie: he coughed up a tenner on a premium bond win.

The legends (worded in the ancient tribal hymn) lie cradled
in the seagull's call.
And all the promises they made are ground beneath the sadist's fall.
The poet and the wise man stand behind the gun,
and signal for the crack of dawn.
Light the sun.

Let me tell you the tales of your life of
your love and the cut of the knife
the tireless oppression
the wisdom instilled
the desire to kill or be killed.
Let me sing of the losers who lie in the street as the last bus goes by.
The pavements ar empty: the gutters run red -- while the fool
toasts his god in the sky.

So come all ye young men who are building castles!
Kindly state the time of the year and join your voices in a hellish chorus.
Mark the precise nature of your fear.
Let me help you pick up your dead as the sins of the father are fed
with
the blood of the fools and
the thoughts of the wise and
from the pan under your bed.
Let me make you a present of song as
the wise man breaks wind and is gone while
the fool with the hour-glass is cooking his goose and
the nursery rhyme winds along.

So! Come all ye young men who are building castles!
Kindly state the time of the year and join your voices in a hellish chorus.
Mark the precise nature of your fear.
See! The summer lightning casts its bolts upon you
and the hour of judgement draweth near.
Would you be
the fool stood in his suit of armour or
the wiser man who rushes clear.
So! Come on ye childhood heroes!
Won't your rise up from the pages of your comic-books
your super-crooks and
show us all the way.
Well! Make your will and testament.
Won't you? Join your local government.
We'll have Superman for president
let Robin save the day.
So! Where the hell was Biggles when you needed him last Saturday?
And where were all the sportsmen who always pulled you through?
They're all resting down in Cornwall -- writing up their memoirs
for a paper-back edition of the Boy Scout Manual.

OF COURSE
So you ride yourselves over the fields and
you make all your animal deals and
your wise men don't know how it feels to be thick as a brick.

Bro.
You are not alone.Just to let you know that Wan Hasni ABRA will followup with Police and AG on the police report.

Meanwhile Tan Sri Halim Saad will initiate another action against all the board members of UE for fraud.Let see if Azman Yahya dan Wahid Omar can sleep well.
Surely they will run to Nor Yaakup for cover.

Khazanah and NorbYaakop are having problem to reply to Halim suit because they dint have documents with them.

I may not agree with some of your views in the past, do cheer some of it, but we both love the same music. Guess we are from the same generation.

Kucing Kurap Aint Got No Clout!

Can Only Meow Instead of Roar at The Link Man.

He's Protected and All of UMNO Knows that Except for our Dear Kucing Kurap.

We were the group that "discouraged" you from this expose.

NMY is no small potato and trying to attack him is akin to attacking the entire system.

Not easy to succeed, that's the point. Not to "discourage" but to make u understand that there are some bricks out there that are very very large. Attacking NMY is the same as attacking UMNO.

The point is, you need allies in the real world, not limited to the blogosphere.

But as Kamal says, its all down to what Halim Saad will do.

Bro.UMNO is rotten to its core!