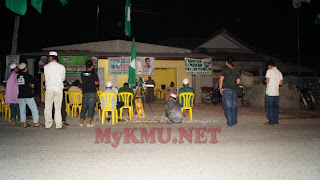 As usual, UMNO's campaign is boring, predictable and tame.

UMNO's pre-election psywar was on the right note when they managed to get PAS to appoint Dato Husam Musa as Election Director for PAS. By doing so, it brings out the local rivalry of being a Kelantanist district inside Terengganu.

Then, they slowed the pace down. Hardly much flag, no posters till last few days, and not much ceramah.With Ramadan and local constituency is mostly farmers and fisherman, who would like to stay after Terawih prayers for a ceramah?

PAS played it slow too. After all, there is hardly much local issues to play on for PAS.

So they end up cooking up false allegations and using national level issues. The issues played up was so boring that there was back and forth over family support. 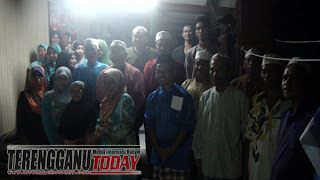 BN's Tengku Zaihan whose got a large family held a family gathering in which there was a pledge of support from the family.

PAS quickly rebutted by forwarding an SMS purportedly of some family members pledge to support PAS candidate Che Long. At the same time, PAS had some old timers to remind that Tengku Zaihan's grandfather was a PAS man.

Before going further, PAS claimed that Che Long was an UMNO member that left to join PAS. The reply to that Che Long was accused as an ungrateful Malay. He benefited from UMNO and move on to PAS to secure logging contracts from or for Husam. From there, it was said the relationship flourish economically.

The answer to the PAS membership of Tengku Zaihan's grandfather was that his father is a dedicated  UMNO activist. At the same time, videos came out of former PAS members praising UMNO. Even UMNO can't resist to overused the old ploy and claimed 500 PAS members jump over to UMNO.

Che Long story has another twist too. There is a claim that his grandfather was the man who set-up UMNO in Kuala Besut.

Subsequently, both sides had family members testifying to vote their family member or vote the opposing candidate.

That should gives a feel of how boring the campaign here in the midst of Ramadhan. Husam wanted to turn Anwar's scheduled visit to perk things up. Anwar came to Kuala Besut after supposedly returning from Makkah. Or was it only to Jeddah? 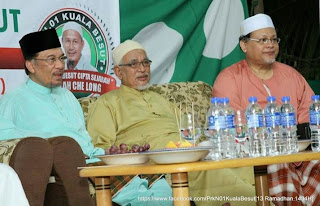 In a public show of unity, Hadi was together on stage. Imagine how uncomfortable that is for Hadi who knows that Anwar actually boycotted him and has things up his sleeve and Anwar knew Hadi is trying to block PAS entry into Terengganu.

Despite many PKR leaders are seen in public in Kuala Besut by themselves or with PAS leaders, the underlying sentiment is tense between PKR and PAS. This culminated with three PKR potential candidates for last GE filing a lawsuit for insinuating them as pil kuda distributors.

The real pil kuda distributor, Abdul Rahman Yusof or Rahman botak is not among the three. PKR's Election Director for Terengganu, Yahaya Zakaria start to give macho statement that PAS is afraid of their growing strength. Yeah ... sure.

Yahaya is Rahman botak's man. The timing of the already planned lawsuit by AMK Chef, Shamsul Iskandar is convenient. To whom? 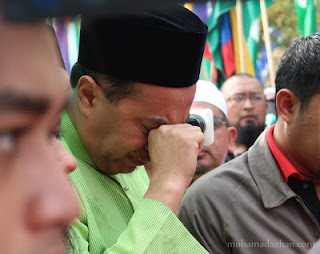 Husam is also not staying put. He is not about to let all this bother him. Winning will raise his profile amongst PAS delegates for the next Muktamar as potential PAS President. He raised the campaign a couple of notches and be damn of local sensitivities.

Surely it had liven up the rather lethargic campaign. [Read Putera Merdeka here on the slanders and The Unspinners here on Black Ops]

While UMNO is only doing personal touching, kissing babies by Wanita campaigners, and motor boys bearing gifts. There will be no ceramah, no risalah, and no hard play. Pok Yeh as they call Dato Idris Jusoh, run a tight ship. No picture get released by "his" cybertroopers without his clearance.

Kuala Besut is sensitive and aggressive campaigning will backfire, he claims. But why is it PAS can do?

They way things are of late, PAS can get away with murder. Not UMNO because there is too many apologists in the leadership. 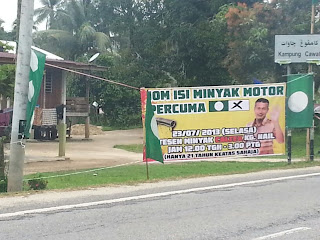 This afternoon PAS was giving away free petrol for all bikers. Corruption? No it is still acceptable and within EC regulation. Imagine if UMNO had done that like BR1M program for all.

Certainly that is a great ploy to get the youth support. Kuala Besut has a majority of 40 and below.

So far, there is no counter black out seen from UMNO side. But then again, maybe it is not necessary for poor Internet connection Kuala Besut. 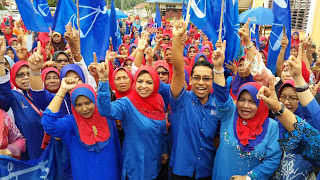 UMNO's last majority is slightly more than 2,000. One PAS blogger had predicted more than 4,000 majority based on initial poor response to PAS ceramah. There was also a prediction of more than 3,000 from a  PKR insider.

Probably it is a wee bit to much. Only a handful voters wish to return back to Kuala Besut to vote after already returning back two months ago. After voting again, they will have to return back again in two weeks time for Hari Raya.

Turnout could be lower than during GE.

Frankly, we sense political lethargy have set in from the opposition's intense campaigning and ceramah have been going on for the last 10 years.

It means a lower majority is in the offing. A source claim Husam has turned confident and claim he can win back that 2,000 votes and gain enough to edge out BN. Dato Kadir Jasin says here it is not impossible

Nevertheless, Kadir said he does not have his hands on the pulse of Kuala Besut. As far as the PAS blogger who predicted a win for BN, he saw some positive development for but acknowledged that this is Derih Jusoh territory. Not enough.

Campaign comeback hardly could make it in time to win. So we predict a BN win albeit lower majority.

I have learnt that it is not a good thing to hope that this imbecile will change. You can still see his fat wife on primetime at 8 everynight. Lets hope opposition wins so jibby will be out of office

Last GE the UMNO candidate won by some 2434 majority. There were the odd 1800 or so Chinese voters ,and some 2500 Airmen and families . for such a small victory margin I guess the votes came from the Airmen and the Malay fisherfolk /farmers but not from the Chinese. The TSUNAMI did go nation wide, to the Chinese folks of Pekan Besut too.
Lets wait and see tomorrow night

Perhaps you are talking about Besut parliamentary

Dear A.Voice,1.08am
N1, K.Besut..0.80% out of some 17,000, the slit eyes, the yellow but now dark skinned becos of South China Sea)don't use water to clean the backsides one,eat pork and bak Kut teh esp on weekends, which is friday. Trading and selling to almost 100%malay market. Speaks little or hardly any Malay but with a kind of local pasar Tgannu twang.Never try to assimilate or friendly with the locals, never bother about the country,only when it matters to their group's survival . Live to eat and to enhance their kiasuness and the Chineseness
Maybe at 1.08am yr eyes are getting slitted.
0.80% of 17713 odd voters is more than 148, but whatever maybe less than 20 voted for the Dacing