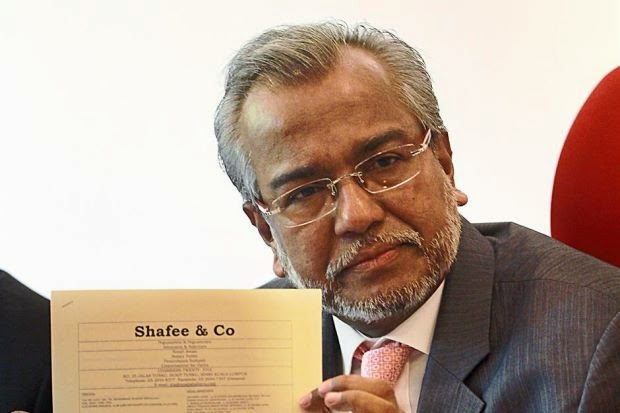 The Malaysian Insider was asked to apologise or face a defamation lawsuit of RM100 million from Fuel Sub Sdn Bhd-Datasonic consortium. They are given 48 hours to retract the report or correct an allegedly defamatory report on the bid.

Tan Sri Dr Shafee Abdullah described the proposal from Fuel Sub Sdn Bhd as a private initiative for a directly negotiated contract and it is not a public open tender for it's own reasons.

In a report by The Edge, cabinet was understood to have held back the contract award. Will MI hold back and retract?

The Malay Mail Online report on the legal demand:

Shafee & Co – which represents Fuelsubs House Sdn Bhd, Datasonic Bhd and three people – sent a letter to The Malaysian Insider’s legal firm today, urging for an immediate response out of fear that the allegedly defamatory article could cost the companies hundreds of millions of ringgit worth of losses.

The Star reported last month that Fuelsubs House sent a legal notice to The Malaysian Insider demanding an apology to be printed in major papers and RM100 million in compensation for publishing an allegedly defamatory article headlined “Umno-linked firm frontrunner bidding to manage fuel subsidies”.

Shafee’s clients reportedly said in their letter of demand that The Malaysian Insider’s July 15, 2014, article had implied that they did not possess the necessary credibility or expertise to bid for the country’s fuel subsidy rationalisation programme.

An extract from The Star Online report explains the basis for the letter of demand:


Muhammad Shafee’s clients claimed that the article by the news portal insinuated that they did not have any expertise or credibility to qualify them to bid for the national fuel subsidy rationalisation programme.

The lawyer said the news portal must give a “satisfactory response” by either retracting or correcting the article, which was published on July 15.

Should the case go to court, Muhammad Shafee said, Minister in the Prime Minister’s Department Datuk Seri Wahid Omar would be subpoenaed as a witness.

“He is very much aware of the proposal so he would be able to tell us how serious was the evaluation of it (Fuelsubs) by the Government,” added Muhammad Shafee.

Muhammad Shafee said the article, which was defamatory in nature, could also cause loss of reputation and possible loss of the contract for Fuelsubs.

In the earlier letter of demand, the legal firm demanded an unreserved apology to be published in major newspapers as well as a sum of RM100mil as compensation.

Recently, Fuelsubs announced it would pay RM10mil for a 30% stake in Datasonic Bhd, a smart-card producer, if the company secured the award to implement the fuel subsidy rationalisation programme.

The Malaysian Insider’s chief executive officer Jahabar Sadiq said in a text message: “My lawyers are handling the issue and have corresponded with Tan Sri Shafee Abdullah.”

In a report from The Edge Financial Daily as reported in the Malaysian Insider, cabinet is understood to have held back decision to award the contract. 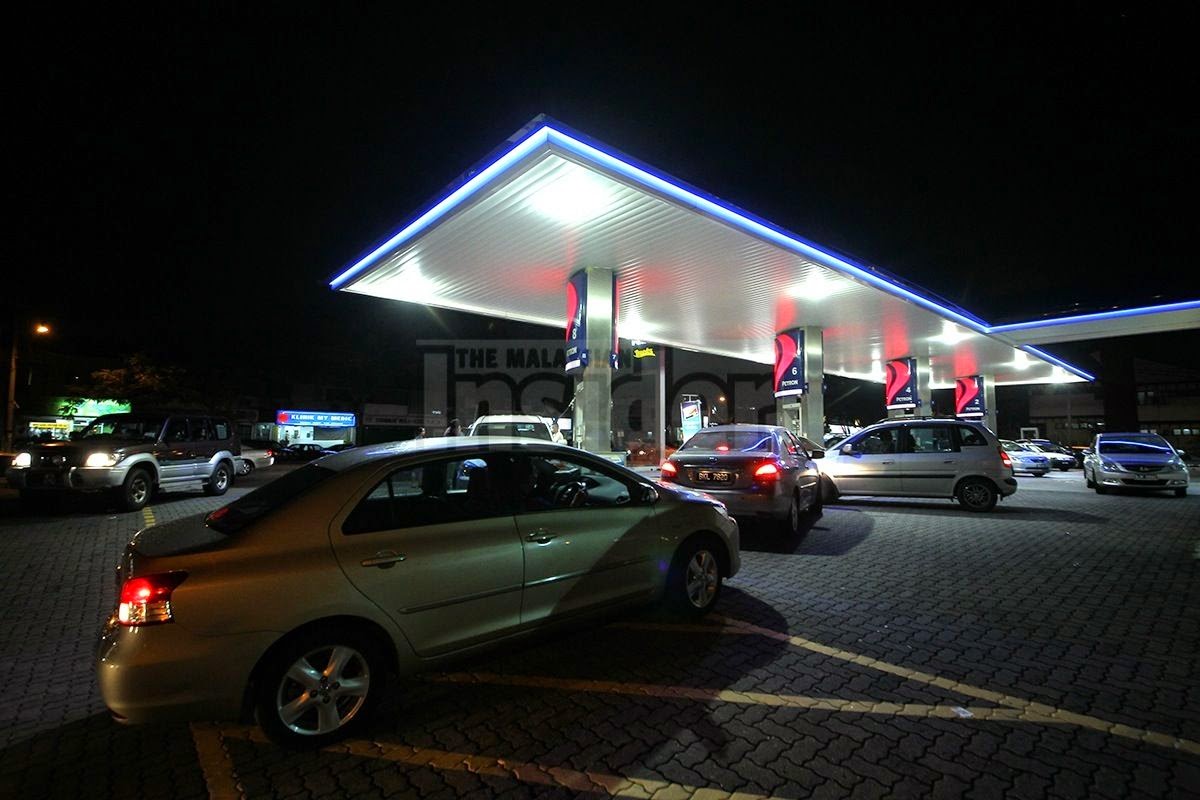 Putrajaya is understood to have held back the award of a fuel subsidy contract to Fuelsubs House Sdn Bhd as some ministers are concerned that such a move would raise questions of objectivity. – The Malaysian Insider file pic, August 19, 2014.

Putrajaya is understood to have held back the award of a contract — for the management of the proposed fuel subsidy rationalisation programme — to Fuelsubs House Sdn Bhd.

Sources familiar with the matter told The Edge Financial Daily that a Cabinet meeting chaired by Deputy Prime Minister Tan Sri Muhyiddin Yassin last week did not reach a full consensus on the award of the contract to Fuelsubs, which had been deemed the front runner for the job, as some ministers were concerned that awarding the contract via direct negotiation would raise the question of objectivity.

“This [fuel subsidy management project] is not something where there is only one specialist supplier as in defence contracts, so it was decided that in the interests of transparency and good governance, there must be a review as to how this project is awarded.

“Fuelsubs may be the best company for the job but like everyone else, it should be going through the normal channels, lest the government is accused of favouritism,” said the source.

He added that the matter will be discussed again at the next cabinet meeting after Prime Minister Datuk Seri Najib Razak returns from leave.

Minister in the Prime Minister’s Department Datuk Paul Low, whose portfolio covers transparency, good governance and anti-corruption measures, is understood to be among those who raised alarm bells over how the fuel subsidy management project was initially meant to be awarded, and on this had previously advised Najib that Putrajaya could do without the adverse scrutiny.

The fuel subsidy rationalisation scheme entails the implementation of a selective fuel subsidy programme targeting the lower-income groups, which privately-held Fuelsubs had been touted to be the front runner for the project for some time.

Indeed, Bursa Malaysia-listed Datasonic Group Bhd had in June entered into an agreement to acquire as much as a 30% stake in Fuelsubs for RM10 million, should the latter bag the fuel subsidy management contract. Tan Sri Syed Mokhtar Al-Bukhary’s Pos Malaysia Bhd is also understood to have formed a joint venture with Datasonic and Fuelsubs for the project.

Datasonic has its mainstay in the production of smart cards, while Pos Malaysia operates 730 post offices in the country.

There were known to be other parties that had expressed interest in the fuel subsidy management project. Some of the names bandied about include Iris Corp Bhd, MyEG Services Bhd, and MOL AccessPortal Sdn Bhd to name a few. MyEG, however, is understood to have backed out of the race for the project. Another relatively big name that was touted to have expressed interest is Dialog Group Bhd, but it is not clear if the company had made any inroads to bag the contract.

Fuelsubs which was registered in November 2013 is about 70% controlled by Habibul Rahman Kadir Shah, and almost 25% by Datuk Razali Merican Naina Merican while some 5% of the company is controlled by Zaid Kedershah.

Reports have it that Habibul is closely linked to Umno, the lead member of the ruling Barisan Nasional coalition. He also sits on the boards of Group Lotus plc, a unit of national carmaker Proton Holdings Bhd which in turn is controlled by Syed Mokhtar’s DRB-Hicom Bhd, Twin River Technologies Holdings Inc — which is controlled by Felda Global Ventures Holdings Bhd — and was earlier this year appointed to the board of Petronas Energy Trading Ltd, a unit of national oil firm Petroleum National Bhd.

Razali, meanwhile, is the brother of politician Datuk Seri Reezal Merican Naina Merican who is the Member of Parliament for Kepala Batas in Penang. In January this year Reezal was appointed chairman of Amanah Raya Bhd, a unit of state controlled unit trust outfit Permodalan Nasional Bhd.

The fuel subsidy rationalisation programme is imperative as Putrajaya spent a total of RM28.9 billion on fuel subsidies in 2013. A year ago in 2012 the tab was RM27.9 billion.

Reports of Fuelsubs likely winning the fuel subsidy management contract have spurred the share prices of Pos Malaysia and Datasonic.

From mid-May this year to end July, Pos Malaysia’s share price had gained about 22% or almost RM1 to hit a high of RM5.46, in response to news of the company forming a venture with Datasonic and Fuelsubs for the project. The stock closed at RM5.19 yesterday, slipping one sen.

Datasonic, meanwhile, saw its share price gain some 100% from January this year to close at RM1.99 yesterday. The stock had even hit a high of RM2.41 in March on speculation of the firm likely winning the contract. – The Edge Financial Daily, August 19, 2014.

In the Utusan Malaysia report, there will be a certain blogger implicated:

This involved individuals, thus no necessity to implicate UMNO. If Theresa Kok, Lim Guan Eng, Dato Danny Tan etc are involved in a certain corporate or business deal, does it mean DAP is involved? 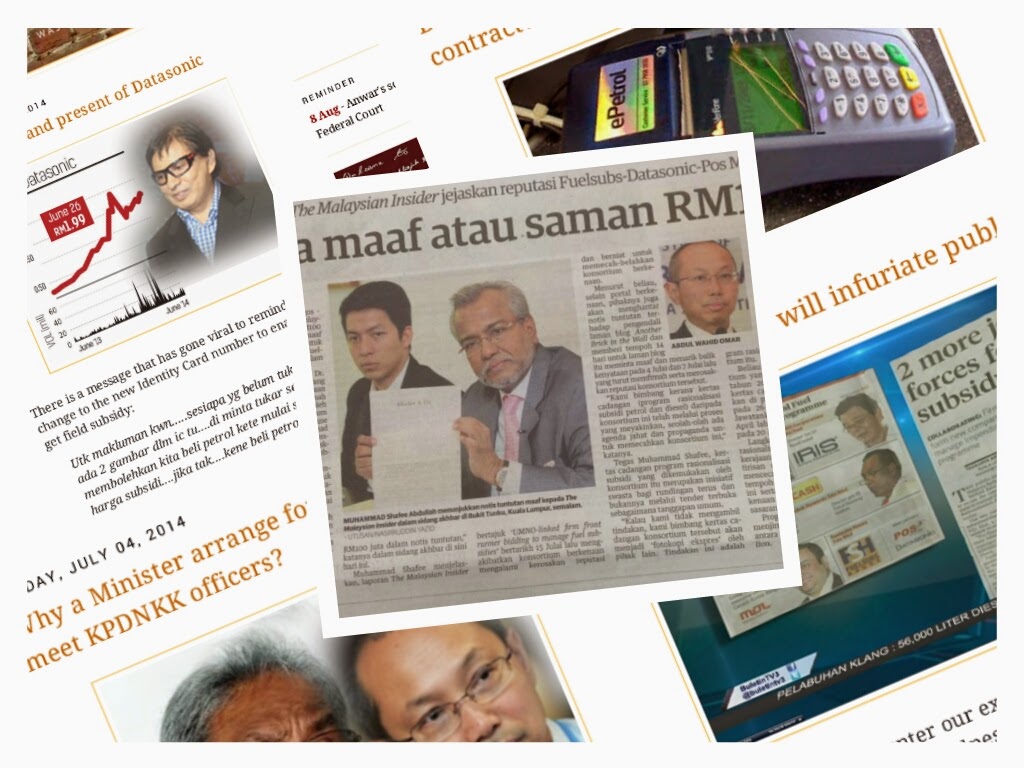 This blog had written much on fuel leakage and fuel card.

The intention was to send a message that government should be very cautious and not pre-determined a decision to rationalise fuel subsidy that badly affect cost of living for the rakyat.

Already they are worried with the badly explained GST coming.

Do not impliment the subsidy rationalisation when there are multibillion leakages of subsidies in the system.

By including to refuse foreigners' access to subsidy, the amount recouped could almost cover the fuel subsidy for the rakyat.

Some of them are linked to politicians from the ruling parties and it will make the rakyat despise government more.

So much for our good intention.