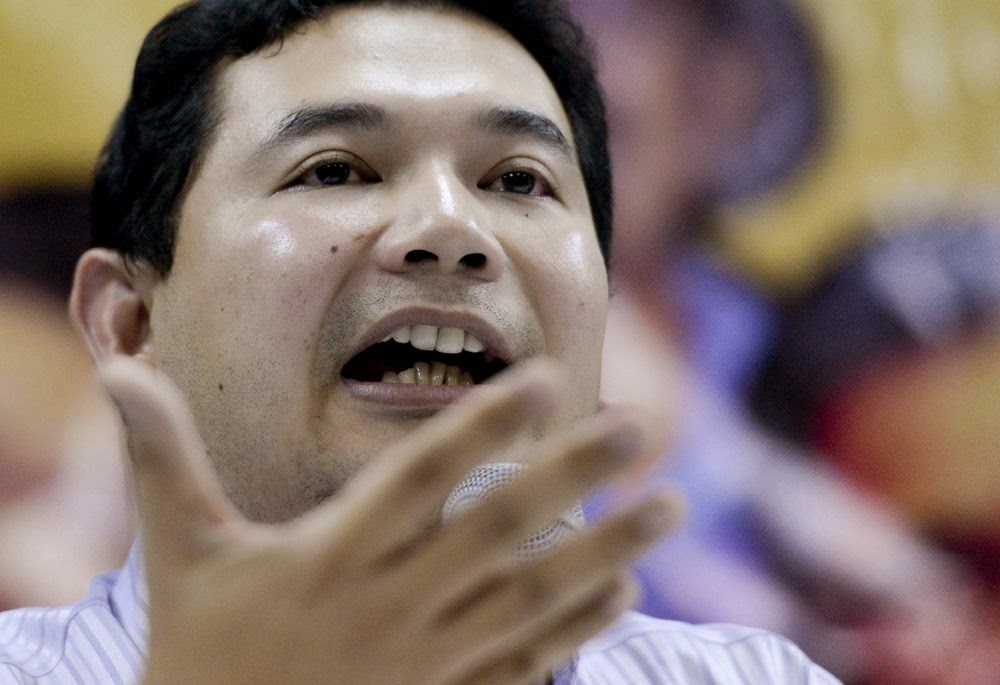 In our posting, Khalid sold 1,172 acres land for kickback? , the controversial Tropicana land deal was raised. It was mentioned that it was a deal to pay off Tan Sri Khalid's RM67 million loan to Bank Islam.

And, this blog did mentioned the possibility that the Bank may have erred when they force sold his shares. In the past, Bank tend to lose when clients raise this as an issue. Our sources with a former Bank Islam top official said the Bank would not have won at the Federal court thus they seek settlement.

Thanks to a tip from an ex-Malaysian Insider, it was found out that the settlement is about RM7 million.

Subsequently, the second posting, Royal touch to the Tropicana land deal? wrote of the Chinese business community got wind of the deal and was so upset that it cost DAP the Telok Intan seat.

Were they upset with Khalid or DAP?

Back then, the understanding was the Chinese business community were upset with Khalid and used their influence to teach DAP a lesson.

However, a certain message had gone viral recently to link the Ivory Properties-Tropicana deal with Tropicana-Eco World deal. There is a possibility that the Chinese business community was upset with DAP and taught DAP a lesson because it was DAP that was involved in the deal.

And, Dato Seri Anwar Ibrahim was recently implicated too.

In the past postings, it was mentioned that Khalid got upset when he found out that Eco World had bought the sold Tropicana deal for a premium. It had been long spoke off among property developers in Selangor that Eco World is Khalid's favourite developer.

However, to say Khalid had Tan Sri Rashid Manap personally paid for his Bank Islam loan, it does not made sense.

It shows those making such accusation does not know Rashid Manap. Over a private open house recently, it was told by a former partner that he is "kedekut" and such money would not have come through him. He would probably kept the money.

Talking at the Chinese Assembly Hall, Rafizi Ramli, the bomb-out wunderboy strategist and MP for Pandan made allegations against Khalid.

Extract from The Malaysian Insider's news report below:


He said their suspicions were confirmed two weeks after the Kajang Move was announced, with the Federal Court announcing that both Khalid and Bank Islam had agreed to settle the debt out of court.

Rafizi said this was immediately followed by a “lopsided deal” signed between the state government and Putrajaya on the water restructuring deal, as well as hundreds of acres of land sold to Rashid’s firm, Ecoworld.

“On March 25 2014, Khalid signed a memorandum with Ecoworld and it was announced that the project to build 2400 affordable flats, a project worth RM591 million, was also awarded to Ecoworld.

“On March 31 2014, Bank Islam and Khalid announced officially that the two parties had agreed to not continue legal action because of the out-of-court settlement,” said Rafizi.

“If you are in our position, what would you have done? It was very clear that this was a serious case of integrity and transparency.”

He said Khalid’s explanations to Pakatan leaders over the settlement had left them unsatisfied, and they believed he had been negotiating the deal for months.

On why PKR did not reveal all this when they announced the "Kajang Move", Rafizi said it was unfair for Khalid as they had no documented proof of the deal until now.

Rafizi basically applied a chronology of event to give an impression that it was related. The common folks could believe but it is still speculative and spurious. What more when Khalid could afford to pay or borrow to pay the RM7 million settlement.

If one were to apply Rafizi's chronology-of-event method or more comparing the sequence of event, then one can see the Tropicana deal is not linked to Khalid, it is logical that it is more of a DAP deal then a Khalid deal.

In March 2012, Dato Danny Tan had Dijaya entered into a deal to buy over into Ivory Properties project Bayan Mutiara. An extract from The Mole below:


In the past few weeks, the DAP secretary-general has been accused of letting Penang fall under the control of mafia developers who are brazenly plundering the last of the green lungs on the island and snapping up every available plot of land.

On top of that, he has also been bombarded with never ending questions about the RM1.07 billion Bayan Mutiara land deal, which is fast turning into a major headache for the DAP similar to what the Penang Global City Centre (PGCC) project was for the Koh Tsu Koon administration.

Lim has been given various ultimatums to clarify queries on the controversial sale of the state-owned land to Ivory Properties Group Bhd (IPGB), including questions about affordable housing and the status of a mosque which was supposed to be built in the area.

A blogger has now posed another pertinent question on how the state government has allowed IPGB – which was the successful bidder for the Bayan Mutiara project – to end up becoming a minority shareholder in Tropicana Ivory Sdn Bhd (TISB).

The detail will not be republish but do read The Mole here and Khoo Kay Peng's Straight Talk here.

Khoo should cut the crap on UMNO this and UMNO that. Shallow ... because it is just the greed of two corporate player brothers. Today, they play on both sides of the political divide. 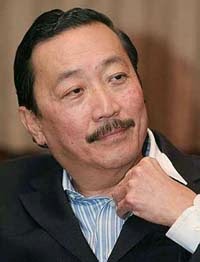 The deal is basically Danny and Vincent buying out Ivory's stake in a business in which they got the land for cheap and it is merely a mechanism to realise some "cash".

One former Ivory official suspect it is merely a pay off to DAP for their 2013 election political fund. The money could have come through Tropicana or Ivory or more probably a conduit like some personally named shareholders.

An extract of the message that had gone viral in the blog The Unspinners below:

Vincent Tan is also involved in the multi-billion redeveloping of the Penang Turf Club.

So, other than a common big-time property developer,why is DAP so concerned with removing Khalid as Selangor MB?


The deal opened the door for the brothers to enter into the DAP Corridor of Power.

Being seasoned players, they were able to do the same mechanism for DAP albeit faster than Ivory. In this case, the mechanism is less complicated but straight forward out right purchase by Eco World.

But the chronology is the same.

One party close to DAP gets the land for cheap. Then do something to the land to secure approval or change the approval to increase the land value. Then "sell" it, part or whole, to realise some profit and pass the proceed to DAP.

For Tropicana, they only paid some RM50 million and got paid RM470 million from Eco World in less than a year. Drinks all around if there is no political payoff.

The exco member in charge of investment in Selangor in the last term was senior exco Teresa Kok.

She had set out to bring in investment from China to Selangor. However, she was not been successful. The China Chinese view DAP similar to Singapore's PAP, as yellow banana, yellow outside but white inside.

FDI into Selangor last year was only RM1 billion. Far short from the targetted RM10 billion. Teresa and Khalid pales in comparison to even Terengganu's then MB, Dato Md Said who was able to bring in RM16 billion.

There is the likelihood that the Tan brothers used their Penang connection to get introduced to their faction member, Teresa Kok. It will not be a surprise that DAP needs the money to fund their Impian Sarawak project and pre-election psywar before the next Sarawak state election in 2015 or 16. 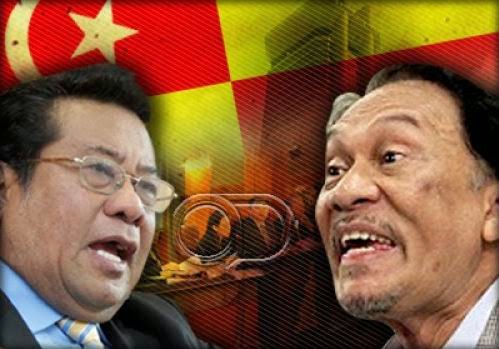 It is not believable for Khalid to not involve in the approval process as he is in charge of land matters. If it was Teresa's initiative, Khalid may have approve it when it was tabled at the exco meeting.

One rumour that reached us is that it was an Economic Adviser that instructed Permodalan Negeri Selangor Berhad (PNSB) to give the power of attorney to Tropicana to sell the land to Eco World for the money.

Another drink around the house should Anwar does not take a bite at the money. Anwar and Vincent Tan goes way back. He may have used Vincent Tan's name to attack Tun Dr Mahathir or UMNO leaders but that is just Wayang Tinggi Production.

The most important observation of all is why didn't Rafizi or Saifuddin Nasution raise issue with the Tropicana deal to implicate Khalid's so-called RM67 million Bank Islam loan?

But instead, they implicate Eco World.

For a company whose personnel was involved in the successful Battersea project in London involving the consortium of SP Setia, Sime Darby and EPF, they do not need to do shady deals with kickbacks.

It is more likely to be the brothers.

This is all merely logical deduction and piecing jigsaw puzzles of information. The honours falls upon Khalid to bare all should he want to clean his name.
at 8/20/2014 02:28:00 PM

This is a typical umno way of doing a business dealing. Same players, same method but different political parties involved.

Yeah,yeah UMNO again... But the beneficiary always the Chinkies? Dont you think so?

u gud analysis wont reach the target audience...since their english is poor..

now pkr has to resort to fitnahing themselves by distributing false document to regain simpati from rakyat who are more than fed up with pkr circus.