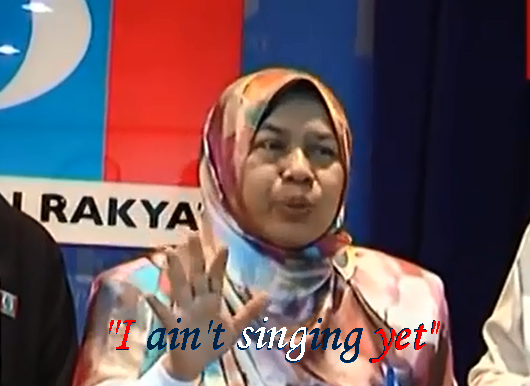 In a decision said to be 10 for and 27 against supporting the President's position, PAS did a U-turn from support to withdraw support for Khalid. Faekah Hussein should start singing for Khalid but she is only feisty but not fat.

In a seemingly defiant act against their elders, PAS's CC suggested for Datin Seri Wan Azizah and also Azmin Ali. PAS can find some fat Muslimah to sing for PAS's game is over for now.

The ball have been lobbed back to PKR's court.

PAS's Anwarinas basically succumbed to Anwar's insistence to suggest Wan Azizah. But, whether it is their own initiative or Anwar's insistence, they suggested Azmin Ali too. For the past two days, Azmin and Dr Idris's name surfaced on the social media.

Wan Azizah's name could be suggested but she is not likely to make the cut. She is not a capable administrator and failed as a Opposition Leader in Parliament.

Furthermore, it is morally unsustainable to support her when Anwar used to blame UMNO of practising nepotism. She will only be a puppet carrying out her husband's instructions from inside Sungai Buloh Prison.

As for Azmin, it is an open secret that he will not get the royal consent.

One reason speculated is that like Wan Azizah, Azmin is not Selangor born or Anak Jati Selangor. Both are born in Singapore and there is a tradition that past Sultan only appointed Selangor-born Menteri Besar.

Some may argue that Azmin's parents are Selangorians but Azmin's questionable personal life could be a factor. And, Azmin's anti-monarchy stance will be a risk no royals will take.

Khalid seemed to have thrown the towel and there is no likelihood for the State Assembly to convene an emergency session. His statement below:

He does not sound defiant, but the corporate player in him is sticking by the rule of law to keep fighting. Actually, he was merely setting the ball for his royal highness to make his position known.

According to the state constitution, his royal highness could request for three suggestions. Failing which, Sultan could insist on keeping lame duck Menteri Besar Khalid to remain. Khalid expressed his willingness to remain.

PKR may try to play games but the Sultan will insist on the three names and it is his royal highness's constitutional power to choose.

In the meanwhile, the investigation on PKR by Khalid to the Registrar of Societies will commence [read here].

At the same time, there are complains against Azmin for breaching election rules. If Azmin's name is suggested, it will cause further split in PKR. Xavier exploded when he found out fat lady Zuraidah tried to slip Azmin's name in a press statement [Read and see the video in the blog Angin Perubahan here.]

MACC is still investigating on the allegations made by Rafizi Ramli and Saifuddin Nasution againt Khalid [read here].

By the way, our postings on the Tropicana land deal was only part of the story. The remaining part is only coming out soon. Then one will understand why after a long silence Lim Guan Eng was visibly panicking.

This deal must have been under the radar of MACC for quite a while. If it had came out in this blog, we believe it is on anyone or any organisations of relevence's radar screen. Thus, do not be surprise that the result will come out soon.

Then, Khalid could only be expected to legally clean his name. It was to PKR's disadvantage for not giving Khalid a fair hearing to explain.

For PAS, the implication of their decision could lead to two possibilities. One, it could further split the party and most people expect this to happen.

The second possibility and a rather remote one is that today's development was merely a Wayang Tinggi Production. The suggestion for Wan Azizah and Azmin was merely to preserve Pakatan Rakyat and weaken PKR.

DAP will oppose Azmin and it is an open secret that they want someone malleable to obey their requests. They are behind the move to gather public support to return power to the people and take away Sultan's disgression in the selection of Menteri Besar.

Who says championing human rights must deny someone like Khalid his "human rights" for a fair hearing?

Human rights is about freedom of speech, freedom of expression, free media, and right to assemble. And, surely human rights is not the rights to to the sexual practise of lesbian, gay, bisexualism and transexualism. That is not human but acts of hedonism.

But that is our personal view.

As far as Khalid, his options is getting limited and his back is being pushed to the wall. It ain't over till the fat lady sings and not sure which one is the fat lady.

But, bear in mind that Khalid still want to clean his name and fight against his unfair expulsion before he step out of politics for good.
at 8/17/2014 06:05:00 PM

Actually we as anak jati Selangor have enough of pendatang cari makan in Selangor be it Malaysian or foreigner.
Who the hell do you think you are to dictate us Anak Jati Selangor.
GET THE HELL OUT OF SELANGOR IF YOU ARE NOT HAPPY WITH OUR SULTAN DECISION.

If azmin become the MB, hmmmm .. if he can surrender his ministry of home affairs, he can also surrender the whole state of Selangor. Ada kami kisah? Kami orang Kelantan, untouchable!

Fat lady could be once petite Hannah Yeoh :)