Send out the clown 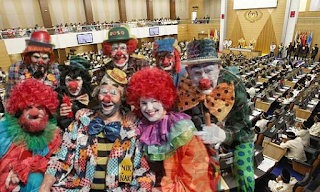 Aspan Alias blog posting was given coverage by FMT here in September and his quote "Send out the clown" was used as title. An apt title for this posting too on MPs behaviour in Parliament and the circus surrounding their attempt to do a vote of no confidence.

The questions our friend posed sounded strange. He loves to clown around but his views, though usually lacking in details and heavily rhetorical, are serious concern. However, it is laughable that this Tengku Razaleigh fanatic, but disguised as DAP member, showed concern for Dato Najib and BN.

As far as sending out the clown, there are lots of them, especially his DAP and PKR friends in Parliament.

It has been quite a while since we went to Parliament or followed the Parliament closely on the tally. At one time, we would stay tune on PAS blogs carrying the proceeding live whenever online at home. It is usually a bore cause the really good debate or exchanges are far in between.

Our MPs including the BN MPs does not have the ability to debate well.

Most of their arguments are shallow in content, tend to be simplistic observation and raising insignificant points. Some tend to speak as though they are at a political rally. PAS MPs talked as  preachers as though there are no other races and followers of other religions listening.

There is this tendency to seize issues that could be politicised than of public concern. Debaters use the platform to pick on the other side than being serious in their delivery.

It's far cry from the depth and precision, holistic thinking and wits of MPs in Parliaments of western countries or Senators and Congressman in the US. Our MPs tend to be emotional and seriously lack the decorum in actions and words.

Somehow or rather, much of the time our MPs bicker at length and on top of their voices over formality, procedures and "peraturan mesyuarat". One would have thought that they would have been conversant on the procedures after all these years.

Our interest to follow Parliament proceeding this time around is only due to the hype for the vote of no confidence against Najib. After staying home and following the proceedings on Hypp TV channel 413 since Monday, the situation is still the same.

Except for a handful of MPs, notably MP for Kelana Jaya yesterday during the debate on the current haze, most MPs hardly showed any finesse. With the live coverage, do they not realise the country is watching their antics.

Before Parliament started on Monday 19th, it was revealed that a private motion was introduced by PKR's MP for PJ Selatan, Hee Loy Sian had put a vote of no confidence motion. It came as the 25th motion. 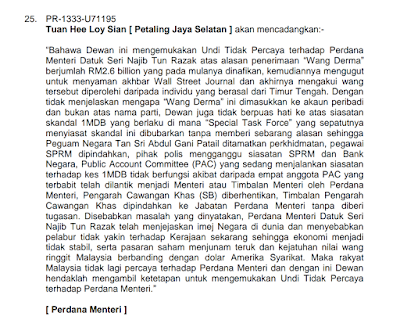 Since this Parliamentary seating being a Budget 2016, other governmental matters will take precedence. As Dato Azalina Said explained:

There have been many ensuing event since Monday that was laughable. The intend to dramatise the Parliament was obvious but instead of good acting, they were looking like clowns and novice.

One WA message forwarded to us was a hilarious one:


Malaysia probably has one of the most incompetent bunch of opposition politicians in the world.

Firstly, PKR MP Hee Loy Sian submits a "vote of no confidence" ahead of time to the Speaker and it gets accepted but queued at the back.

But then the Dear Tokong complains that and scolds Hee Loy Sian and PKR  while accusing PKR of "main guli" since Tokong says such an important motion should be submitted by the Opposition leader, Wan Azizah and not just by anybody.

This then starts a war of words between PKR VP Tian Chua, Tokong and DAP.

After some arguments, finally, YB Hee relents and withdraws his "no confidence motion" with PKR president Wan Azizah saying she will resubmit the motion herself. 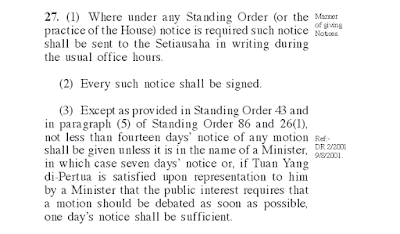 However the problem is that under parliament rules, any motion has to be submitted 14 days prior to the current sitting and will likely be rejected!! 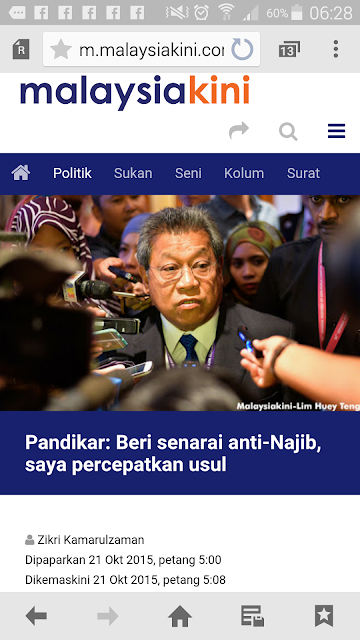 But to give chance to them, Parliament Speaker Pandikar then ask Wan Azizah to submit the list of MPs who will support this motion to prove they have enough members so that the Speaker can use his discretion to accept the motion if it is urgent and has enough support. 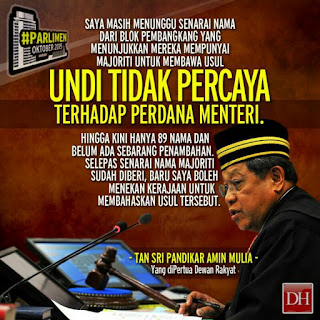 And even this, the lame Pakatan Harapan could not even come out with this list to give to Pandikar. 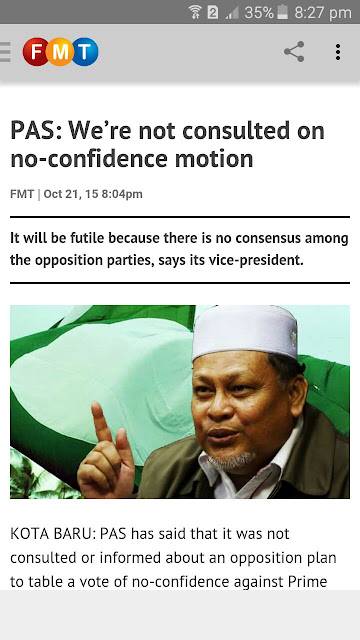 To make it worse, PAS vice-president, Mohd Amar Nik Abdullah just came out to say that PAS was not consulted or informed about this no-confidence plan and hence this vote will unlikely to succeed since there is no consensus among the opposition parties.

WTF!! You depend on PAS votes in this motion and you don't even inform or consult them before-hand?? 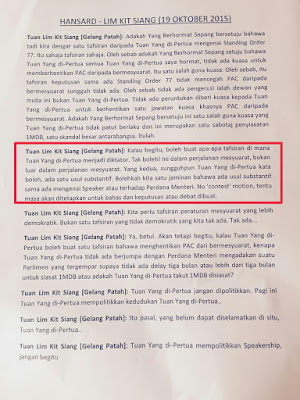 And in-between all this, Lim Kit Siang got into a heated argument with the speaker and making all sorts of allegations against him. 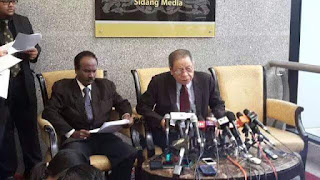 Insulting and defaming the speaker is clearly against the rules but Pandikar again gives chance to Lim Kit Siang to apologize or face suspension. 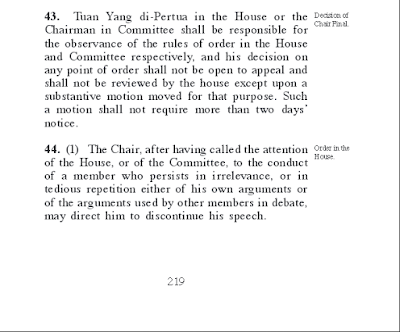 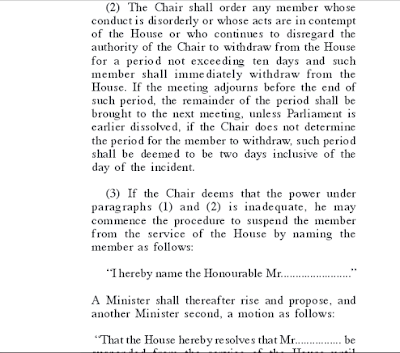 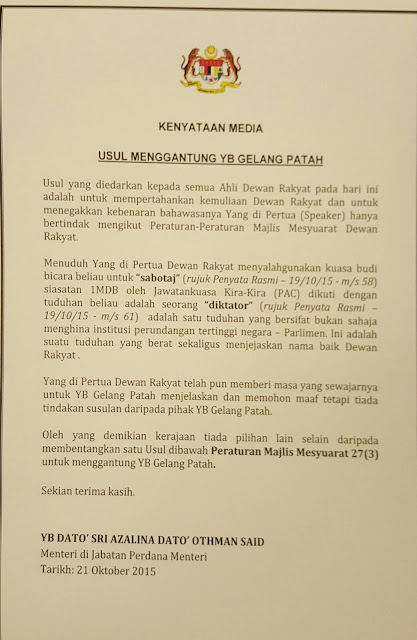 However, Uncle Lim somehow disappeared from the Parliament during the time allocated to apologize and now faces a 6 months suspension - hence ensuring one less vote for their motion of no-confidence and further reducing their chance for success.

And Pakatan people have had their big BERSIH rally to prepare for this no-confidence motion and even printed 20,000 post-cards for it - only for them to screw it up themselves.

No wonder that even BERSIH came out to slam Pakatan Harapan and essentially saying they are incompetent and "main guli".

Ridiculously funny people. No wonder in 2013, the late Lee Kuan Yew condemned these Pakatan people as bound to fail. LOL!

This is the interesting part.

So it has to be serious and if they have 112 votes, what is there to worry asked one blogger turned FBer, RBF?

There are only 88 opposition MPs including PAS and Tan Sri Khalid Ibrahim but how come there are 89 names submitted to the Speakers. Ah huh ...interesting.

The result on the motion to suspend Gelang Patah was 107 in favour, 77 opposed, and 1 abstained. There were only 97 BN MPs present but the aye had 107.

That could only be the 10 PAS votes. Kit Siang and DAP looked at PAS as a foe so that is to be expected. Will that be the outcome of  vote of no confidence against Najib in the form of rejecting the Budget tomorrow?

All Ministers and deputies are requested to attend for the budget debate from 26th-29th October and debate on policy on November 4th. How many from BN expected to betray Najib? 4 or 14? Still not enough to reach 112.

BN votes could only reach 88 at best, but without PAS and Tan Sri Khalid Samad, opposition only have 74 votes. Who would be the 89 minus 74 = 12 votes be?

And yes, minus 1 for Kit Siang.

If the vote of no confidence in any form end up unsuccessful, as Kit Siang said at the end of his defense before the vote, it was clearly a drama to make him a matyr and join the list of names he described as victims. [See the list on the You Tube in his blog here].

It is a drama indeed:

The expected plan is to reject the budget and if it fails, next will be to ridicule Najib at the UMNO General Assembly in December. That is no way to win a general election for UMNO and BN but maybe in the name of saving UMNO as claimed by Tun Dr Mahathir, it will not be a surprise to see him go all the way.

More so it is a matter of face since he admitted as saying he has no proof:


Maybe he was kidding but when will Najib answer in full, when will Tun M show the evidences, and when will all these time wasting self destructing political drama stop?

PDRM was given the permission by Thai police to interview Xavier Justo in prison. Is there more to come in that Department? 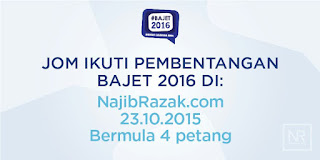 Najib is planned to explain everything on the RM2.6 billion, 1MDB and other related matters in an organised event. Will it be in Parliament tomorrow evening when he deliver the budget speech?
at 10/22/2015 05:48:00 PM

Playing the "if entertained, anyone can call no-confidence vote" is quite laughable. I see this in a few place i go to read. Coincidence or a concert?

Perhaps introduce a prerequisite item for would be MPs- a certificate of competency in articulating oneself when debating in patliament!

He will answer with evidences or just like last time.. answer the wrong question..
Question: did 700m from 1mdb fund transfers to pm personal account
Pm answered: i never used 1mdb fund for personal interest
Did he answered the question accordingly?

These opposition Pakatoons and clowns are just that - cartoonish and clowns. Their antics in and outside Parliament are boorish and uncivilised.

Anyway, back to the no-confidence vote, their so-called strategy backfired. If they had concentrated their firepower on the PM alone they might stand a chance. But they, especially the DAP, stupidly attacked the Malays and all things Malay and Islam. This strategy will ensure that they will win the hearts of the majority. They will never succeed in getting the required numbers in Parliament.

He replies in your example he never used 1mdb for personal interest its so obvious...