UMNO and PAS's struggle for ideology, survival and continuance 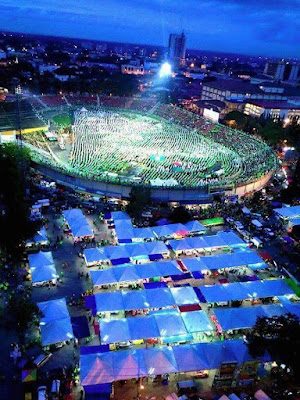 Before leaving for Kota baru to witness the Fastaqim 60K gathering by PAS, there was a discussion in our WA Group about idealogy.

It arise from a friend complaining on the likes of Dato Zaid Ibrahim and Dato Saifuddin Abdullah that move up in UMNO but left when they can't get things their way.

When in positions, they pretentiously agree to UMNO "idealism" and even abuse their positions. Eventually, they began to lose their common sense and this led him to believe UMNO idealism is dead.

However, we believe UMNO has an objective to it's existence as spelled out in Article 3 of their Constitution but does not uphold to any form of ideology. The so-called Malay nationalism has no guiding political or economic theory as guiding ideology but rely on pragmatism to bow to the wind.

Pragmatism was in-sync with the thinking of a lawyer friend. He felt that ideology does not matter, more important is implementation. In other words, the deliverable.

That discussion was timely as it puts the PAS event in Kota Baru in a different context.

There are political analysts that viewed the Fastaqim as a political show of force. By being able to gather 60,000 or as spinned by MC for the night, YB Nasruddin Hasan, 100,000, PAS is saying it is unaffected by the departure of their own Zaids and Saifuddins.

There are those that see the event as PAS begin to pound the drum of a general election to gather and motivate it's troops to ready for war. Only this time, the enemy seemed to be the dissidents that acted like "monyet yang tidak sabar tidak setia kepada perjuangan."

Other than critics on government on 1MDB by new party Ikatan President, Tan Sri Kadir Sheikh Fadzir and more subtle delivery by PAS Deputy President, Tuan Ibrahim Tuan Man, most of the speakers talked of remaining consistent, continuity and maintaining upright to PAS's Islamic ideology, at least their version as some would claim.

It highlights the importance of the Islamic ideology and spirit that PAS uphold to in re-grouping and re-energising the party.

PAS grassroot had built affection for the pragmatic leadership and the ability of the Anwarinas to deliver political results. The departure of state level and grassroot leaders to join leaders that formed PAN was indicative that pragmatism had taken precedent over ideology.

Nothing more significant than some PAS members leaving to join DAP.

Whether PAS like it or not, politics is about pragmatism. PAN has plans to run in 45 seats in Kelantan. Dato Husam Musa is acting as the new opposition to expose inner secret of PAS. He could eventually leave PAS and join PAN.

Lim Kit Siang has patronisingly told PAS not to dream of running in as many seats they wish including non Malay areas as Hadi said. He told PAS to stick within Kedah, Kelantan and Terengganu and leave the rest to Pakatan Harapan.

Who will eventually be monkey and the peanut feeder?

Within the UMNO circle, the discussion on ideology is indicative in our Whass App group as reproduced (edited) below:

It seems "ideology" in Umno is dead.

In the very first place both Zaid and Saifuddin when they joined Umno, it was never about UMNO ideology or Malay political struggle for Malay cause.

Their politics have been constantly broken. They have become the professionalized politicians and out of touch by dismissing and to dissent Umno idealism.

While they were in Umno their presented statements on political brannigan were pretentious and producing increasingly mangled political impressions so-called high-minded or rather fended for themselves.

What is clear, they are putting ideology before common sense". While the majority of Umno politicians drown with their acumen being careered politicians.

To them ideology is a dinosaur. Therefore, it is no longer relevant to current political complexity. But they forget that ideology in Umno is not dead. It is just being passive override by new supply of political culture or neoliberalism.

Malay in Umno must uphold the idealism and to stay relevant as a political party and as a Malay community of Islam as a whole.

UMNO never had an ideology. It has always been pragmatic i.e. go with the flow. They only have an objective to strive for the Malay, Islam, and country but it is in the general sense.

I think UMNO has an ideology but as with most things in Malysia, the implementation got screwed up over the years.

It needs to change i.e. to attract the better Malays to become its members. Better Malays can also mean the Malays with more gray matter, commitment, integrity n values. Getting more UMNO members is the right or better approach but many members are incapable of contributing towards the Malay and Malaysian cause thus it does not serve a purpose.

If we had an ideology on Malay and Islam position, we would not succumb to liberal ideologies attempted by Saifuddin, Zaid Ibrahim and many names sensitive to many.

If we had an ideology, we could uphold to our struggle without compromise and able to arguably defend it. Because we have no ideologue to guide, we were not able to come up with another solution to NEP.

It is not so much about implementation. No implementation could be as perfect as planned despite zero-rising leakages and mismanagement or administrative errors.

In short, we never had an ideology. This had been discussed long ago and the intellectual forums attended as far back as 80s concluded so.

Having an ideology and implementing it are two distinct and seperate things. Which manusia is infallable? Manusia in this day and age.

If Umno never had and ideology, we should have one. Underlining ideology is a system of ideas and ideals in Umno, the one which forms the basis of Malay economics or Malay political theory and policy.

I am thinking of mental revolution based on the ideology which Umno left astray and revises it for Malay CAUSE this upcoming two and the half years.

Umno has multiple ideologies by virtue of Article 3 of its constitution, then struggles and history.

Article 3 in the Umno Constitution states the party's responsibilities and objectives as a political party which upholds the Malays' national ambition to defend religion, race and country.

Along the way because of racial dynamic in politics and economics, "UMNO's ideologies" turns ideologically berserk and untraceable. But it does not mean Umno never had an ideology, I think.

So we come down to defining ideologies and the difference with party struggle i.e. objective.

These two is higher in hierarchy of planning to implementation. Obviouslt it is different and is laid out downward as guided by ideology and/or objective.

Oxford dictionary define ideology it as below:


NOUN
1 (plural ideologies) A system of ideas and ideals, especially one which forms the basis of economic or political theory and policy: eg the ideology of republicanism

SYNONYMS
1.1 The set of beliefs characteristic of a social group or individual: eg. a critique of bourgeois ideology

MASS NOUN
2 (archaic) The science of ideas; the study of their origin and nature.

2.1 (archaic) Visionary speculation, especially of an unrealistic or idealistic nature.

So we are more on the first definition 1. The proposer could be 1.1. Our lawyer friend emphasis on implementation has to do with 2.1

Not to be left out:

Now is the time Umno needs a transformative leader to uplift the Malays. We are at our lowest ebb and we are scrapping the bottom of the barrel... for the Rennaissance men!!

See how DAP develop the it's party. They can even wipe out MCA. The core struggle is survival of the Chinese community and they exploite racial issues and maintain high Chinese spirit in the struggle to take over the power of the Malays.

Besides definition of "ideology" from various faculty of thoughts, what I am trying to drive at, close to home, political ideology of Umno is attestant to Malay survival and continuance.
at 10/21/2015 05:09:00 PM