Geo-global politics behind Najib's US visit 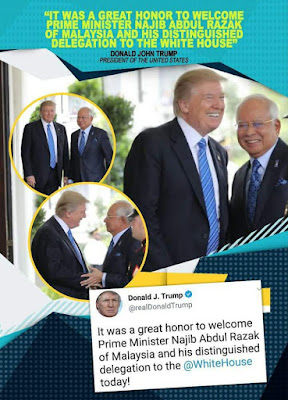 Donald Trump's tweet is just common courtesy. So does the one by Dato Najib. Hope pro-government supporters not make too much out of it.

Malaysians have a tendency to be too political, or more precisely, low level political practises that tend to be simplistic, arguing based on good soundbyte one liner, and over induging in perception play meant to appeal to common folks' logic.

Applying that thinking to international relations and geoglobal politics is plain dumb.

Off course, there are more intelligent Malaysians that look into core issues of politics - facts, figures and discourse in public policies, but then geoglobal politics is a different ball of wax. 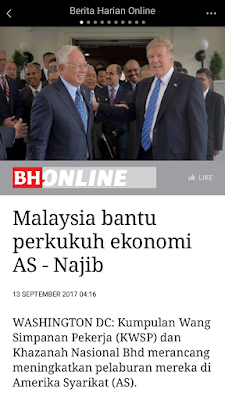 It may not be the most politically correct way of putting it but lets not suffer from simpleton thinking. Tolerate for a while and consider the strategic importance.

Bear in mind, Dato Najib is talking across the table to Donald Trump.

Naturally, his words will be known to the public, but Najib neds to appeal to a new US President who is not a politicians or far from a diplomat, but a businessman.

He has to make his message understood by the gung ho tycoon.

This trip to see a new President is about both side sizing up each other. Our side need to understand this new "most powerful man in the world".

Trump see the strategic value of Malaysia and perhaps, is concerned with China's massive investment in Malaysia.


Stop thinking like the quarrelsome Tun Dr Mahathir, who makes enemies with everyone, in Malaysia and overseas, and inconsistently U-turn on his every words and lifetime positions.

A qualification should be in order. He has friends, and very friendly with the likes of Suharto, Mugabe, Castro, Gaddafi, etc. Yes, all have similarity - draconian and cruel dictators.

His past antics had caused headache to the country. Malaysia would have been in a far better economic position had he not abused his position to allow for massive economic leakages and endless non-stop quarelling!

That is the reason during his time, Malaysia was never visited by the US President or major world leaders. And, Najib did not have to get Tan Sri Vincent Tan to pay lobbyist Jack Abram RM5 million to meet the US President.

In turn, US President and many major world leaders do not visit Malaysia. They do so during Najib's time.


Business and economic ties between people and coumtries strive on good relationship and friendship. No one do business with enemies. It is a simple logic that anyone can understand. 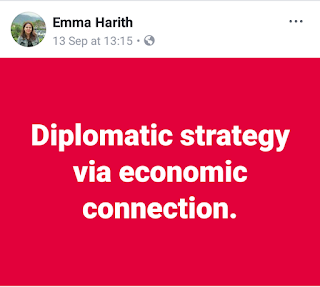 The message our side delivered is we have been friends for a long 60 years. We are appealing on a matter Trump understand very well, which is economics and business.

The economic diplomacy in play is to appeal to his slogan, "Make America great again". Those not following the US election will make simplistic assumption.

Commentators will complain and it is no less than Matthias Chang who in the private WA message he viralled around too make the remark why should we be helping the US economy when we too are struggling.

The simple explanation is this is simplistic diplomacy that could appeal Trump.

When other country invest in our country, it strengthen our economy. In turn, when we invest in the US, we strengthen their economy in a way - big or small.

The investment mentioned was the purchase of Boeing planes - new Dreamliners and 737 models and investment by EPF and Khazanah.

Since Malaysian Airlines is not a public listed company, no news was heard. Only it is known that MAS need to replenish its old airplanes. Heard the plan was Air Bus.

But, that is a business decision and one either buy from the US or Europe (for Airbus). No other way for such size airplanes.

At least, we did not do the dumb thing of buying 88 A4 Skywak in 1984 from the Arizona desert dumpster.

Investing in US is nothing new 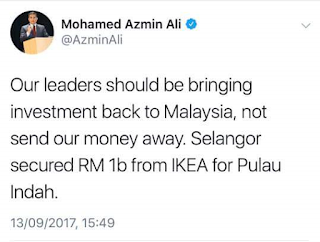 Then  the issue of EPF and Khazanah investments with mentioning of rebuilding American infrastructure.

Global diversification by EPF and various funds in Malaysia is not new. (read Syed Agil FB here). It has been much talked about in the days of Mahathir and in fact, EPF have portfolio investment in  the US for the past 25 years. Is that not Mahathir time?

As at March 2017, EPF investment portfolio is RM737.17 billion with return of RM11.79 billion. Overseas global diversification fund is 29%.

Lazy to elaborate over why the need for global diversification. It is needed to get better returns and in the case of Battersea in the UK, KWAP invested 3 billion punds and got back 3 billion. And there is the foreign gain to be calculated in.

The Malaysian investment in Battersea was RM43.78 billion.

Funds have targeted return to meet investors expectation but the local market do not have enough stocks that meet such criteria and EPF will end-up owning all the stocks, including dead cats, if it is invested only in Malaysia.

The additional investments is in sync with the increasing portfolio size. While, Khazanah is reinvesting their recouped investment in their foreign investment in Ali Baba.com. [Read LSS FB here).

With US rebuilding their infrastructure, is the related sectors not an opprtunity? These Cap Bunga commentators are really unschooled.

By the way Azmin, just cause you secured additional investment from IKEA, do not boast from a long effort by MITI. They are already here!

Perhaps, he not realise China, Saudi Arabia investment which they claimed "jual negara". Now they say "gadai negara" kepada US.

Wonder what would happen if more major cash rich countries that refused to invest during the time of Mahathr pour more money in Malaysia.

One has to accept that trade and investment at the global level is economics and geoglobal politics.

US is an important trading partner and our 3rd biggest export destination. Malaysia is their 18th biggest.

Such gesture could be useful in attracting their Fortune 500 Companies to do business and invest more in Malaysia. (Read The Malay Mail Online here.)


Trade has been in our favour but we need to manage the geoglobal politics.

Investing in the US is a diplomatic gesture. We need the US in for security and support to address current and potential international disputes.

The extremist Islamic insurgents affects both US and Malaysia. ISIS is a potential security threat for Malaysia. That was the core of our reason to support American war against terrorism.

During the trip, Malaysia highlighted our support for the US to stop trade with North Korea to Trump.

It has geo-global strategic value beyond the murder of the North Koran Leader's brother. It is South China Sea! 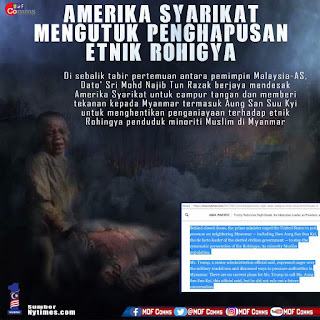 As far as Myanmar issue, contrary to Rafizi's allegation that it was not discussed, Luknman Sheriff FB here debunked him. Read NYT here.

Related to the NYT report, staying over at the Trump hotel in Washington was not at the request of Trump but as arranged by Malaysian Embassy. It is 2 block from White House, and is certainly nothing wrong. Just convenient location and good diplomatic gesture.

To debunk more of Rafizi's endless nonsensical remarks to dupe his gullible young followers. Anyway he is politically irrelevant - prison soon and rejected by PKR.

This is not a state visit as it does not involve Agong, but an official visit. It is not clever to claim it as casual visit with serious bilateral matters discussed.

It is not 30 minutes but almost the meeting was 45 minutes. It is longer with opening the pleasantaries, a one hour private meeting, and subsequent PC to read the communiques. 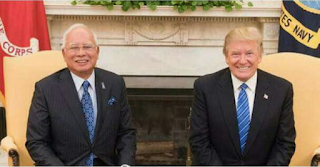 It is written in nicely worded diplomatic language not easy for the common folks to comprehend the real and core issue.

For those detractors of Najib, including Clare Brown and Soros network media that got spooked into thinking this is about resolving 1MDB, White House made it clear the visit has nothing to do with it..

It is apolitical (read NST here).

That means it is all geoglobal politics at work. So lets not bother on the tie colour comment and non existence BERSIH demonstration.

By the way, Matthias, Datin Seri Rosmah was not left behind by Trump, Najib and Melania. Stupid of you. The wives do not attend such serious official meetings.

"Malaysians have a tendency to be too political, or more precisely, low level political practises that tend to be simplistic, arguing based on one liner with good soundbytes, and over induging in perception play meant to appeal to common folks' logic."

I have noticed this tendency on WhatsApp groups, where some believe whatever is forwarded to them without further investigation as to its validity and quite often it's fake news but they believe it based on prejudice and forward it on.

After all, according to the The Digital News Report 2017 by the Reuters Institute for the Study of Journalism, Malaysia has the dubious distinction of leading the world in news access via WhatsApp.

You can download the original Reuters Institute Digital News 2017 report from here.

An I say "dubious" because many people I know or have encountered who believe something received via WhatApp or in a teh tarik session apparently do not have the means, the capability of simply do not care to do a search to verify what they have received or heard.

Like some a member forwarded a post to a WhatsApp group saying that the "Ministry of Interior Regulation" would begin monitoring all social media posts and for us to take care.

It was also circulating in India and this publication was alert to it.

The Ministry of Interior Ghana also issued a statement on its website denying that the allegation, though its website is down or unreachable right now.

So with so many Malaysians accessing their news, genuine or fake from WhatsApp, imagine what our society will be like 10 years from now.

That's why it is a dubious distinction.

Well done... in the video, Najib' body language and his tone seems humble enough... when addressing the POTUS.
I thought the plight of Rohingyas will be the main agenda on the table because that's where 'major' news make its mark around the world.

Anyway, if its going to be a sideline issue with Trump, maybe it best to ask the Chinese to help the Rohingyas instead. After-all, China as neighbor and the economic power-broker in Myanmar... with its OBOR vision and oil-pipeline... stand to loose much more than the American, if Rakhine State is unstable.. Hence, as with North Korea, China should have much clout over Myanmar than the thousand of miles away Uncle Sam. Furthermore, Najib have 'enriched' China more then the American, albeit through debt.