The passing of my favourite royalty, a true Malay gentleman 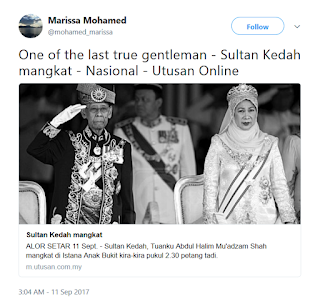 Almarhum was truly a great man.

Although there was never the opportunity to meet Almarhum in person and the impression made is from afar, there was hardly any bad rumours circulating of Almarhum in carrying out his duty as the twice Seri Paduka Baginda Yang di Pertuan Agong.

In private, we often expressed our disgust to the actions and behaviours of certain members of the royalties. However, none could be said of the late Sultan.

As expressed before in our December 13, 2011 blog posting Daulat Tuanku!, his majesty was my favourite royalty:

His Majesty ascension today should be an interesting event for the likes of my generation, who get this unique chance to experience a former Agong being ascended the second time.

Despite being a Johorean, who usually have such high regards for our Sultan, (for the time being, while we learn to endear the new Sultan, my favourite and much respected will have to be the late Sultan Iskandar), I have always had greatest of regards for his Majesty, the Sultan of Kedah.

It is not merely because of the everlasting impression as a child shaking the hands of a Sultan at the steps of the Masjid Sultan Abu Bakar after Friday prayers in one of his official visit of Johor. I grew up in the compound of the Masjid Abu Bakar, Johor Baru from 1969 till 1972.

But, much respect for his Majesty comes off from his reputation as an uncontroversial Sultan of Malaysia. No unsavory gossips or rumours is ever heard of his Majesty and the Kedah royal households but only words of respect and regards.

If there is such a thing as a humble Sultan, it has to be his Majesty. I have heard his Majesty's subjects described him as one. They complimented his Majesty for his soft spoken, humility, and concern.

Even his living quarter in the istana ground is described as a simple home.

Truly, Almarhum is a model royalty to be emulated by his fellow brothers. His last words as reported by Malaysiakini here should be remembered and heed of by us all.

Almarhum passed away at 2:30 PM yesterday, September 11th 2017 at the Istana Anak Bukit in Alor Setar. (to correct the error in yesterday's posting here). His Majesty's health has been in decline for quite a while. Though denied, there was a special prayer for Almarhum held in April (read here).

A history of Almarhum in Malaysia Digest here. According to NST here, Almarhum is the second oldest living monarch. The memory of his majesty's installation in 1958 (before we were born) in the video below:

Dato Najib was informed of his death on his way to Washington. He announced the Jalur Gemilang will be flown at half mast to pay respect to the former Agong. (read MMO here).

His Majesty will be laid to rest at the Royal Mausoleum in Alor Setar. The ceremony to commence at 11AM today. 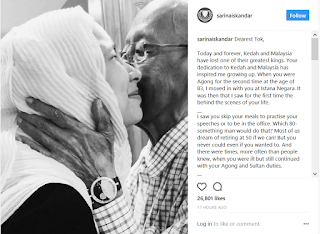 Not only, the granddaughter will miss him (read her eulogy in MMO here and BH here), but all those close to Almarhum and the rakyat, including yours truly, who appreciated him, will miss him. He too is "forever my Sultan" and genuinely a ruler with the heart for the rakyat.