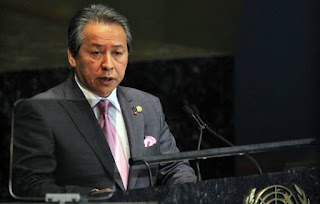 In the close door meeting at the US-Asean Dialogue after the recent 31st Asean Summit in Manila, Dato Anifah Aman told media that US President, Donald Trump said, "Najib is a good friend of mine. I have known him since I was still in the business world and before I become the US president." (Read NST here)

He praised Najib too for coordinating the dialogue and his effort on South China Sea and Rohingya crisis. A telling message to Asean that despite their attempt to refrain from addressing the Rohingya crisis, the US is with Malaysia on it.

Maybe some Malaysians fail to see the relevance of that statement due to relentless effort by opposition to discredit Malaysia's increasing prominence on the international scene and strong relationship with major nations US, EU, China and Saudi Arabia.

The lesson learned here is to ignore barking dogs.

Wait as long as it takes and the dog will stop barking. To do good, one has to just ignore such noises and the politics, especially when hundreds of thousands of human lives is at stake.

At the initial stage, ASEAN was reluctant to commit in the affair of another member nation. There was also the prejudice among the Buddhist majority member countries to view the Rohingya crisis as religous security threat than of humanity.

However, Malaysia soldier on as it garner support from the international community. Anifah met European Union, OIC, Russia and United States to explain the situation.

Off course, Aung Sung Suu Kyi and Myanmar still has to show earnestness and commitment to address the problem at Cox's Bazar in Bangla Desh but at least, this is by itself a major development. Myanmar and Bangla Desh are beginning to start talking.

That is diplomacy and international relation at work in addressing geo-global and humanity crisis. By not allowing barking dogs to scuttle effort, something could be achieve.

A similar situation is happening in Malaysia.

Anifah have been at work to apply his diplomatic skill in engagement to address the long standing issue in Malaysia involving the rights of Sabah and Sarawak which as alleged by our East Malaysian brothers and sisters felt have been denied since 1963.

It has been a long standing political issue and Sabah has been vocal of it as far back since the early days of our working career. Much of the blame by Sabahans had been leveled towards Federal government i.e. orang Malaya .

However,  the alleged corruption and abuse of power on Dato Shafie Apdal for squandering RM1.5 billion of the RM7.5 billion allocated by Dato Najib's administration for the infrastructure for the interiors indicate that Sabahans is as much at fault.

There were Sabahan leaders conspired with Tun Dr Mahathir in the Projek IC to knock off the PBS government by way of giving citizenship to foreigners in a big way many decades ago.

Najib made the move to acknowledge past mistakes by his predecessors, particularly Mahathir, who recently out of political convenience indirectly acknowledged in Kuching for his past negligence of Sabah and Sarawak.

The group have been convening meetings and there have been advance progress, including discussion with Chief Justice Tan Sri Raus Sharif and Attorney General, Tan Sri Appendi Ali. A matter of time an announcement with specifics could be made. 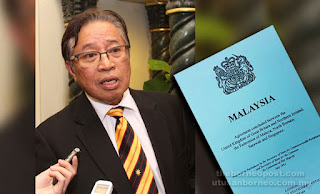 The Sarawak Chief Minister, Datuk Patinggi Abang Johari Openg was reported to have said that the Federal task force to enhance the implementation of the special rights of the peoples of Sabah & Sarawak should be led by the Deputy Prime Minister.

Seriously, Abang Jo is splitting hairs and attempting to start an argument about an inconsequential and trivial aspect of the matter.

The fact that has been missed is that Dato Najib had already established a Cabinet-approved Technical Committee following hard work and lobbying by Anifah.

It is incredulous to say that both these Ministers who are highly trusted by the Prime Minister are not senior enough to advise him.

The Chief Minister needs to do more than propose superficial recommendations that do not assist the peoples of Sabah and Sarawak. He should also be careful about trying to devalue the importance and strength of the Committee sanctioned by the Cabinet.

Instead of undermining the Prime Minister, it would be better if the Chief Minister now evaluates the policies and practices of the State Government these past 54 years since 1963. He should be honest to say that his Government failed to robustly monitor and implement the special rights Sarawakians embedded in the Federal Constitution.

Only after the Foreign Minister had actively campaigned for the better implementation of the rights of Sabahans that Johnny-Come-Lately now is alive to the same possibilities of Sarawakians.

Only then he saw the urgency to make a fact finding trip to London. However, making the trip is one but the subsequent work will need 3 to 4 years more.

The fact gathering and research was already done many years ago. Among them is the adviser, Sarawak engaged. Several forums put together by Anifah in Kota Kinabalu few years ago (in which yours truly attended one) was the the culmination of such effort.

The Humane Society of the United States suggested to ignore dog's barking and not give any attention for as long as it takes him to stop. When he finally quiets, even to take a breath, reward him with a treat.

Anifah should just continue his good work and ignore the barking.

It is more important to not give any attention and focus to ready the treat to reward the people of Sabah and Sarawak with the palace of Merdeka. Hopefully the barking should stop by then.