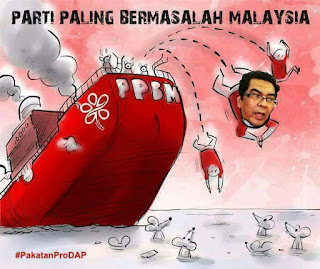 The latest insult hurled at PPBM by pro-BN supporters is to pun the rejected acronym BERSATU as BERSETUBUH.

It is intended for Armada Chief, Syed Saddiq for his statement on safe sex from Paris where social media claimed he was holidaying with girlfriend and Azmin's daughter, Mira Azmin. Name calling is hardly damaging to any seasoned politician. For budding politician, it could be the killer.

It was initially thought a mass resignation would be the killer low blow. It is still a spreading disease but it turned out that the report made by Armada members to the Registrar of Society (ROS) could be the one.

It is similar to the effort by UMNO-11 to take the original UMNO to court and nullify the April 24 1987 party election. Tengku Razaleigh was supposed to have defeated Tun Dr Mahathir had not for the claim by Team B that then Secretary General, Tan Sri Sanusi Junid cheated.

In a move similar to a corporate poison pill or military scorch earth strategy, Mahathir had the KL High Court de-register UMNO. 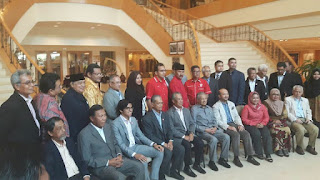 One of the UMNO-11 is in PPBM protem commitee, Dato Nordin Salleh (far right with white hair).

The similar Mahathir manouvre to save his politics then could now be the reason PPBM get de-registered i.e. failing to abide by it's own constitution. It is clearly stated under the relevant acts ROS operate under. 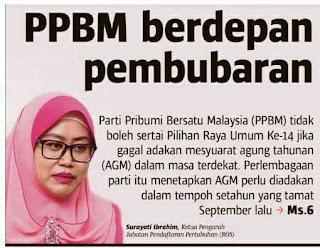 The reasons are many but take a look at the encircled parts of PPBM party constitution below: 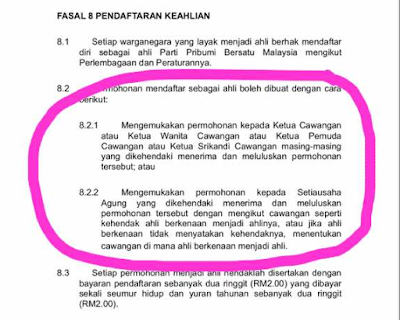 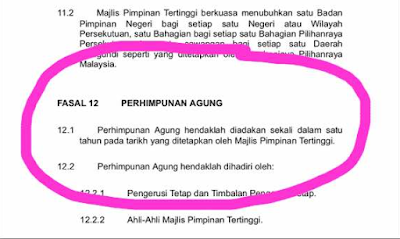 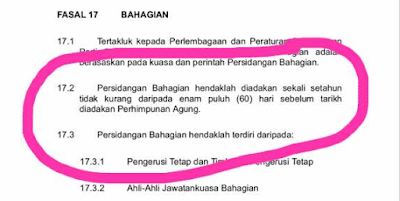 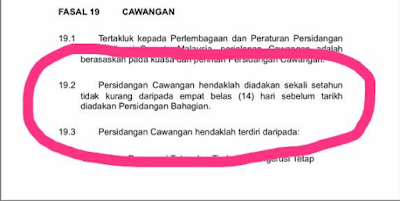 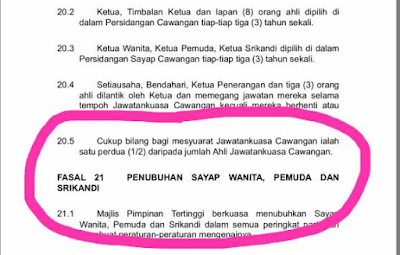 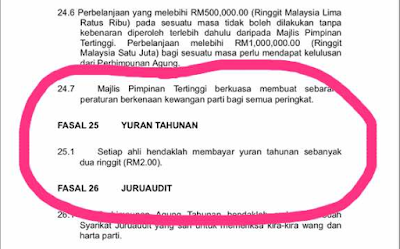 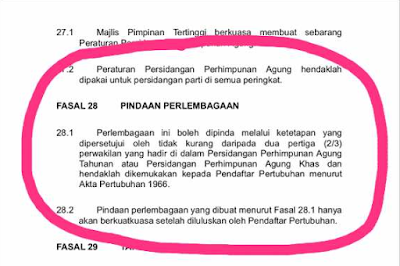 Syed Saddiq contributed to the possible de-registeration for adamantly insisting to use the term Armada instead of Pemuda. For a political party with less than 30,000 members nationwide, the boy seemed ambitous but actually lack the substance and just full of himself.

PPBM Secretariat applied but it was rejected by ROS. It need an amendment that is endorsed in a General Meeting first. But Syed Saddiq insist to use Armada.

Then there is also the status of Armada and Srikandi committee members which has yet to be acknowledged by ROS. If one remember many months back, there was conflict between Tan Sri Muhyiddin and Anina Sadudin on her appointment as Ketua Srikandi and that led to her departure.

Muhyiddin was manouvering to control the party by appointing his man to lead the divisions. Mukhriz or more likely his people was positioning themselves too.

It was a time that even within PPBM, they was the impression that the two Ms were dominating the party and ignoring grassroot party activists and local leadership as though in preparation for future horse trading with UMNO.

It was a time PPBM members believed in their own lies that hoards of UMNO members were joining their party, many in-cohoot still planted in UMNO, and Najib would not withstand the pressure of 1MDB and economic dissatisfaction from the general public.

Mahathir was relentless with his attack but soon, he ran out of bullets after the BNM forex loss RCI and resorted to personal insults, lies and U turn on his past misdemeanors.

The initial report to ROS on the use of Armada invited other report to ROS on improper procedures. Muhyiddin ignored warning and reminders from his underlings. He was still from the generation that believed a leader's prerogative to give the final say is not to be questioned but just abide.

This time around the complain to ROS is more serious. 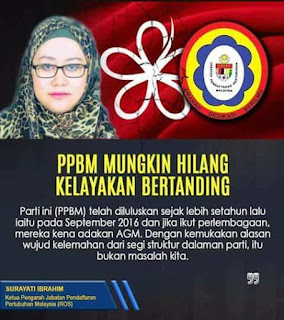 PPBM could be disqualified from running for election for not holding it's AGM within a year. They could hold not hold an AGM because they do not have branches and correspondingly hold branches meeting, then divisional meeting and finally party meeting. 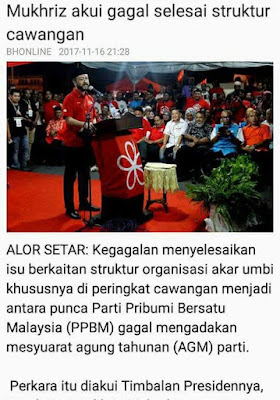 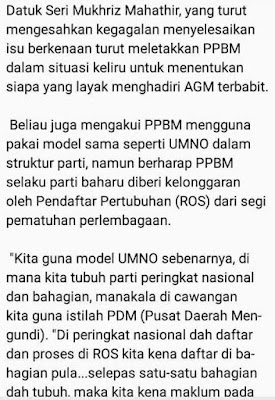 Dato Mukhriz acknowledged the problem and attributed it to their mistake for emulating UMNO's constitution and structure. However, he has a bigger image problem following the expose on his wiife and children extravagant lifestyle as revealed by them on Instagram.

Furthermore, one of the founding committee member of PPBM revealed Mahathir was forced to return to politics to handhold and provide firm footing for boboi in politics.


Boboi has a bigger issue. His heart and mind is not in it. He is neither serious nor dedicated for any  causes.

PPBM was a party in hurry and the attitude of Mahathir was just to knock Najib off.

Mahathir may have ignored and overide Muhyiddin's effort to put structure to the party. Muhyiddin have expressed his frustration privately. Some RM300 million spent and yet PPBM not getting anyway but merely social media hype.

As told by many PPBM insiders, Mahathir's response to the party's lack of a defined political agenda, hearsay on their allegations against Najib, and unclear narrative in their economic arguments was to rid Najib first, figure out the rest later.

The Kerala curry in a hurry recipe does not concoct a good dish. Slowly the structure is falling apart. AGM is not held yet, membership status of those who paid the annual RM2 fee not determined, and bankrupt holding position in party.

Members are disgruntled with the internal power play, leaders playing footsie with their UMNO friends inside, unanswered allegations on Mahathir for RM32.5 billion BNM loss, Proton, Petronas, etc, no evidence on 1MDB brought forward, and growing believe that PPBM is only a fly by night political party that will disband after the general election. 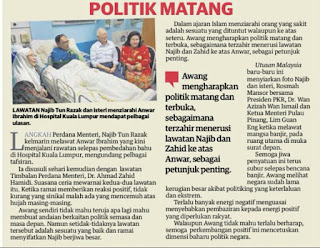 Mahathir told the media he will be meeting Dato Seri Dr Ahmad Zahid Hamidi. Presumably he will plead for PPBM's case. There is also possibility that he will try to salvage and seek for the registration of Pakatan Harapan.

Unlike Mahathir, both Najib and Zahid believe in fairplay and strive for political maturity. However, PPBM must play by the rule. PH could not get registered because PPBM is still at protem stage and still not a fully bona fide organisation.

Zahid could remember that Mahathir did not play fair to block the registration of the loose coalition Angkatan Perpaduan Ummah that existed throughout 1990 to 1995.

If he wants to turn Parti Paling Bermasaalah Malaysia into Pertubuhan Perasuah Bersatu Malaysia, he certainly should own up and apologise in private to Zahid for picking him up in Sabah under ISA. The typical Mahathir vehemently refused to own up on Operasi Lalang and instead blamed it on police.

There is no happening in the country which Mahathir can claim to #taktau. He manipulated the court and ROS for his political survival and to ward off Team B assault from outside UMNO. Not even Anwar Ibrahim's planned demonstration in Kota Kinabalu to start the reformasi movement could miss a Mahathir sabotage.