Is Tony Pua's fate destined to be another political clown like Rafizi? 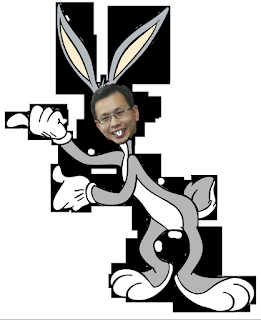 Before the existence of the wannabee character Syed Saddiq or as the social media called him now, Suckdick, the vocal newbie young politicians then were Rafizi, Tony Pua and Nurul Izzah.

Syed Saddiq is a non-starter and demolished by the lift of Dato Hamidah Osman's single finger. Subsequently he kept shooting his own feet with the latest on the safe sex. It is acceptable in PKR or DAP, but not in the so-called Malay right wing, PPBM!

However, his biggest blunder is really insisting the use of Armada for the constitutionally defined Pemuda for PPBM. Together with the formation of a constitutionally non existent Serikandi, Syed Saddiq contributed to the probable early demise of PPBM.

As far as Rafizi is now a gone case. He is facing imprisonment, ostracised by his PKR party leadership and the reputation of INVOKE is up in questions. Likely to be forgotten after serving his sentence.

His effort to rrevive his reputation through Jelajah tour hardly pull any crowd. His bark has lost is volume but still barking is Tony Pua. 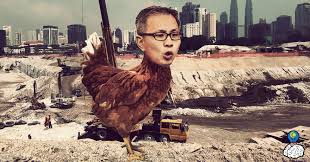 However, if he does not get a conviction on 1MDB or convince a public losing interest on 1MDB development for various reasons  in favour or against Dato Najib, Tony Pua could follow the faith of Syed Saddiq and Rafizi. 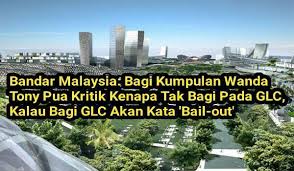 He has boo boo big time on export figures but the public aren't into technical correctness. A bit less technical would be Bandar Malaysia as LSS whacked him kaw kaw below:

When 1MDB sold a stake in Bandar Malaysia, Pakatan complained.

When the govt cancelled the deal, Pakatan complained.

And when the govt re-issued a new RFP for Bandar Malaysia but the govt has yet to announce the results 3 months after the RFP closed, Pakatan complains.

DAP's Tony Pua continues to make silly allegations in his attack on 1MDB when he accused that there are no one interested in the Bandar Malaysia project.

This is despite the fact that the Bandar Malaysia project is immensely attractive as it will be the High Speed Rail (HSR) terminus station for Malaysia (and a MRT station) and will form part of the pan-Asia rail network.

Land prices in Singapore are as much as 20 times higher than in the projected price for Bandar Malaysia - hence the attractiveness of the project of being just 90 mins away by rail from Singapore is undeniable.

The finance ministry launched a RFP on July 5, with a deadline of July 20. This RFP had attracted many international bidders who are from Global Fortune 500 companies.

It is just 3 months after the RFP closed.

When you talk about a project that has a Gross Development Value in excess of RM200 billion, you do not simply close the RFP, make a decision and award immediately.

Such exercises will involve short-listing several parties for negotiations and much due diligence from the buyer and the seller. These negotiations takes time - especially since this is a mega billion project.

I am sure the govt will announce the winner for Bandar Malaysia in due time after all the negotiations with the shortlisted parties have been completed.

This is not your typical mickey mouse project like those favoured by the DAP Penang Govt.

Four months later, there was speculation that Eco World was the only bidder:
https://klse.i3investor.com/blogs/kianweiaritcles/45974.jsp

More than 18 months after PDC's RFP closed was it announced in April 2015 that Eco World was the winner.
https://www.iproperty.com.my/news/10059/eco-world-to-buy-land-in-batu-kawan-from-pdc#ATWeq0uYb8IXCdbj.97

And worse... 14 months later in June 2016, both PDC and Eco World agreed to cancel the award as it was discovered that the land area was not big enough for a golf course despite the fact that the RFP was for building a golf course.
https://www.thestar.com.my/business/business-news/2016/06/08/proposed-golf-course-gets-in-the-way-of-eco-marina-devt/

We are not even talking yet about the failed medical tourism project in Taman Manggis (since 2010) or the Outsourcing center project with Temasek (since 2014) - both of which were Penang Govt RFP and with both projects still still-born today.

If Tony Pua wants to kaypoh on mega-property projects, perhaps he should lend his "expertise" to the DAP Penang Govt which has proven time and again to be shockingly incompetent.

Arul Kanda does not even have to entertain him in a debate and already the wunder boy Lim Kit Siang picked for DAP's succession plan is fumbling all over. 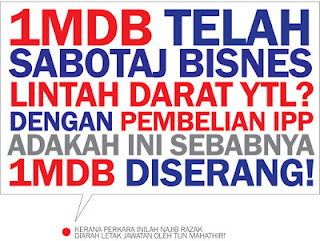 He can't pick on Arul so he tried someone else to raise issues still linked to 1MDB. Still looking like Bugs Bunny as Ongkili replied him:

Speaking to reporters today, Ongkili said his explanation on the issue during his winding-up speech on Tuesday was consistent with Prime Minister Najib Razak’s statement, and not contrary to it.

“Pua’s statement was meant to confuse and smacked of inaccuracies when he alleged that the acquisitions had caused losses which led to the increase of the electricity tariff,” he said.

In a statement on Tuesday, Pua said Ongkili had confirmed his earlier assertion that 1MDB’s takeover of the IPPs had not benefited the people in terms of electricity tariffs.

Pua was referring to the answer he had received from the minister in the Dewan Rakyat to his question on why the electricity tariff had not been reduced since 1MDB’s purchase of the IPPs.

According to Pua, Ongkili’s statement that the tariff rate had been maintained as finalised in the Power Purchase Agreement (PPA) meant 1MDB’s involvement in the renegotiation of the lopsided PPAs had no effect at all.

On the contrary, said Ongkili, his statement was meant to point out that the renegotiation had been thoroughly successful and beneficial for the people.

“For example, a review of the first generation tariff with the Kuala Langan Power Plan led to the reduction of the PPA tariff,” he said.

Ongkili added that three years ago, PD Power had requested for an extension after the initial 21-year PPA ended.

The extension of the power plant’s operations was offered in an open tender, and one of 1MDB’s subsidiaries happened to win the tender.

Because of this, he said, the new tariff was 30% to 40% lower than the initial tariff before it was reopened for tender.

“This proves that 1MDB’s involvement is beneficial to the people. Pua alleged that I had mentioned the tariff cannot be changed, and he is right to a point.

“However, he did not mention that the tariff cannot be changed in the sense that it cannot be increased.

“But the tariffs can be decreased. All the charges can be reduced, but none of them can be increased to more than the initial agreed tariff rate.

“Yet, Pua did not say this. Why? Because he is trying to confuse the people,” he said.

1MDB said Pua had confused the PPA tariff with the electricity tariff, maintaining that it had indeed helped reduce the former.

“As Pua well knows, the PPA tariff is only one component of the electricity tariff, with other components being fuel costs, transmission and distribution costs, etc.

“It is a fact that 1MDB generated competition during PPA bidding for new power plants and renewal of PPA contracts for existing power plants.”

According to the fund, PPA tariffs for new and existing plants were reduced by between 1 and 2 sen per KW/H as a result of 1MDB’s participation.

“Based on an 85% capacity factor, a 1-sen tariff per KW/H reduction on a 2,000 MW power plant over 20 years can result in up to RM3 billion in cost savings over the life of a PPA, for one power plant.

“The savings are multiplied significantly across other PPAs. This in turn lowers the overall PPA tariff cost to Tenaga Nasional Bhd, which is the sole buyer under all PPAs, and contributes towards the electricity tariff.”


It only proves that 1MDB’s involvement (in the power sector) is beneficial to the people and Tun Dr Mahathir was gunning down 1MDB to safeguard the interest of his cronies (or likely proxies).

In the meanwhile, let us leave Tony Pua to wallow in self denial to continue barking and charging like a dog and a pig till his fated political demise come to being.

And, there is still the tough nut Nurul Izzah to crack.

Some say she has the aura of Anwar and Mahathir to be able to craash and burn in her public statements but still get away with it.

But let's not forget the term tipping point once promoted by blogger and now second term MP for Jelutong, Jeff Ooi. Even the  charismatic Anwar and the mighty Mahathir can fall to the accused as coward and "lembik" Najib. Nothing more lethal than the sleuth soft and gentlemanly touch.

Time will have to wait because Nurul may have realised it. She has been keeping herself relatively quiet and playing it carefully till a new social trend emerge.

Tony Pua is only good at barking at all these macro issues such as 1MDB, MRT3, Littoral Combat Ships and so forth in an attempt to gain brownie points against the present government in the hope that the opposition can gain votes by showing up the alleged corruption or mismanagement on the part of the federal government.

However, he does not seem to be bothered about the local conditions on the ground within his parliamentary constituency of Petaling Jaya Utara (P106) within which come the state constituencies of Kampung Tunku (N35) and Damansara Utama (N36).

I was taking a walk in the Seksyen 21 Petaling Jaya commercial centre a few days ago and noticed some road signs were missing and the general area surrounding the shoplots was rather shabby.

Seksyen 21 Timur is within the Kampung Tunku, whilst Seksyen 21 Barat, Seksyen 21 Selatan are within Damansara Utama.

I go to the commercial area around the shoplots in SS24 Petaling Jaya and the public sidewalks, crossing over the wide open drains and so forth shabby and the place is rather rat infested.

SS24 is within Damanasara Utama.

However, overall I find most areas on the ground within Kampung Tunku and Damansara Utama to be shabby, with the exception perhaps of the newer areas such as SS21, Bandar Utama (BU), PJU and so forth.

Such local conditions are more important to a humble resident like me that all these macro issues which the likes of Tony Pua go harping on about.

Even Tony Pua's comrade Sivarasa told him to butt out of the Deepavali Bazaar issue in October 2015, The Star reported:-

“He should concentrate on those issues and leave more mundane issues, like as in this case, about where a Deepavali bazaar should be located, to the appropriate authorities to decide,” he said in a statement on Monday.

“My advice to both (Lau) Weng San (Kampung Tunku assemblyman) and Tony is that such matters are best left to the judgment of Petaling Jaya Mayor and his councillors.

“We should not interfere unless the decisions made at Petaling Jaya City Council (MBPJ) are clearly unreasonable or obviously wrong or against stated policies of the Pakatan coalition,” he (Sivarasa) said.

I'm sure many Hindu voters will 'love' Tony Pua for that.

They want to change the current government..
But what have they been doin for the past how many years..
To show us that they 'wakil rakyat'?
Pembangkang havent do much for us to see that they are good to us people..