Mahathir have to answer for his past 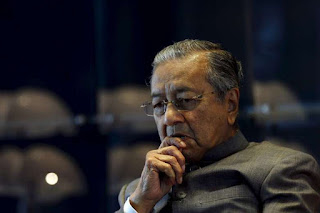 Before 2003, yours truly was not a Tun Dr Mahathir fan.

Being involved in the financial and investment sector, there was too much known of "dealings" linked to him. This was accelerated after he was able to thwart off challenges by Team B faction led by Tengku Razaleigh Hamzah in the mid-1980s.

The rivalry politics between Team A and Team B in UMNO was brutal, revolting and despicable with lots of underhanded play.

But then, politics was not our daily cup of tea. It was only pastime conversation piece over drinks with Alumni buddies at our then affordable hangout, the Hilton Corner hawker stalls. The site has since turned into hotels and office buildings.

Come 1997, the financial crisis happenned and then came reformasi. For the bigger cause and and higher agenda, defending Mahathir was necessary.

Dato Seri Anwar Ibrahim used every means to wrestle power including getting foreigners to bring the Malaysian economy down.

Those involved to bring ringgit down were many known names aligned to Anwar including Tan Sri Quek Leng Chan, Tan Sri Rashid Hussein (though was initially Tun Daim men), and others whose names will be withheld till it is necessary to reveal.

There were institutions like Tabung Haji, Khazanah Nasional, State Street Bank, and others including personalities inside Bank Negara Malaysia.

When Mahathir left government, we were thrilled with a comment he made in his speech at Dato Mukhriz's victory breakfast celebration at Restoren Melayu for winning the highest number of votes for exco Pemuda UMNO. He touched on Malay feudelism.

Finally someone of his stature acknowledged that the root cause of Malay malaise and economic handicap was the cultural phenomenon with a uniquely Malay character.

Mahathir promised he would not stop talking. Not knowing it was for other reasons, that was thought to be an opportunity to be a part of the national debate through him. Event unfolds and eventually, became close to the Mahathir circle but not necessarily inner circle.

However, things changed when he started behaving oddly after Anwar was imprisoned for sodomy the second time around. He was in his elements again to topple another leader. This time it is Dato Najib.

We got involved in bringing down Pak Lah, but this time enough is enough. More so, his reasons are not convincing. He was factually wrong. And he had admitted to not having proofs.

Greed and hunger for control was obvious in the last encounter in 2015. He had no valid reasons to oust Najib and was bullshiting. One could not help notice he wavered on a certain cause. And he could not answer convincingly who to replace Najib with.

What you see, and hear from him is not what you think it is. On deeper analysis, he lied!

Over the years of being close to the Mahathir "camp", we had seek for answers on many issues. There are quite many issues his people refused to answer or could get upset for asking.

One issue pursued patiently was the BNM forex loss, its link to currency crisis, and transactions linked to it. Today, more is now known. It is another Mahathir administration's reckless foray for quick money in the financial market.

This time it cost the country and rakyat RM32.5 billion. It is worth many more today. There is also the suspicion that the real loss is less and the bulk is squandered into an overseas account.

The currency crisis of 1997 is linked to BNM forex loss in 1994 and Anwar's people took advantage of secrets behind the forex loss. And, we know the guilty person is not just Tan Sri Nor Mohamed Yakcop but Mahathir himself. So George Soros was another of many Mahathir's convenient scapegoats.

Developments proved that the decision made to leave him is now proven right. Najib may have his shortcomings but the biggest devil remain Mahathir. Like what Anwar Ibrahim did to the country on the forex, Mahathir did the same using 1MDB, the vehicle to solve his legacy of financial mess to the country.

Between the devil one know and the angel we are still understanding more of, the choice is not to remain with the devil. It has proven to be the right decision as he marched at BERSIH and joined forces with the opposition he unfairly attacked and slandered with his twisted arguments.

Today, every position and actions he made in the past are dishonestly denied, U turned and pretended to #Taktau. His ploy to accuse others of the many many wrongdoings of his own as a cover-up is obvious.

His supporters called it politics, but it is outright lying, irresponsible and dishonest. It is politic of deception that cheapened the stature of someone addressed as statesman to that of a pariah.

The glorious image Mahathir manufactured of himself for his pentaksub to believe is but merely lies and a fake. Mahathir is a superb politicians but not that great as a leader and failed in nation building. He cost the country hundreds of billions of failed endeavours, which were not feasible in the first place without government crutches.

Not to mentioned, there could be allegedly hundreds of billions squandered through proxies, families, and cronies placed in the country and more abroad in money centres like Montevideo and Geneva.

Now that Mahathir is leading the opposition, they will be burdened to answer for his wrongful past. 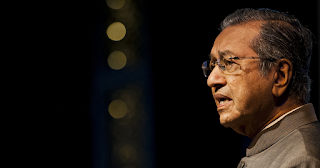 Can you afford personal bodyguards? Neither can I. I’m reasonably certain, however, that Mahathir and his family are well able to hire a small army of them. So, spare me the righteous, gratuitous outrage over the recent claim – made by Mahathir himself – that his government-provided Special Action Unit (UTK) bodyguards were withdrawn.

First, let’s get the details of this story straight. Inspector-General of Police Mohamad Fuzi Harun unequivocally stated that UTK personnel still guarded Mahathir. He clarified that only ordinary police officers accompanying our former premier were reassigned – part of standard procedure. Unless Mahathir and his fanatical devotees can prove otherwise, I’m apt to believe the police chief.

And would it be so terrible if Mahathir lost his entire police protection detail? Last I checked, he and his family aren’t the exactly the impoverished sort. Forbes ranked one of his sons, Mokhzani Mahathir, as the 34th richest person in Malaysia with a net worth of USD$420 million – easily making him a billionaire within our shores. Mahathir himself often flies on a private jet. Bodyguards, well-trained and well-armed, would be smaller than small change.

Of course, the Mahathir family’s massive accumulation of wealth in a relatively short space of time had always raised many eyebrows and drew many critics. Back in 2012, here’s what self-styled guru of reformasi Anwar Ibrahim had to say about Mahathir and his sons:


It’s fully up to Mahathir to answer those allegations made by his former nemesis and now ally. And it’s up to Anwar to tell us if he still believes those things. But regardless, Mahathir doesn’t need your sympathy. If you want to feel bad for anyone, there are plenty more deserving individuals.

Feel bad for the millions of Malaysians who, on a daily basis, must pay outrageously high toll fares as they drive to and from work. Most of these absurdly lopsided toll concession agreements were signed during – you guessed it – Mahathir’s tenure as PM, making them extremely difficult to amend without some sort of government compensation. Don’t feel bad for crony highway operators who will laugh their way to the bank either way.

Feel bad for the millions of Malaysians who – thanks to Mahathir’s automotive policies – were forced to choose between buying a substandard car (read: Proton), and buying a foreign one for two, three, or four times its actual price. Feel bad for public transport commuters who had to contend with poor services and limited reach because Mr. Vision 2020 was too obsessed with promoting Proton. Read more about that HERE.

Feel bad for the 100-plus Malaysians detained without trial under the ISA during the Mahathir-approved Ops Lalang in 1987. Many were snatched from their families during the dead of night, and some were allegedly tortured. Don’t feel bad for Mahathir, who, thirty years later, could only offer those wronged a laughably shameful non-apology – “I accept the blame even though the detention was not my decision,” he wrote on his blog, referring to the arrests. (In case you’re wondering, he has maintained that he merely followed the police’s advice at the time. You decide if that’s believable.)

Feel bad for the reformasi protesters beaten and kicked by Mahathir’s unforgiving police force in 1998 (watch this VIDEO). Where was their protection under the law? Maybe they should’ve brought their personal bodyguards? Today, Mahathir is free to join any demonstration (Bersih or not) without fear of molestation. It’s a shame that he didn’t extend that same courtesy to his detractors back then.

Here’s the thing: We are told, with melodramatic flourish, to give Mahathir the respect and dignity he deserves. But were the victims of his regime ever afforded the same? Were they spared the financial costs and outright brutality of his policies? Save your sympathy, outrage, and support for them. Mahathir and family will just have to make do with their massive wealth and influence. I know, I know – it’s intolerable to see the privileged suffer such indignities.

Many questions on Mahathir's pasts have found it's answers. There are still many more yet to be disclose and specifics elaborate. Whether he win or lose, it will still be a continual pursuit for truth as we move on to other endeavours.

Even if he does try to answer in order to appease opposition supporters, he cannot change his bad habit to cover-up, lie and blame others.

The full truth is still out there but from what is now known and available, it is not possible to ever support and trust him anymore. Najib is the best option for Barisan Nasional, and even against any other possible candidates the opposition could offer to lead the country.

Better to support Najib than change him. Worst would to revert back to the very old dictator or any of his choice of successor. Mahathir has Azmin in mind. He has not said it but whenever Azmin got on his nerve, he chose to stay away from an encounter. The opposition leaders seemed to protect and insulate Azmin.

Many of Mahathir's diehards are hoping for past glory by having him return. He could return but to his maker. Having him back will be a disaster of placing the wrong person to lead the country at the wrong time and different domestic and global political, economic and technological landscape.

Mahathir is out of touch with reality. He is only best as a politician. He had never sincerely acted in the best interest of "agama, bangsa dan tanahair". The Machivellian and psychologically insecure son of an immigrant from Kerala, India in him could not make himself to stand above politics and be magnanimous.

No matter how bad mahatir was during his tenure,najib is 10 times worse.


YM Tengku Razaleigh is actually the best person to lead Malaysia after GE 14 . How , let UMNO and Malaysian , respectively , decides .