No soul left in DAP 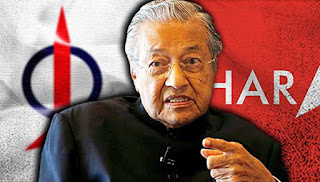 I had been a loyal DAP life member and believed in their strugle since my youth day. Back in my university days in University Malaya, our student movement with reformasi days was about removing the corruption and nepotism if Mahathir Mohamad.

I brave thru ceramah with my umbrela during the rain to listen to Anwar Ibrahim speaking out against the government of the day led by Mahathir and his cronies. Tales of how he enrich his sons and Daim is still fresh in my mind.

At the stage with Anwar was Lim Kit Siang and Lim Guan Eng telling their tales of ISA brutality and their time in prison during the days of Operasi Lalang. Hearing this make me cried and wonder what kind of ditactorship our country went through under the rule of Mahathir.

Fast track 19 years later, my heart bled seeing the situation today. Enemis coming together sitting under the same roof calling for a change for the country. It is a commendable effort and I was like this is the way to go. Uniting for the common caused.

But looking deeper events after events, my heart goes into despair. The last straw came when Mahathir latest party called out for donation to his party to fund them for election.

In my mind I was like what happen to the billions of Ringgit his sons 'earned'. Why they did not donate their own monies to contribute to the funds? After all these monies was so called contracts from the government when Mahathir was in power.

I was once told during the countless ceramah by opposition figure such as Anwar Ibrahim, Lim Kit Siang, Lim Guan Eng and Tok Guru Nik Aziz that Mahathir embelzzed government monies and enrich his sons and cronies. Why now they couldn't help with the opposition strugle?

I am sure with the sons monies the war chest will be huge to topple Barisan Nasional government. But yet asking from the rakyat. I struggle to understand why?

Is it for populism or really to enlarge the coffer? Only Mahathir will know. But when Mahathir and Co. published the so call donation drive for his party, I couldn't but help to remember what took place during the ceramah I attended in the late 90s. Countless of donation drive box was passed around to support the Reformasi struggle during those days.

But now I couldn't help but to wonder what is the point of asking for donation for Pribumi when the people behind it, is rich. I can only deduced that saving Malaysia is about saving Mahathir and his sons back into important government position to get more projects which translates into more monies and I couldn't but help to imagine that both father and son of the Lim, are they really saving Malaysia or saving the coffer for themselves just like Mahathir.

Ever since the undersea tunnel scandal came into light and huge sums of monies was so called to 'kawtim', my heart bled out that DAP has sway away from its founding struggles. The DAP that I onced knew is now turning into a capitalist association of people. Now its all about monies and that is why power is so important.

Now the Lim's are embracing Mahathir capalitalism and cronism and it is a sad day for all of us. The man who once lamented he was beaten and imprisoned during Operasi Lalang is embracing and hugging the very man he said can save Malaysia.

No wonder supporter like us and the youth is calling for 'undi rosak'. Now I couldn't but help to lament the future of this country if it falls unto the hand of these power hungry and monies crazy men.

Clearly hijacked by mahathir and his minions.Main cause,mahathir must have invested huge sum as what being told by rpk in his column.Abandon ship is and option.

Clearly hijacked by mahathir and his minions.Main cause,mahathir must have invested huge sum as what being told by rpk in his column.Abandon ship is and option.