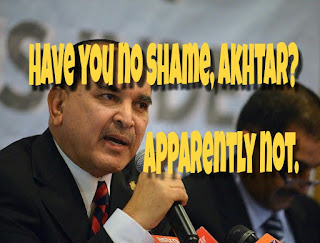 The message in our past posting here on TI Malaysia's recent rating for a lower Corruption Perception Index (CPI) for Malaysia that investigation only increase perception of corruption.

Thus the way to lower corruption measure is to allow corruption to flourish and cover-up any possibility of being caught.

The CPI is seriously flawed as a measure of corruption. It runs counter to the unprecedented effort to combat corruption by imtensive investigation by MACC.

TI Malaysia's explanation was political. Dato Dr Akhtar highlighted certain corruption cases that could conveniently be linked to the federal government but not mention bigger cases that are linked to opposition-led states and a certain former Prime Minister.

As Deputy President of Parti Cina Malaysia, Datok Huan Cheng Guan highlighted, its the opposition side that is swarmed with bigger corruption cases.

The quantum of forex trading losses of BNM linked to the former PM but may not be entirely from trading is RM31.5 billion.

A former WSJ reporter estimated corruption of the former PM is USD100.billion.

Few years ago a DAP official in Melaka made a police report claiming the sum to be in the tune of RM1.15 trillion.

These information is public knowledge but yet, the watchdog effectively claimed today that corruption was less rampant under the former Prime Minister.

A clear case of blindly accepting data without proper and objective analysis. Oh boy, even idiots could hold a doctoral degree and honoured as a Datok.

Thanks to Jahabar Saddiq and The Malaysia Insight for highlighting his idiocrasy at the pre-election intelectual conference gimmick of the opposition's so-called think tank, Institiut Darul Ehsan.

His spinning and lack of objectivity to telling: 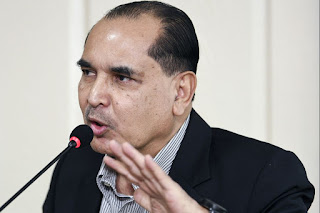 "The CPI was started in 1994 and under the former prime ministers’ time, it was alright.

"After the 1MDB and SRC International cases, it started to drop after 2014 and it kept going down.

"It will continue to drop until the issues are resolved," Akhbar said during a forum titled ‘Malaysia a corrupt country: Facts or Propaganda" organised by Institut Darul Ehsan in Shah Alam today.

"We have dropped by seven points and this is our worst ranking. We are on par with Cuba."

The CPI is a global aggregate index comprising perceptions of corruption in the public sector.

The CPI is calculated based on abuse of power for private gain and the role of public officials and institutions.

Akbar said for the to CPI improve, all unresolved cases such as 1MDB, SRC International, Felda must be investigated.

"This is to ensure Malaysians will trust that investigations are done without fear or favour."

"During both the prime minister's tenure the CPI ranking was good.