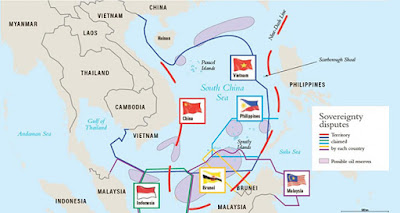 
On Monday, the US raised the stakes, saying "Beijing's claims to offshore resources" across most of the disputed seas were "completely unlawful". US Secretary of State Mike Pompeo added that the world would "not allow Beijing to treat the South China Sea as its maritime empire."

Earlier on July 6th, US conducted a military exercise at the South China Sea. The position taken by US indicate their interest to participate in the dispute.

The cowboy manner of US intervention in international disputes is not something countries in the region should look forward as it usually flare-up into a full blown war.

Malaysia have been looking to other options to avoid the possibility of superpowers doing battle at its doorstep.

Foreign Minister, Dato Hishamuddin Hussein tried to cool temperature by playing down media attention to the rising dispute with claims no Chinese ships sighted in Malaysian water for 100 days. 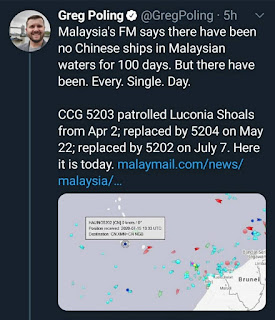 It is not sufficiently comforting as it confirmed Chinese regular intrusions.

His statement was rebuked in the twitter of Greg Polling, a Senior Fellow of SoutheastAsiaDC, who claimed Chinese have been patrolling into Malaysian water every single day. He referred to Hishamuddin's denial as reported by MMO here.

Backing the twitter, the Auditor General report 2018 claimed that there have been 89 incursion by Chinese ships in Malaysian waters between 2016 to 2019. The report highlighted a lack of coordination between enforcement departments and agencies.

The former defense Minister's reply was strongly rebuked by former Foreign Minister, Dato Anifah Aman as being in-denial or ignorant.

For Sabahans, China's daily presence near their waters and millitary bases on several man-made island in the shoals of the South China Sea are too close for comfort.

The bigger concern should be the intrusion could eventually deny us of our own fossil resources and escalate into international conflict.

Malaysia's relation with China face the dilemma arising from their false 9th dash line claims. However, there is no mileage to gain with a strong stance against its most important trading partner, wrote Tan Siew Mun in MMO here on July 16th 2016 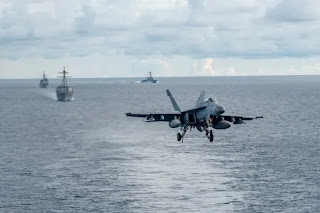 Hishamuddin's conciliatory statements was obviously intended to allay fear and panic to the public.

He immediately responded to Anifah with a plea for peaceful settlement but with the wishful hope China will respect international law and conventions.

US's recent tough stance need to bring  about an immediate change in attitude on the Chinese part to avoid the situation from escalating further.

SCMP reported a Hainan based researcher called on Beijing to assess its strategies for South China Seas in relation to Washington. One can only hope for it to happen. When superpowers set their eyes on a certain interest, they do not waver.

China ignored decision by a tribunal at The Hague arising from a suit brought by the Philippines in 2016. The ruling rejected China's “historic title” over the waters.

The 9 dash line was superseded by the 1982 UN Convention on the Law of the Sea. China's own record dispute their claim of historic rights.

China have been making increasing military presence in the South China Sea. God forbid Sabah could be turned into the 24th province of China overnight. 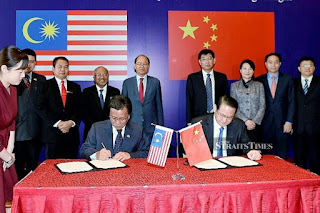 He was questioning the failure of previous announcements by Shafie and wasted Yayasan Sabah land worth hundreds of million.

The bigger concern would be Shafie's enthusiasm to bring Chinese investment may pose a security threat with their increase presence in Sabah. If he received bribes, China could dictate him.

In his attempt to save Shafie's position as Chief Minister and Warisan as the state's ruling party, Tun Dr Mahathir pulled off a stunt to propose him as the 9th Prime Minister of Malaysia.

It boost support from within PH coalition. However, the fear is instead of moving to Kuala Lumpur, Shafie may only end up Governor of a Chinese province and making regular trips to Beijing to only take orders without question.

Sabahans and its politicians have been uttering threats of leaving Malaysia. Their dream may come true with Shafie.

Eye on the ball 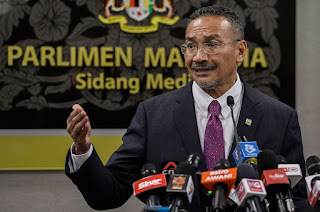 Hishamuddin would not want that to happen under his watch at Wisma Putra.

He has to move his attention away from political monuvering to let UMNO President do his job and focus on the delicate state of Malaysia's threatened sovereignty to a superpower and authoritarian regime.

Anifah statement is a wake up call on Hishamuddin to keep his eyes on the ball, and maintain a firm and clear on Malaysia's position on South China Sea. One cannot perpetually have the cake and eat it too.

His statement as follows:


Press Statement by YBhg Datuk Seri Panglima Anifah Haji Aman on the Recent News Reports Quoting That There Was No Further Enroachment By Chinese Vessels into Malaysia's Maritime Areas in the South China Sea and cara bagaimana kita lakukannya, is between us and the leadership in China”.

I read with great interest the many news reports that the Minister of Foreign Affairs, YB Dato’ Seri Hishammuddin Tun Hussien had stated on 15 July 2020 that since he took over as the Foreign Minister of Malaysia, there was no further encroachment by Chinese vessels into Malaysia’s maritime areas in the South China Sea, and “cara bagaimana kita lakukannya, is between us and the leadership in China”.

I am appalled by the Minister’s statement. He is either in denial or ignorant of the fact. Worst, he is playing politics with Malaysia’s maritime and strategic interests.

It was only in April that a flotilla of Chinese enforcement vessels was sighted accompanying a Chinese survey vessel within Malaysia maritime areas. Further, I was reliably informed that Chinese coast guard vessels were sighted in the vicinity of Beting Patinggi Ali in May, June and July.

As a country that legitimately owns maritime areas in the South China Sea, the Government should not be hesitant to categorically state its objection to any unauthorised activities by foreign vessels within its maritime areas. If the Ministry of Foreign Affairs finds it appropriate to issue statement on 25  June and 12 July on the drone and missile attacks towards the Kingdom of Saudi Arabia, surely it would not be too much to expect the Ministry to at least summon the Ambassador of the People’s Republic of China to register Malaysia’s displeasure on the unauthorised activities by the Chinese coast guard vessels within Malaysia’s maritime areas in the South China Sea.

Malaysia has never recognised China’s claims over its maritime areas in the South China Sea and the Government must uphold the position to ensure Malaysia’s maritime and strategic interests are not jeopardised. Failing to do so is a great disservice to the nation.

Being firm in safeguarding, protecting and promoting Malaysia’s maritime and strategic interests does not mean we need to be confrontational. What we need to do is to ensure full respect for legal and diplomatic processes, and uphold the supremacy of the rule of law in accordance with international law and the 1982 United Nations Convention on the Law of the Sea.

As I have stated many times, we must not be indecisive in defending our rights and interests, and a consistent principled position would stand us in good stead for the long term.

By the way, foreign affairs matter is best dealt at Wisma Putera in Putrajaya and by building international relations through developing personal relations.
at 7/16/2020 10:41:00 PM

"By the way, foreign affairs matter is best dealt at Wisma Putera in Putrajaya and by building international relations through developing personal relations."


I refer to the Press Statement by the Minister of Foreign Affairs, YB Dato’ Seri Hishammuddin Tun Hussein on 16 July 2020.

I would like to thank the Minister for taking time out of his busy schedule to respond to my statement.

While I appreciate the Minister’s clarification, West Capella was not mentioned at any point during his Press Conference or in the many news reports following the Press Conference.

Therefore it was unbecoming on the part of the Minister to state that I misunderstood what he had said when he himself should be blamed for not being clear and transparent in his statement.

And if Malaysia’s position on the South China Sea has not changed, what prevents the Minister from openly and categorically register our displeasure on the activities of the Chinese survey vessel Haiyang Dizhi 8 and its flotilla in Malaysia’s maritime areas in April and May; and why the Ministry has not responded or replied to the note verbale from the People’s Republic of China objecting Malaysia Partial Submission to the Commission on the Limits of the Continental Shelf.

Otherwise Malaysia’s consistent and principled position of not recognising China’s claims over Malaysia’s maritime areas in the South China Sea would be jeopardised.

Malaysia is an independent sovereign country that is a friend to all, and enemy to none. China is one of our closest partners and through my experience, I have had my fair share engaging with China’s Foreign Minister, and raised our concerns on matters relating to the peace, security and stability in the South China Sea, although I must say that it was not always smooth. Indeed, it takes a great deal of courage to stand up to your enemy, but a great deal more to stand up to one of your closest friends as China is indeed one of our closest friends.