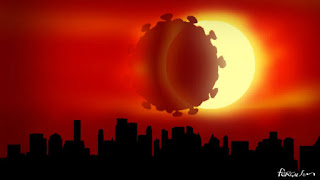 In the previous posting, Post-Pandemic: Important leaders still not get it yet, this blog concluded the opinion piece on post-Pandemic economic planning with the view that the task ahead in facing up to the new challenges of the nation lies in education.

The likelihood is policymaker will be too focused on post Covid economic recovery that they missed out on a sudden change in human behaviour and attitude that will set a new social, economic and political order.

People are forced into self reflection and subsequently becoming more spiritual. This blogger underwent that phase in this April posting here.

There could be greater consciousness for ethics and morality, compassion for humanity, and greater concern on past neglect and disrespect on nature and environment.

Higher education is expected upon to play the role to harness potential, identify needs, opportunity, problems and envision trends, and finally generate knowledge and train people.

However, to achieve the desired result, the nation need to be done with the kiasu culture of money for money sake of 22 years and 22 months.

The nation need men and women of good character to carry out their role with sincerity and dedication. In spirituality lies the answer.

Spirituality need be imbued into education and at the work place. Many may have missed the following NST editorial in early 2020:

But how do we produce men who empower people, preserve the planet, build shared prosperity and foster peace? Not easy, but there is an ancient Grecian remedy. Poet Pindar put it thus: ‘Learn what you are and be such.’ Many learned others who came after him said the same thing but in different words: learn to be a good man.

A good man will necessarily be a good citizen. Yes, we must equip our children with the practical skills to live a good life.

But more than that, we must make them good men. Perhaps Martin Luther King Jr said it well:‘Intelligence plus character is the goal of true education.

Education which stops with efficiency may prove the greatest menace to society.’

If the aim is to shape the child as an integrated human being - one who is intellectually and spiritually complete - then we must put in place a system that does that. In a plural society such as Malaysia, where every race wants what is good for itself, such a goal will have to confront many hurdles.

Even the teaching of language, and the national language at that, generates endless debate. What’s more, if issues of spiritual education are thrown into this uneasy mix. But confront we must.

Otherwise, we will end up educating only the intellect. And that, as Martin Luther King had warned, may prove to be ‘the greatest menace to society’.

The common man - the one on the Rapid omnibus - often mistakes religious education to be all about holy texts and the hereafter.

Not so. It is as much about life on planet Earth as life hereafter. A typical syllabus includes religious sciences and rational sciences.

There is equal emphasis on religious texts, theology and metaphysics on the one hand and human sciences, natural sciences and applied sciences on the other.

The argument here is teaching of character needs a context, the setting of religious sciences. Many schools in Europe with a religious-education focus, adopt this approach.

So do institutions that teach Islam.

If the damage done by men to men or to the planet is to be a measure of the success of our education system - in Malaysia and elsewhere - then it has failed us miserably.

Men continue to maim and murder despite two world wars in one century. Of the two, World War 2 was the deadliest with one estimate putting the number of people killed at 85 million.

World War 1 may have taken fewer lives, but it was still a tragic 22 million.

And we have not stopped killing. We have not even finished counting the human cost in Iraq, we are already at war in Syria and Yemen.

Other wars are brewing. We may have had the years at school, but educated we are not.

Perhaps we have forgotten the formula. To be truly educated, our intelligence quotient must equal our spiritual quotient. E=iq,sq.

The yearning for power, trapping of wealth and basking in glory needs a moral revolution to change such past negative culture.

Whether there will be such post Pandemic moral revolution or not, one have to wait for it to develop.

Even if it does not comes, an education system that imbue spirituality will create positive attribute of benefit to the nation.
at 7/06/2020 01:57:00 PM