Preserving UMNO is a priority 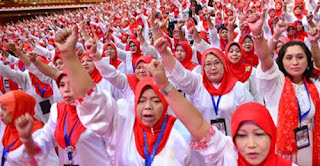 The motion to remove House Speaker, Tan Sri Mohd Ariff Mohd Yusof yesterday won by a slim 111 against 109. Ariff accepted the decision as "he who appoints has the power to remove". It is customary for ruling party to put their own man.

There are voices playing down the house decision as not surpassing the 112 majority, but in his victory over Tengku Razaleigh Hamzah in the 1987 UMNO party election, it was Tun Dr Mahathir who said "A win by one is still a win".

The slim win does put into question the fragile state of the "Perikatan Nasional", the upcoming agenda #27 on vote of no confidence, and even calls for an immediate snap general election to follow Singapore.

There is growing fear that the economic fallout from Corona Covid 19 pandemic will worsen next year. Government need a fresh mandate to face it. PAP lost 10 seats to Worker's party over the weekend.

Since the endorsement of Tan Sri Muhyiddin as PM candidate for GE15 in the meeting of PN leaders prior to parliament, social media debated on UMNO's endorsement have been lively - for and against such move.

At the party leadership level, the decision to be made is not singular in purpose since at the crossroad of its existence, UMNO need to ponder hard on the future ramification.

The long and short of it, the preservation of UMNO should be the highest priority to all level within and without the the party. 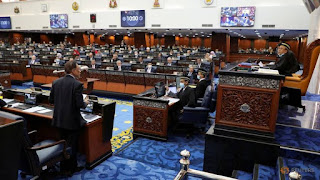 Certain faction strongly believe that UMNO should have offered their list of candidate to include the renewed popular Dato Mohd Najib Tun Abdul Razak, instead of endorsing Muhyiddin. On the other hand, the political realist felt the endorsement was necessary.

Their views may have touched on PPBM and lead to reactions from leaders Wan Saiful, Tan Sri Rais Yatim, Dato Dr Latif Ahmad and Armada leader from Perak.

Though statements from UMNO and PAS leaders seem to indicate all systems go with PN, talk is both are not comfortable with the idea championed by Dato Hamzah Zainuddin to register PN.

UMNO has its Barisan Nasional coalition and PAS its coalition in Gagasan Sejahtera. MN is the apex coalition that ties it all. Seat allocation discussion have been on-going and almost consummated. To include PPBM and more so, Azmin's former PKR faction, it complicates the set arrangement.

There are the questions of sincerity on the part of Muhyiddin, and sly moves of Tun Dr Mahathir, including the independent pact with Warisan that raise suspicion to systematically weaken UMNO.

Within UMNO, there are sceptics suspicious of Azmin's political manouvering, entry of Gerakan into PN, and even the existing understanding with PAS.

All these require a formula to begin discussion as it is still a long way from sorting out the kinks.

For one, Muhyiddin need to feel comfortable with his position and role of the seized down PPBM before he dare seek a fresh mandate to strengthen and stabilise PN.

It is politically interesting that Najib-friendly politicians such Dato Nazri Aziz and Dato Tajuddin Rahman started laying the ground for Muhyiddin to return to UMNO with invitation and suggestion to take up UMNO Presidency.

Whether it is a bait or out of sincerity for Malay unity, it needs the concurrence of UMNO President, Dato Dr Ahmad Zahid Hamidi, and the possibility of BossKu making a political comeback should he be acquited in the SRC court decision on July 28th.

UMNO has other aspirants for the top party positions in the likes of Dato Mohamed Hassan, Dato Hishamuddin Tun Hussein Onn, Dato Ismail Sabri, Tan Sri Annuar Musa and many others.

Which ever way the party leadership or influential personalities move the party forward, foremost in their mind, considerations and priorities must be to preserve UMNO as the dominant political party to represent the Malays and extends to the Orang Asli and various Pribumi of Sabah and Sarawak.

There are several rationale on the need to preserve UMNO.

For one, it is the political party with the largest membership, widest network and represent the majority indigenous people of the country. Breaking it up will disunite the Malays, and weaken the nation by opening it up to destabilising elements.

PAS is the second largest Malay Muslim political party and the late Tun Abdul Razak acknowledge its presence to say, "When UMNO fails, the Malay must support PAS".

UMNO translate to national stability and it is the historical umbilical cord for continuity to link the past to the present and moving forward to the future. The moment UMNO lost power country was in disarray.

For peace, stability and prosperity of the country, the traditional Malay character of the country and Islamic tradition of ahlil sunnah wal jamaah should be strongly upheld as it provides the base for tolerance and acceptance to the existence of other races and faiths.

The best vehicle to preserve the inherited culture, tradition and practises of Malay and Muslims lies with preserving UMNO. Other political parties were at one period or another compromised by multiculturalism, liberalism, and imported political ideologies and doctrines.

UMNO had been the bastion of Malay politics. All major political parties in Malaysia has its origin and linked to UMNO history. PAS came from the breakaway group from UMNO's first general assembly in Muar. So was Parti Negara, Semangat 46 and PKR.

PAS have emerging leadership talents, but it is still not numerically sufficient and experience wise to fulfill the positions at national level.

The experience of 22 months of PH leadership was a sample of PAS leadership talent in the form of Amanah. PAS need to be nurtured and elevated from state level leadership.

The return of PAS into a coalition of UMNO will elevate them from their check and balance role as opposition to complimentary role to their former partner in the early 1970s BN coalition.

The name Perikatan and Nasional signify the UMNO transition from Perikatan to BN. 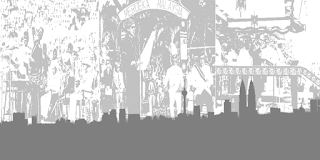 As happened to the Incas by Spanish colonialist, the strategy of every colonialist is to economically marginalise and subsequently socially and politically weaken the original inhabitants of any land.

In addition, the would dismantle the social, economic and political system to meet their colonial capitalist purpose.

The European colonial master of Malaya and the Borneo states did that by bringing cheap immigrant labour to work for them. When Malaya and subsequently Sabah and Sarawak received its "independence", the immigrants they left behind became a time bomb that could implode to destabilise the nation.

The experience of GE 12, 13 and 14 saw the infusion of foreign backed subversive elements manipulating, instigating and igniting divisions within society by imploding on the time bomb left by the colonial masters, and creating ideological and sectarian divisions within the Malay Muslim community and country at large.

The fronts of their attack were to secularise the country away from Islam, reduce role of monarchy towards a republic, abolish Bumiputera status, abolish the syariah legal system and introduce human rights over god's right as the new norm on all aspect of life.

In all aspects, Mahathir and his family members participated by deception and now openly to destroy the Malay Muslims socially, economically and politically over a span of 50 years.

The fall of BN was god's blessing and an eye opener for PAS to embrace its old political competitor and partner for the sake of the Malay Muslims unity and national stability.

It maybe seen as old school or repeating old cliche to the new voters, but it is imperative on the survival of the Malay Muslim community from these various threats to preserve UMNO and maintain its dominant roles.

To achieve the acceptance of the community, UMNO itself has to undertake its own self rejuvenation to emulate PAS by bringing up new leaders and do away with the old warlords. The leaders must voluntarily prepare a succession plan that is not self serving and execute it.

UMNO members must discard the dependent mentality and insensible idolising of leaders. They should adopt the attitude that leaders come and go, but UMNO must move on. It need to shed the culture of idolising leaders from Mahathir era that led to its self destruction.

UMNO should take up the leadership to encourage positive politics and attract the millions of Malays that have yet to register as voters and participate in the political process. 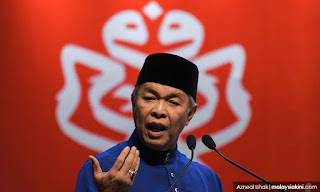 It is speculated that Zahid Hamidi may be facing a leadership challenge in the upcoming party election, but undoubtedly, his role during the most trying times of UMNO's more than 60 years existence should be given high regards.

He managed to steer UMNO out of the most challenging phase it ever undergone despite the personal criticism and legal threat made against him.

Recently, it was wise of him to remind and urge members not to emulate the PH bad habits to quarrel over the PM position that subsequently led to their lost of power.

Zahid's willingness to participate in the Sheraton move initiated by others, which superceded the authority of the President, was a selfless act.

He took priority to save the Malays, Bumiputera and Malaysians at large from the cruel and ruthless policies of DAP controlled administration than his personal ego.

His commendable sacrifice should be emulated by other UMNO old leaders to pass the baton peacefully and willingly. Mahathir may still be around in Parliament but he too has lost it. The world has changed dramatically due to technology and more so post pandemic.

Country need new leaders with new ideas, and new visions willing to embrace the new paradigm while at the same time, preserve the cultural tradition and heritage.

Zahid's current challenge will be to preserve UMNO and gather the leaders to be purposeful in its mindset, actions and position.

The pillar of UMNO strength and always the unsung heroine is Wanita. It needs to be guided and reignite to its past glories and strength under the new phase of leadership.

The youth wings must be revived into an active and vibrant organisation with vigour and strength.

A very sensible advice to ALL Umno leaders and members. The paradigm shift suggested is very enlightening and crucial to ensure Umno remains relevant and a powerful vehicle to ensure Malay and Muslim survival in this Muslim nation, Malaysia. The 22 months of Dap-directed PH rule clearly exposed the danger facing the Malay Muslim community if and when the country is governed by non-Muslim non-Malays and the liberal Malays.Bersatu and Mahyuddin should understand why Umno should be the dominant and determining leader in any political pact, more so when Bersatu is the smallest party without any significant grassroot support.