Railway union up in arms as KTMB awaits new Chairman 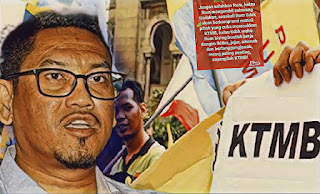 At the end of February, media reported the recently removed Menteri Besar of Perak, Dato Seri Ahmad Faizal Azumu was tipped to be the new Chairman of Keretapi Tanak Melayu Berhad (KTMB) to replace Dato Rameli Musa.
However, no formal announcement has yet to be made. The official Facebook for the Railwaymen Union of Malaya (RUM) asked on March 6th as to why Faizal has yet to to accept his appointment. Faizal told media he will be meeting Prime Minister Tan Sri Muhyiddin to discuss the appointment.
For Faizal, or casually referred to in the political circle as Peja, he may have the Prime Minister's ear, but he does not exude the confidence to provide the leadership to overcome KTMB's dramatic drop in revenue, rising liabilities, and even late salaries paid.
Peja's appointment is seen by political pundits as Muhyiddin pacifying his Deputy President, who was removed as Menteri Besar at the behest of the Sultan of Perak. He was suspected of blatant involvement in the rampant sales of state land, but there is no such opportunity in KTMB since it holds no land or rail assets.
He will also have to content with RUM, a union known for being aggressive but short of militant. The union is vehemently opposed to the new CEO appointed by Minister Dato Dr Wee Ka Siong, against Destini-KTMB JV to do MRO, and up in arms with MoT's preference for China's CRRC.
Their issues are not without basis. The union suspect common benefit in deals involving CRRC, which has such reputation. Their worry is the worst case senario of KTMB assets being sold to the China giant.
RUM facebook claimed a China contractor hired by MoT failed to deliver rolling stocks and resulted in more losses for the bleeding KTMB. Wee does not fair well with the union.
Destini 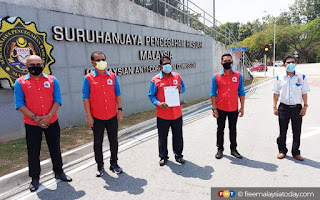 The union's main concern with the Destini JV is the dim propect of KTMB workers being laid off. They are suspecting hanky panky behind the 70:30 equity arrangement favouring Destini. Slightly more than a week before notice for the AGM sent out, union made report to MACC.
Destini has always been associated with UMNO Perlis leader, Dato Rozabil Abdul Rahman. The C4 Center website linked him with Dato Shahidan Kassim, but within UMNO circle, he is oftenly associated with Khairy Jamaluddin. During their Pemuda days, he was KJ's Treasurer for Pemuda and dubbed as his moneyman.
Despite politically linked and the long list of contracts from government and agencies, Destini is a public listed company. To quote the company website here, it "provides integrated  engineering solutions and has big interests in the aviation, marine, land systems and oil and gas sectors".
Rozabil insisted investors to not look at his political link, but judge his track record. It will be difficult because recently his name turned up in the company that won the RM1.16 billion Immigration IT contract which was linked to PM's son-in-law. Despite rumours he was selling out of Destini after BN's lost in the 14th general election, Rozabil explained in a 2018 interview that he was seeking for fresh capital.
It is quite apparent that the long list of projects does not come with healthy cashflow. Destini had long being known in the market to be tight on cash. And, its financial standing was one of the issue raised by RUM to oppose the JV. 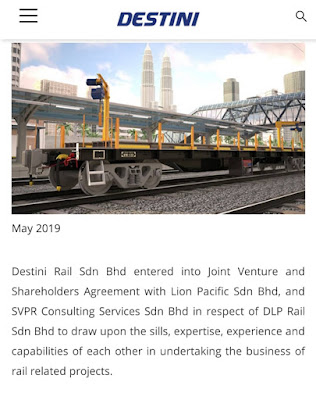 To the rail workers, Destini does not offer confidence as having the technical capacity and experience in rail work. Their only work in rail was a 2016 contract to supply RM62 million worth of 35 motor trolleys and two rail road vehicles delivered in 2019.
Since 2018, Destini have been bidding for the MRO job, but their capability to do MRO is only a technical collaboration through a JV company. Sources claimed there are other better local contractors with longer track record and specilised skill in rail related work than Destini. There is a local company with the capability to win international bid against CRRC.
Destini is essentially doing contract broking like any power broker in a political party.
CEO and Chairman 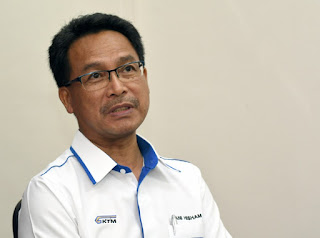 While, the union's pick on the new CEO, Rani bin Shamsuddin was the fishy nature he was brought in by MoT to before CEO Datuk Kamaruzzaman Zainal's tenure expired.
KTM has a history of internal politicking leading to frequent change of its CEO. Rani is a reappointment as he had served in the position before from September 2017 till September 2019.
Rani's reputation does not auger well with the union. He was deemed as ineffective in resolving problems with the first Klang Valley Double Tracking project by Syarikat Dhaya Maju LTAT Sdn Bhd. Recently, there was a mishap in Shah Alam.
Last year, the union petitioned Muhyiddin to block his reappointment, but Rani appointment stays as he was  acceptable and willing participant to Wee's China plan. The Phillipines Railway Board recently cancelled three DMU contract given to CRRC. This led union to worry should MoT insist to fulfill the need for new cargo trains with orders from CRRC.
Rani tend kow tow to Ministers. Had it not for Covid pandemic restrictions, RUM would have organied a picket against him. Now that Rani has returned, RUM made it known that he is expected to stand up against any interference from MoT on the new diesel locomotive purchase.
As for Peja, he has yet to confirm accepting the Chairmanship, but already the union gave a stern warning to keep politics out of KTMB.
Peja gave an excuse that he wish to focus on election preparation, but words are he will only accept on condition MoT also appoint him as Chairman of the KTMB asset manager, Railway Assets Corporation (RAC). Wee would likely keep it for someone from MCA.
KTMB is a wholly owned company of the Minister of Finance Inc under auspices of the Finance Ministry (MoF). However, the train and rail operation is regulated by MoT. The corporatisation exercise, after the Railway Act 1991 took effect, involved placing the asset into RAC, a statutory body under MoT.
There was a proposal to merge RAC and KTMB as it was crucial and strategic to do so. KTMB losses and operational problems is mainly attributed to the inability to make decision on the asset and the 1992 restructuring. Even the union is agreeable to the merger or putting all under a holding company.
More so, Malaysia need to urgently uplift its rail system or face run the risk of economically being left behind to its neighbours. Unfortunately, Wee already denied of any such plans in June last year.  The idea was already shot down.
With egos at loggerhead and no clear political will to revamp KTMB operations, it looks to be an insurmountable task to turnaround KTMB and uplift this 160 year rail transport system. And, Faizal may not be the right person to lead the task.
* Edited 15/3/2021 7:30 AM
at 3/14/2021 03:21:00 PM