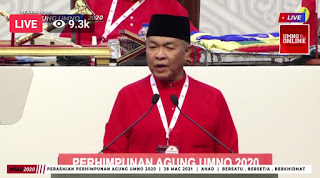 The underlying reason behind UMNO's decision to go alone was lost to the "garang" undertone and overemphasis on politics and 15th General Election by the speakers at the UMNO General Assembly.

Since losing GE14, the General Assembly is no more the platform to set the direction for the Malays and nation. And since Pak Lah's Presidency, the opening address stopped playing the role as agenda setting for the Malays.

More so, the pandemic limit any role the GA could play.

This opened UMNO to a possibly PM Office funded counter attack, in the form of a PAS supporting University lecturer and a new intellectual group replacing National Professorial Council.

It was manipulated to give a negative perception of UMNO.

The lecturer either failed or refused to understand the reasons UMNO is taking its own course of action as endorsed by the UMNO General Assembly.

Or it is not far from impossible he was assigned to find fault and nit pic on Zahid's speech and create riff between UMNO and PAS in Muafakat Nasional.

The crux to the problem beseiging Malaysia presently is casually well articulated by former Minister of Finance II and Division Chief of UMNO Titiwangsa, Dato Johari Ghani in his speech.

The fall of Barisan Nasional government was replaced by a smallish party leading the marriage of convenience Pakatan Harapan government and consequently the stop gap coalition government inaccurately dubbed as Perikatan Nasional.

It resulted in debilitating political instability.

Political stability had been the bedrock of Malaysia's development post independence. It enabled the country to grow its annual economic size from RM57 billion in the 80s to RM1.4 trillion in 2017.

To counter sceptics to such claim, Johari argued other countries that gain independence earlier than Malaysia but failed to achieve such phenomenal growth due to political instability.

It was also political stability and existence of leadership that enabled Malaysia to repeatedly weather the storms of financial crises such as the late 90s currency crisis and 2013 commodity crisis.

Through all these, BN was steering the country. It was able to do because it has an anchor party in UMNO, which represented the majority race in the country, as the stabilising factor.

In the absence of UMNO, there was no political stability.

The more dominant political parties with differing ideologies than PPBM exerted influence that resulted in a loss of confidence from unclear direction of government which discouraged FDI, caused financial market crash, and destructive economic restructuring.

The leading party was not sufficiently influential to put together a cohesive policy for PH government and provide an economic direction for the country.

Under the PN government, more of the same due to weak and incompetent anchor party.

Foreign investors negatively saw the suspension of Parliament and the institution of emergency as degradation of democrasy and signs of political turmoil.

The common excuse given was the Corona Covid 19 pandemic. However, other neighbouring countries facing worse pandemic were attracting large FDI.

Malaysia was instead facing regular streams of divestment, massive loss of jobs, and unemployment about to reach 1 million.

Government seemed clueless and hesitant to anticipate and act decisively on the looming economic crisis from the Covid lockdown.

Without a political anchor, the present government failed to plan and put together the 12th Malaysia Plan as the economic strategy before presenting the annual budget and for investors to identify with Malaysia.

The solution Johari puts it is to get Parliament seating again and call for a general election to seek the mandate of the people. BN should win and regain political dominance to spearhead and stabilise the country.

Absence of sincerity and honesty

It is unfortunate that the political science lecturer was too obssessed with "the scheme of things" that he failed to understand the economic big picture that will determine the future political, social, security and sovereignty of the country.

The political scientist was too enthralled in his partisanship and could be assigned to nitpick on the political chronology and intrigue in the opening speech by Zahid.

Zahid is seeking the endorsement of UMNO GA to the decision by significant majority of Divisions and Supreme Council to severe ties with PPBM.

The lecturer oversimplified his understanding by criticising UMNO as power crazy, arrogant, divisive and insufficiently thought out move to split ways from PPBM and PN for the 15th General Election.

Which political party in the world is not in pursuit of power?

Why is PPBM, a smallish party deficient in leadership talents leading the nation and without peoples' mandate, insisted to hold on to the mantle of national leadership and evading the motion for vote of no confidence in Parliment, not called power crazy?

The insufficient mandate is glaring with PPBM having only 7 Member of Parliament, the balance made up of "frogs", and MPs either bought over or by threat to leave their party to join.

The key and critical positions in government are held by PPBM. The UMNO with more MPs are called power crazy?

Why would UMNO be called arrogant when it gave in to PPBM to hold the Prime Ministership for the coalition to replace PH?

And, UMNO was clear from the onset that they are supporting the new coalition for the sake of national stability with the condition a general election is to be called by January 2021 to get new mandate from the people.

The power crazy PPBM was insincere and dishonest to abuse the pandemic as excuse to postphone Parliament and renegade on the promise to stabilise politics with a general election.

Najib disputed it require state constitutional amendment for a "federal list" item in the constitution not on the "state list".

The divisive accusation using Perpaduan Ummah was well answered by Dato Mohamed Hassan in his speech at the party wings' opening ceremony.

Zahid's speech in his opening address is a far more serious tone than he ever was.

Zahid received endorsement for UMNO to go separate way from PPBM, and the motion to empower the President and Supreme Council to direct UMNO cabinet members to pull out from government was accepted.

It looks like he mean business this time as he challenged Tan Sri Annuar Musa to resign.

Mohamed Hassan reminded him not to "acah-acah" (merely threatening) any more. Tengku Razaleigh, who called on Ministers to pull out last month, seemed pleased.

How will the never say die Anwar Musa, elusive Dato Hishamuddin Hussein, the booed out Dato Shahidan Kassim and "Kluster Menteri" react to the eventual decision?

The PN government has a shelf life till early August but the defiant Publika gang PAS Minister, Dato Takiyuddin Hassan said Parliament will be in session in 6 months time.

Will they have time to manipulate the pandemic wave to rise again with the Council of Malay Rulers should be meeting any day soon?