"Your Mission A Voice, should you choose to accept it .... This tape will self-destruct"

Returning to our car after breakfast at the neighbourhood eatery, "Mak O Mak" on a restful Sunday, a Little Bird left a message placed in an envelope written "OPEN IMMEDIATELY" on the car windshield wiper.

Inside the envelop is a message instructing to pick up a parcel placed under the car at the inner side of the back right tyre. The parcel contained an audio CD playing device. Immediately rush to a nearby park to find a bench at a quiet spot. Upon sitting, we pressed the ON and PLAY button to hear the electronically muzzled voice of Little Bird to disguise his or possibly her identity.

Birdie went at length on an insider trading exploits of a Minister of Finance that was investigated by the Securities Commission (SC) and it was prosecutable. It came with photos and an instruction to have it burned after memorising the face.

The assignment is to be a trumpet playing whistleblower. It ended with "Should you or any of your associate be caught or killed, Little Bird will disavow any knowledge of your actions" Immediately, the CD player went into flame and photos thrown on top as it burns into ashes within minutes.

Damn! Its like in the 60s TV series. This mission has to be carried out and be done delicately... 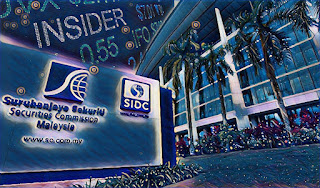 The Minister of Finance as told by the electronically savvy Little Bird could be from the past, previous or present. The identity is withheld but the happening is in 2018.

The investigation by SC on the Minister was done in 2018 involving three cases of insider trading on the shares of companies codenamed as Samajwardi Party Loyalist, Wind Exchange and Atom Component. The Investigating Officer suggested to charge, but by middle of 2019, SC decided to close the case.

The officer-in-charge of prosecuting that cancelled the prosecution received a promotion. Name will not be disclose but codenamed as Rosebud. Name taken from Orson Welles's classic film, Citizen Kane. 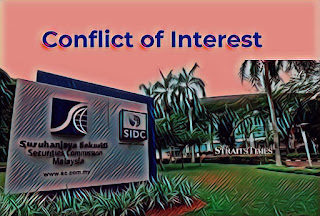 There is a principle in Chinese geomancy based on inseparable and contradictory opposities such as dark-light, male-female and old-young. This involves a Chinese-named PLC codenamed Son of Female Energy (SOFE).

There is conflict of interest involving the Minister, SC Chairman, and codenamed corporate personality Dato Carp, a member of the SC Board of Director and his company codenamed Betel Nut. There was a 10% private placement of SOFE announced in 2013 to Dato Carp. He then put the shares as collateral to Betel Nut.

The Minister's Mother and the SC Chairman's daughter are members of the Board of Directors of SOFE. A former media kingpin during Mahathir's administration raised this issue in April 2020.

He was concerned with alleged tax evasion from 2010 to 2017. Two partners of a tax consulting firm found the evasion. Instead of regularising, they paid off the other three partner. It then got complicated.

Actually, there is more to the story. The conflict of interest involving family is obvious, but SC approval of a transaction involving a member of the SC Board of Director constitute a larger offense.

It means Dato Carp was also a partner with the son of a former Prime Minister. Later he became a partner in an oil and gas company and SOFE too. The big money in all the dealing came from a financial institution linked to Atom Component.

Inextricably, the Minister is in one way or another linked to the former Prime Minister.

Other than Tengku Razaleigh Hamzah. all Minister of Finance I or II are directly or through single or two layered linked to the leader social media prayed recently that opening the roof make the passage easier.

This information is not as relevant for the Minister, past or present as the conflict of interest and corruption happening within SC. It has been too often heard and prevalent from the time of Ranjit Singh and to the present.

The timing to disclose is bad because a group of four young people made a MACC report of corruption and mismanagement in the tune of RM28.2 million. As often the case, MACC issued a response to express commitment to investigate.

Unfortunately, it will be misconstrued as MACC applying pressure or threatening on SC whose responsible to investigate Tan Sri Azam Baki's claim that his brother was the beneficial owner of shares worth RM500,000 to RM700,000 back in 2016. Dato Wan Junaidi said it was merely RM330,000.

It is frankly pittance when compared to the holding of friends in the civil service trading shares back since the 90s. Since it involves the Chief Commissioner of MACC, and DAP and left leaning NGOs  orchestrating a propaganda, it blew out of proportion and into non-sensical territory.

SC is laden with DAP and PH supporters. Can they be relied on to be fair and just?

Section 25 and 29 of the Securities Industry Act (Central Depository System) 1991 has amendments made in 1998. It render the case precedent of Surinder Jessy and V Kanesan in 2011 as not in accordance with MalaysiaNow straight forward interpretation of proxy not allowed.

Sources claimed the stockbroking company and Azam Baki have not been seek for statement by SC. Its a spin by the notorius portal.

The devil is in the details. Specific provisions of law take precedents over general provisions. The few days episode is ridiculous and laughable to owners of stockbroking companies.