The Silence of the Lims: Siti Zainab, Vincent Tan and Lee Kim Yew 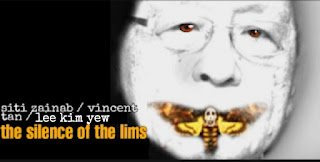 Lim Kit Siang been berating on MACC to pursue Chief Commissioner, Tan Sri Azam Baki. It is typical him to ignore inconsistency to shove the market with his controversial ice cream flavour of the day.
Since associating with Tun Dr Mahathir, Kit Siang stopped talking on RM32 billion BNM forex loss. There is a long list of Mahathir's alleged mismanagement and plundering he conveniently turned silent on. Recently, not a pin drop heard on Zeti family's money laundering of 1MDB money.
Conveniently, he went completely mum on the court revelation by star witness, Consortium Zenith BUCG Sdn Bhd director Zarul Ahmad Mohd Zulkifli that Lim Guan Eng asked for a 10% cut of the profits from the undersea tunnel project.
Ironically, Kit Siang and Guan Eng's lawyer, Gobind Singh are creating a ruckus over Azam. Its as though DAP is still the doyen for fighting corruption. More revenge on the person responsible for investigating Guan Eng.
Gobind repeated his call against Azam in Parliament yesterday. So, the need to reveal a new expose on a close associate of DAP, the  Solicitor General II, Dato Siti Zainab bin Omar.
Another involves Tan Sri Vincent Tan allegedly collaborating to secure another 5G network license. Lastly, Tan Sri Lee Kim Yew who needs to get his head re-examined again.
Dato Siti Zainab Omar 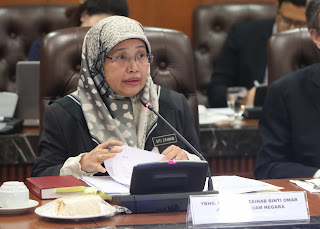 Siti Zainab served as SG II to the openly declared Attorney General for Pakatan Harapan, Tommy Thomas.
According to sources within the legal circle, the ambitous and opportunistic civil servant is a renown bootlicker. She was blandishing from Tan Sri Gani Patail to Tan Sri Apandi and even Tommy Thomas with flattery words to get herself up the ladder.
And, it is known today she has not given up to kowtow to Dato Rosli Dahalan with the hope Tan Sri Muhyiddin Yassin's personal lawyer is made Attorney General.
It is an open secret that she was a willing accomplice of Tony Pua. Malaysia Today wrote of Tony Pua bypassing then SG, Engku Faiza to deal with her in March 2020. Did she collaborate to assist Tommy in his abuse of power?
Siti Zainab missed the boat for Solicitor General in 2020, but was it due to her close association with Tommy Thomas and the holy Pua?
The document below came our way recently: 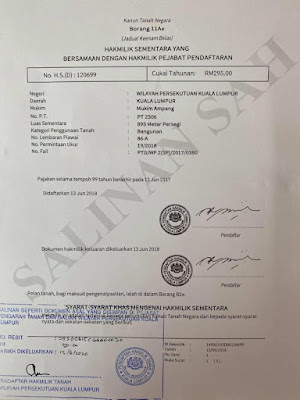 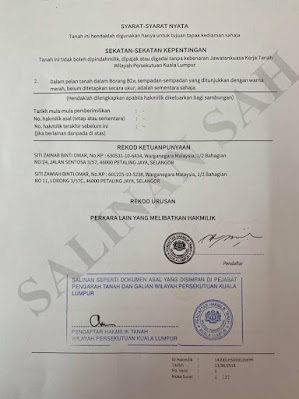 It shows a temporary land title to Siti Zainab and her sister, a University Malaya medical Professor in Mukim Ampang, Kuala Lumpur dated 2018 issued by the Federal Land Commision.
At the material time, she is believed to be a member of the Federal Committee for Land and Mineral. It is clearly a conflict of interest and violation under civil service standing order. As SG II, it is impossible she not know it is wrong.
Presently, she is still SG II and recently appointed new Chairman and Director General of the Labuan Financial Services Authority.
But, why Kit Siang is silent and not demanding RCI or at least an investigation?
Tan Sri Vincent Tan
Recently, government been receiving a lot of flak on the 5G rolled out by Digital Nasional Berhad (DNB).
There have been many accusations and prejudicial presumptions made from all sides of the political divides, which are not economically and financially true.
PH, which include DAP, took the stand in October that the implementation of 5G is risky. And, strangely monopoly by government was became an issue.
Its an about turn from Kit Siang's opposition to privatisation decades ago. Another 5G network only serve the rent seekers of Tan Sri Vincent Tan and Maxis new Chairman, Tan Sri Mokhzani.
It is no secret Guan Eng is close to Tan Sri Danny Tan, the brother to Vincent. The urban legend is he was the first to send congratulatory bouquet of flower to the Chief Minister office the year DAP gained control of Penang. 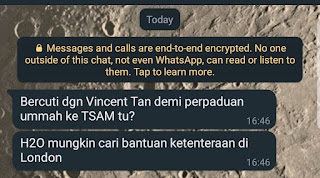 During the latest public uproar over Ministers going on holiday in the midst of massive flood affecting eight states including Kuala Lumpur, a message went viral of Vincent going on holiday with Minister for Communication and Multimedia Minister, Tan Sri Annuar Musa. 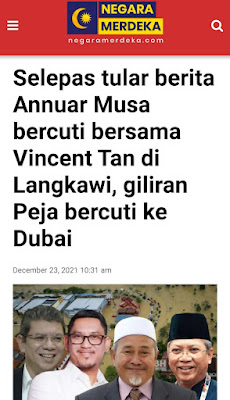 A portal reported it also. 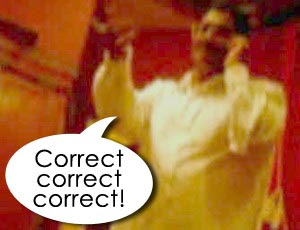 There is nothing wrong with Vincent having meeting and holding discussion with Annuar. But the alleged holiday is a revisit of the Correct! Correct! Correct! episode.
True or false, it is beside the point because it is openly known that Mahathir faction of telcos wants a 5G network for themselves.
The outburst of Annuar's Deputy in Parliament is rather strange. He openly vented out against government announced plan to hit his former boss and still member of the cabinet.
It would usually get Kit Siang suspicious. His website admin would be putting up ultra long titled update on the issue. This time he did not immediately come out blazing with accusation of alleged collusion for kickback.
The industry have been talking of the Ministry manouvering a U turn to push for another 5G network and license. It would be counter productive to DNB and a repeat of past mistakes from the early days of privatisation. 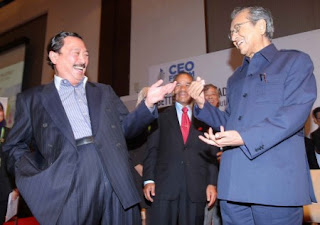 In case Vincent's name slipped off Kit Siang's mind, a FB status by Lim Sian See in 2017 should refresh his failing memory and numbing lips, below:

Not many people realize the extent of Mahathir and Vincent Tan's business ties which includes:
- 4D license,
- Sports Toto license
- renting 70 acres of DBKL land at Kiara for 70 years for  annual quit-rent and rental of RM291,000 per year.
- renting out the Desa waterpark land for 30 years
- allowed to build his Bukit Tinggi resort on 16,000 acres of land
- Giving him 500 slot machine licenses
- Awarding him a 20 years monopoly on sports betting for a bargain price without tender or approval
- Selling Pantai Hospitals to his son, Mokzaini.
- Vincent Tan's brother selling Diperdana Corp to Mirzan
Mahathir also privatized the KL Monorail to Vincent Tan then bailed it out when failed.
Mahathir also privatized our sewerage system to Vincent Tan using Indah Water and then bailed it out when failed.
Privatizing Klang River: http://www.wsj.com/articles/SB836422349403405500
In fact, Mahathir actually privatized our Klang River to Vincent Tan and his partner David Chew for 99 years to build the 10 million square feet KL Linear City.
Yes, our shit water and rivers were privatized by Mahathir to Vincent Tan. 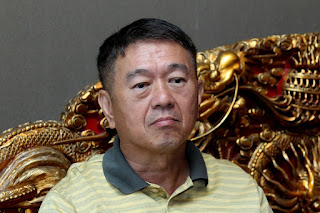 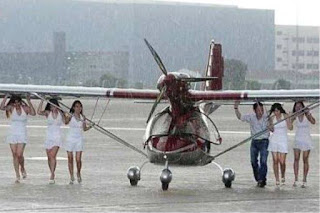 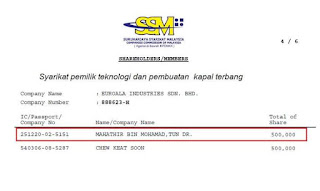 Later on Mahathir and David Chew formed a 50-50 JV company which brought out all the rights and production of an Italian light-aircraft company to form Euroala Industries. 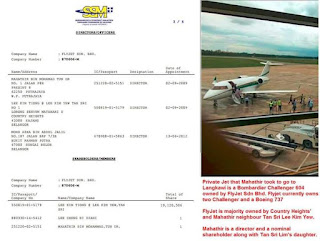 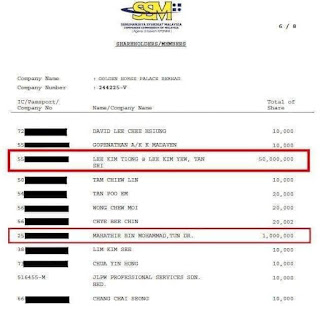 At present time, Mahathir is also recorded still recorded as a shareholder of the Palace of the Golden Horses 5-star hotel. *

Not bad, even though conflict of interests are all over the place and Mahathir essentially tried to privatize almost everything to his close friends.
Currently, there is now a list of 488 companies in Malaysia which Mahathir's family (him, his 3 sons and his daughter) has interests in being spread around on social-media. That's one giler long list.
But somehow still not enough to pay the monthly salaries of his personal cook and maid - forcing him to let them leave.

* Apparently, Palace of Golden Horses have been sold to a Glove maker and turned into Covid quarantine centre. Kim Yew is struggling against Banks. And he is psychologically disturbed by his financial situation.

Kit Siang and DAP is usually handy and quick to use inconsistency and hypocrasy as their political argument and storyline.
Perhaps, it is advantageous to remain silent on Kim Yew for fear the message from WCEF would lead DAP to perform poorly in the next GE15.
Judging from the open resentment of the Chinese community towards Tony Pua, businessmen towards Guan Eng, and the two KOs in Melaka and Sarawak, DAP is surely on a downhill slide.

If so, Kit Siang should not be repeating like a old lady with dementia in his continued attack on MACC.
He has done his part to use Dr Edmund Terence Gomez as political stooge to create sensation by resigning from one of the committee in MACC. 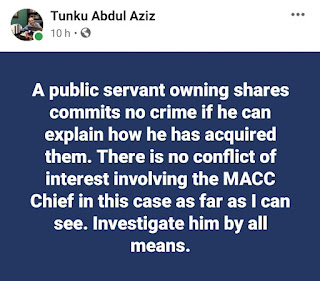 As FBer Salahuddin Hisham pointed out, there is no real offense allegedly made and its without specific wrongdoings. So did former Transparency International Malaysia Chairman, Tunku Aziz claimed.
Heaven! It is a 25 sen PLC and bulk of his holding is in minisculed valued warrants (as in not shares but rights to buy shares).
Edmund pulled a Bollywood act based on a website of unknown origin and credential. Read up Part 1 and Part 2 used as excuse in his resignation letter.
Is it another political stunt to accuse, but left for MACC to investigate, to their satisfied outcome?
Tan Sri Zahar Ujang announced yesterday that Azam will end his silence tomorrow. He has to explain whether it is Bumi special issue, how it was financed, and bought and sold.
If it is an unsatisfctory explanation, only then one demand for investigation, dearest Ibrahim Ali and Puad Zarkashi.
Even BossKu agreed that Unker Lim should answer for other more controversial issues instead of ranting on Azam at repeated dimentia-tic proportion.
It was Azam who investigated on Najib's SRC case. So when will Unker end his silence?
at 1/04/2022 10:58:00 AM