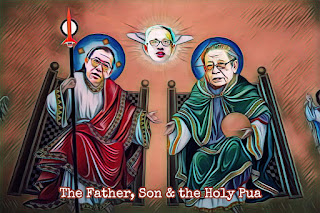 When told two years ago that DAP days are numbered, no political pundits would believed Chinese business community are bitter with Lim Guan Eng and Tony Pua.

Tony Pua was not booed at the Chinese ghost festival few years for no reason. When Guan Eng was heading MOF, the tip-off on their Publika outfit was not plucked from thin air. So was the use of IRD to harass and extort Chinese businessmen.

Joceline Tan continued her Christmas Day column, "Can DAP undo the 'dead knot' before GE15?" with another one related to DAP yesterday Saturday.

This time is about the recent World Chinese Economic Forum held in Kuala Lumpur. There is the expected reaction to the presence of Dato Najib, who recently lost in his SRC appeal at the Court of Appeal, to deliver the keynote speech.

One Professor interpreted it as a slap in the face of judiciary by China. While FBer RF Lias elaborated Mahathir's faults for making Malaysia unattractive for FDI. Malaysia Chronicle titled Joceline's column with a long alarmist title of Najib making a political comeback by reaching out to Chinese.

He is far from making any possible comeback at the moment. That is diverting attention from the political reality facing DAP.

Towards the end of her column, she quoted Jeff Ooi:

“We are at a political crossroads. The Chinese sectoral warlords are staking the landscape to woo Beijing. There’s rivalry to provide the platform for China investments in the near future,” said DAP politician and newspaper columnist Jeff Ooi.

She ended to touch on the fate of DAP with the final words:

“Ricebowl issues are at the forefront while Chinese businessmen are looking at who can best provide political stability and recover the economy,” said the above advisor to the Chinese school association.

Najib's storm in a Chinese teacup 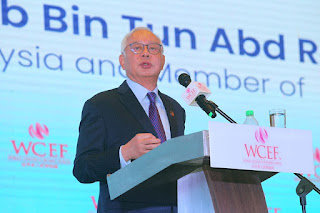 As far as the chattering class was concerned, there were too many things wrong with that.

Najib, they said, had been convicted for graft, never mind that he is appealing the decision.

An outraged DAP leader wondered why the “most glamorous financial convict in the world” was invited to the event.

Moreover, Najib’s government fell largely because of the Chinese tsunami. Should he, as such, be speaking at a Chinese conference?

These are valid questions. But the Chinese tsunami has receded and, just for the sake of argument, isn’t Pakatan Harapan’s prime minister candidate also a convicted person?

The pot is all too fond of calling the kettle black.

Anyway, the rumbling did not end with the event. Property tycoon Tan Sri Lee Kim Yew, whose name is synonymous with the Palace of the Golden Horses Hotel, kicked up a fuss, calling it a “huge embarrassment”.

Then, following an internal dispute among the organisers and sponsors, it became the Global Chinese Economic and Technology Summit (GCETS).

Lee had nothing to do with the event Najib opened. As such, he was justifiably indignant that another organisation had “hijacked” the original event name and caused his friends to think he had invited Najib.

Moreover, GCETS, of which Lee is patron, held its annual summit at a beach hotel in Penang a week earlier. It was far grander, with bigshot guests as well as a video message from the Prime Minister but it appears to have been totally eclipsed by the Najib event.

Kleptocrat, convicted criminal or whatever one might call him, Najib sensed the time had come to reach out to the Chinese.

“Najib wants to rehabilitate and detox his image. He is trying to frame his makeover based on his economic record as PM,” said political commentator Ivanpal S. Grewal.

Najib used the WCEF platform to remind the Chinese that he had created the environment for them to invest and do business, he defended the policies that made it easier for China-Malaysia business synergies and rebutted claims that he was selling Malaysia to China when he was prime minister.

He is a friend of China whereas China-Malaysia ties were at its worst during the second premiership of Tun Dr Mahathir Mohamad and have yet to recover.

“He also launched a full frontal attack on Dr Mahathir. In doing so, he was telling his audience that he is not trapped in the way that Dr Mahathir sees China and the world, where Malays are always portrayed as victims,” said Ivanpal.

Going for Dr Mahathir that way was rather below the belt but the elder man had done worse to Najib. The subtext to the critique is that the Chinese business community can now compare what he and Dr Mahathir did for them.

“If you speak to Chinese business people today, many of them will admit Najib was the most Chinese-friendly PM,” said an advisor to a Chinese school association.

Najib then took to Facebook to poke at his critic Lee, highlighting the tycoon’s cosy ties with Dr Mahathir with documents showing that the pair are business partners.

Lee, a high-flyer in the 1990s, makes no secret of his devotion to Dr Mahathir.

His daughter, together with Dr Mahathir’s eldest granddaughter, were responsible for that painfully hagiographic documentary film, "M for Malaysia".

Being a friend of the former premier surely helped and Lee was a high-flyer in the 1990s. He runs the private jet outfit Flyjet Sdn Bhd and was the first person in the country to own a private Boeing 737. Beneath his aggressive business style, he is well-versed in Chinese literature and is good at Chinese calligraphy.

He founded the global Chinese platform with the aim of connecting the Chinese diaspora although the industry gossip is that the string of awards for lifetime achievement, entrepreneur of the year and so on, that are presented at these conferences come with a price.

Lee referred to his brainchild as “zhong xi xiang xue xi” - east and west learning from each other.

“He is a remarkable man. He was a powerful political interlocutor at one point in time but he faced tax problems when Najib was the PM and he took it badly,” said Ivanpal.

The event that Najib spoke at was organised by the International Strategy Institute, a rival organisation whose chairman is Cheah Cyuan Yong.

Cheah is a businessman from Bukit Mertajam where he goes by the nickname “fei chai,” which means “fat boy” in Cantonese.

He has a rather colourful history if what is written about him on the Internet is to be believed.

The flurry of opinions over two rival groups representing the Chinese economic agenda is a sign of the times.

“We are at a political crossroads. The Chinese sectoral warlords are staking the landscape to woo Beijing. There’s rivalry to provide the platform for China investments in the near future,” said DAP politician and newspaper columnist Jeff Ooi.

The business sector has been badly battered. There has not been a day of political stability since 2018. Then came the pandemic and now there are the floods.

The Chinese business community has been sending out mixed signals for quite a while.

The next general election is not going to be determined by 1MDB or corruption issues.

“Ricebowl issues are at the forefront while Chinese businessmen are looking at who can best provide political stability and recover the economy,” said the above advisor to the Chinese school association.

The "Cina bukit" diehard will stick with DAP. However, its pointless for DAP to repeat their usual routine of racial and religious instigation before GE15.

The son and the holy Pua not only been selling national assets and destroying financial institution linked to Bumiputera, they have been on a socialist crusade against businessmen.

Tony Pua carries a prejudice that all businessmen, especially the successfully rich, as tax evaders.

The recent prosperity tax announced by Tengku Zafrul at the recent tabling of budget was planned by Lim Guan Eng and Tony Pua. DAP imposed the condition on Ismail Sabri as prerequisite for the PH-PN political MOU.

Zafrul is seen as unpopular and the move will hinge on Ismail's popularity, more so the overstretched respurces handling the flood. Few Chinese hongs are aware of it.

After the poor showings in Melaka and Sarawak together with an exodus of leaders and wakil rakyat out of DAP Sabah, the glory days of DAP looks over.

Guan Eng and Tony Pua have too many enemies and aggrieved victims. They will not know what will hit them next. No attempt of revenge could save them.

If the Lims with Guan Eng's tunnel case are out in the open insist to hold on to power, DAP.days are numbered.