Has the MySejahtera data leaked?

That was Minister of Health, Khairy Jamaluddin in Parliament at the end of March explaining MySejahtera data belongs to the government and KPI Soft or now known as Entomo, the system developer is primarily doing system maintainance.
He went on to ensure the personal data is safe and National Security Council has signed an agreement with KPI Soft for non-disclosure agreement (NDA).
At around early April, this blogger was introduced to a young man looking for assistance to sell a data base. If memory did not fail us, the data size is close to 50 Gigabyte. However, to do the search on the data, it required a good system and the best laptop still endure few hours of wait.
He demonstrated its ability to get some names of some known person. The data disclosed was basic but more detail could be available. At 50 sen per individual person of information, the data for 40 million population should cost at least RM20 million.
However, that is all to it. The young man did not gave us much to work on except spurts of saliva.
It was left in the back burner and even misplaced his contact number till a Facebooker recently raised the issue here that Khairy's career will end should MySejahtera data leak.
There can be many other possibilities, but did the young man have access to leaked MySejahtera data?
A source claimed MySejahtera data is stored on China-owned Ali Baba system. 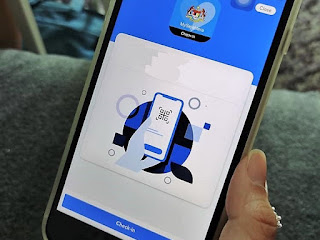 The MySejahtera system has access to all the name, IC no., handphone number, address, and Covid related records. In possession of Chinese, its a security concern.
To those able to utilise the data, its value is certainly more than 50 sen per name.
Nevertheless, Khairy answered questions from the press on the ownership of MySejahtera on March 28th. Video below:
He and Tengku Zafrol attended the PAC enquiry on MySejahtera. Naturally, opposition will not be satisfied till they found a smoking gun or caught him red handed with something wrongful.
Khairy responded to say he is confused why they are still confused and express willingness to appear before PAC again.
He is always eloquent with his answers and brave to face questions from the media or other MPs. However, segment of the public seemed not convinced by his answers.
Till today, one can still see comments on social media claiming he profited handsomely from the government purchase of vaccine.
The reason being he refused to disclose the cost to the public and his unwavered motivation to push for vaccination while ignoring AEFI effect. Then the claim he is part of the Illuminati reset agenda for a new world order.
Vaccination and MySejahtera came under his charge since he was Science Minister and specifically assigned the task by then Prime Minister Muhyiddin Yassin.
Rumour mongers accused him of protecting Muhyiddin political and business interest more than UMNO's interest.
Maybe intended to blunt criticism, Khairy announced yesterday that MySejahtera check-in is no more necessary from May 1st onward.
Still, it could not allay doubts over his explanations. He still refuse to drop the scandal-tainted MySejahtera. Reason being it could be useful for post-pandemic electronic health.
Apparently the talk in the medical industry is it could be useful for health emergency system and health care management system that will be worth hundred of millions, or could even reach billion.
Khairy refused to heed PAC request and intend to proceed with the contract. He çould be accused of using proxies to dominate ownership on the contract for all three systems.
He is still pushing for government to pay for the MySejahtera system to the tune of few hundred of millions. The annual maintainance fee to Endomo itself is more than a hundred million a year.
There are cynics claiming the system only cost few millions. The government is being scammed.
Codeblue insisted the system developer Entomo is Singapore-owned. Khairy had always face d the stigma of being Singapore bias.
It was earlier claimed there was an attempt to sell MySejahtera to private company which Khairy has dispelled as still under negotiation.
However the structure of the MySejahtera set-up as in the shareholding, and directors of companies with equity in MySJ Sdn Bhd remain a mystery and is still looked at suspiciously.
A source seemed conversant on MySejahtera issue claim there are names obviously seen as proxies to the real owners, and corrupted political leaders.
Its unfair and stereotyping but the presence of many individual of Indian descent raised more suspicion because these days Indians are commonly used as corporate proxies by Melayu businessmen and politicians.
A name is purportedly known as wanted criminal abroad and is being represented by a lawyer openly known to be linked to a powerful and influential political leader and non-cabinet member.
The earlier claim of Entomo was doing MySejahteta as CSR was half truth. There is no free ride. Talk is that beyond certain number of users government had to pay Entomo.
A lot need to be uncovered but not sure PAC members are that capable of doing so. There is too much unanswered questions that the solution is to not pay Entomo for anything. Khairy told public it is CSR, right ....
Government is supposed to pay more than RM300 million for a system said to cost only RM7 million. Plus annual maintainance for few many years, it could be in the RM600 million.
If government willing to cough out so much for it, then it could only mean the payback is more and the data is certainly worth multiples more than 50 sen per individual data.
Another resourceful source claimed the MySejahtera data have quietly been sold to parties in India, China and expectedly Singapore. One can speculate it is to pay fpr government commitment.
The source is adamant Khairy is a liabilitu to UMNO and should go. We are still digging.
at 4/28/2022 12:06:00 PM