Jewish dimension to the Ukraine-Russian war

A video shared in social media claimed of covert activities inside the Azovstal steel rolling Soviet era factory, which is currently the last holdout in Mariupol for the Ukrainian resistance.
Russian forces have taken over the second largest city in the Donesk region and tenth largest in Ukraine, which has strategic value as land bridge, trading port and symbolic battleground. The video mentioned of the presence of bio-weapon lab inside the plant, implicating involvement of US President Biden and President Volodomyr Zelensky, presence of globally wanted criminals, hiding of NATO secrets, and the  plant protected by Nazi.
It only leads to the suspicion it is a war propaganda. The mainstream media, news and political portals, and social media are flooded with misinformation and fake news on the Ukraine-Russian war that one has no idea any of this is true or false.
More so, the video claimed to be produced by a Syrian portal, in which there is the strong Russian involvement in the conflict. Nevertheless, the mention of Nazi indicate it is Russian originated intended for Donesk. According to Washington Post in their article on Jews fleeing Ukraine, Putin falsely claimed the Jewish Zelensky and his government as Nazi.
It only indicate there is a Jewish dimension to the conflict and offers an explanation to the meeting between Israel Prime Minister, Naftali Bennet and Russian leader, Vladimar Putin as mediator early in the conflict.
Large Jewish population
The website https://jewishunpacked.com here wrote "Ukraine is home to one of the world’s largest Jewish communities and its historical roots run deep".
An extract from the article, below:

How many Jews live in Ukraine?

Hebrew University demographer Sergio Della Pergola put the number at 49,000 in his “World Jewish Population, 2019,” while The European Jewish Congress estimates the number of Jews to be between 360,000 and 400,000.

The most recent Ukrainian census was in 2001– the next census was scheduled to take place in 2020 but was postponed to 2023, according to the State Statistics Service of Ukraine.

Where do most Jews live?

Most of Ukraine’s Jews live in the country’s largest cities like Kyiv, Odessa and Kharkiv. However, many other smaller Jewish communities exist across the country.

“Some [Jews], especially elderly ones, live in smaller cities and scattered impoverished villages,” according to The Jewish Telegraphic Agency’s News Director Gabe Friedman, who put together a shortlist of places with large Jewish communities.

There was a plan: 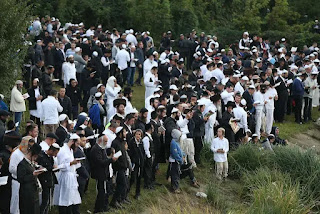 In 2020, President Zelensky said in an interview that his government was hoping to construct a “Little Jerusalem” in Uman that would include a historical museum, a big park and reconstructing the current synagogue there.

“We want to make an authentic little town. We created the name “Little Jerusalem” as an idea, to make it very authentic, in a very professional way,” he said.

Jews has a long history in Ukraine. Extract from Wikipedia below: 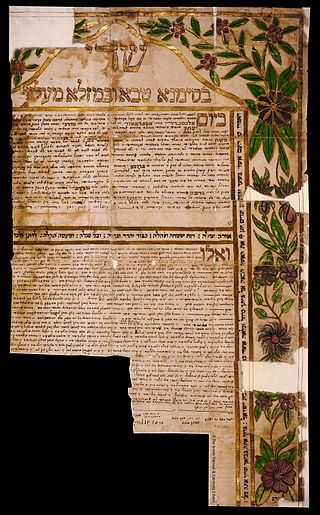 The history of the Jews in Ukraine dates back over a thousand years; Jewish communities have existed in the territory of Ukraine from the time of the Kievan Rus' (late 9th to mid-13th century).[9][10] Some of the most important Jewish religious and cultural movements, from Hasidism to Zionism, rose either fully or to an extensive degree in the territory of modern Ukraine. According to the World Jewish Congress, the Jewish community in Ukraine constitutes the third-largest in Europe and the fifth-largest in the world.[3]

Whilst at times it flourished, at other times the Jewish community faced periods of persecution and antisemitic discrimination. In the Ukrainian People's Republic (1917-1920), Yiddish was declared a state language, along with Ukrainian and Russian. At that time, the Jewish National Union was created and the community was granted an autonomous status.[11] Yiddish was used on Ukrainian currency in this same period, between 1917 and 1920.[12] Before World War II, slightly less than one-third of Ukraine's urban population consisted of Jews;[13] they were the largest national minority in Ukraine.[citation needed] Ukrainian Jews consist of a number of sub-groups with distinct characteristics, including Ashkenazi Jews, Mountain Jews, Bukharan Jews, Crimean Karaites, Krymchak Jews, and Georgian Jews.

In the westernmost area of Ukraine, Jews were mentioned for the first time in records in 1030. During the Khmelnytsky Uprising between 1648 and 1657, an army of Cossacks and Crimean Tatars massacred and took into captivity large numbers of Jews, Roman Catholics and Uniate Christians. Recent estimates are that 15,000-30,000 Jews were killed or taken captive, and that 300 Jewish communities were completely destroyed.[14]

During the 1821 anti-Jewish riots in Odessa following the death of the Greek Orthodox patriarch in Constantinople, 14 Jews were killed. Some sources claim this episode as the first pogrom.[15] At the start of 20th century, anti-Jewish pogroms continued to occur, leading to large-scale emigration. When Ukraine was part of the Russian Empire, antisemitic attitudes were expressed in numerous blood libel cases between 1911 and 1913.[citation needed] In 1915, the Russian imperial government expelled thousands of Jews from the Empire's border areas.[16][17]

During the conflicts of the Russian Revolution and the ensuing Russian Civil War, an estimated 31,071 Jews were killed between 1918 and 1920.[18] During the establishment of the Ukrainian People's Republic (1917–21),[19] pogroms continued to be perpetrated on Ukrainian territory. In Ukraine, the number of civilian Jews killed during the period was estimated at between 35,000 and 50,000.

Pogroms erupted in January 1919 in the northwest province of Volhynia and spread to many other regions of Ukraine.[20] Massive pogroms continued until 1921.[21] The actions of the Soviet government by 1927 led to a growing antisemitism in the area.[22]

Total civilian losses during World War II and the German occupation of Ukraine are estimated at seven million. More than one million Jews were shot and killed by the Einsatzgruppen and by their many local Ukrainian supporters in the western part of Ukraine. In 1959 Ukraine had 840,000 Jews, a decrease of almost 70% from 1941 totals (within Ukraine's current borders). Ukraine's Jewish population continued to decline significantly during the Cold War. In 1989, Ukraine's Jewish population was only slightly more than half of what it was thirty years earlier (in 1959). During and after the collapse of Communism in the 1990s, the majority of the Jews who remained in Ukraine in 1989 left the country and moved abroad (mostly to Israel).[23] Antisemitic graffiti and violence against Jews are still problems in Ukraine.[24]

Jews faced pograms at the end of the 19th century to early 20th century and Nazi's holocaust. Millions fled but there have been those that return to Ukraine.

Picking up from Zelenskyy's plan, the Jerusalem Post reported the following news:

According to MEMRI, Mraweh Nassar said that the West has forsaken the Jews because the Zionist will fail in two years. 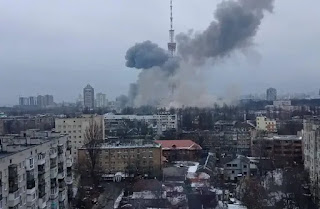 The Jews are the ones behind the Russian invasion of Ukraine, and their goal is to create a new Jewish state to replace the failing Zionist project of Israel, Palestinian Islamic scholar Mraweh Nassar has claimed, as reported by the Middle East Media Research Institute (MEMRI).

Nassar, whom MEMRI identified as the secretary-general of the Jerusalem Committee of the International Union of Muslims Scholars, made his claims on March 22 while speaking with Channel 9, an Arabic-language TV station in Turkey that the media watchdog says is affiliated with the Muslim Brotherhood.

According to Nassar, the traditional allies of the Jews – the US and the West – have realized that Israel will “come to an end” within just two years, which has caused them to forsake it.

Consequently, his theory goes, the Jewish state has found new allies in Russia and China with a new goal: creating a Jewish state in Ukraine.

This, in turn, will be supported by claims that Ukraine is the true home of the Jews, who will even declare that biblical Jerusalem, along with the First and Second Temples, were actually located within Ukraine all along, MEMRI quoted Nassar as saying.

A commentator shared a link to claim there is the possibility of Zelensky's collaboration with Nazi, as below:

The Jewish News Agency JTA confirms that soldiers from the IDF were involved in the EuroMaidan protest movement (in the heart of Kiev, UKRAINE capital) under the direct command of the Neo-Nazi Svoboda Party. Israel is very much involved in engineering and inflaming the crisis in UKRAINE, the ISRAELIS’ REAL HOMELAND.

The TRUE HOMELAND of the Israelis is NOT Palestine at all: The REAL Homeland of the Israelis is UKRAINE, Belarus, Khazaria and surrounding Soviet areas. Every single Israeli Prime Minister has citizenship of those countries, with FIVE of them coming from UKRAINE !!!!!

The commentator listed 13 former Israel Prime Ministers who originally came from this region. It confirms there is more to the story than as reported by the Western dominated mainstream media.

"IDF soldiers DEPLOYED in UKRAINE !!!!! The Jewish News Agency JTA confirms that soldiers from the IDF were involved in the EuroMaidan protest movement (in the heart of Kiev, UKRAINE capital) under the direct command of the Neo-Nazi Svoboda Party. Israel is very much involved in engineering and inflaming the crisis in UKRAINE, the ISRAELIS’ REAL HOMELAND.

The TRUE HOMELAND of the Israelis is NOT Palestine at all: The REAL Homeland of the Israelis is UKRAINE, Belarus, Khazaria and surrounding Soviet areas. Every single Israeli Prime Minister has citizenship of those countries, with FIVE of them coming from UKRAINE !!!!!

THIS ALSO APPLIES TO 95% OF THE ISRAELIS THEMSELVES.
Advice from Zack Jalamani: '95% of ALL so-called Jews in Palestine now are from Eastern, Central and Western Europe as well as from North America and Australia, the other 5% are from North Africa, the Levant, Yemen and Ethiopia. NONE of them has any right to be in Palestine NOT even the ones from Yemen, Ethiopia or North Africa. Palestine is not their ancestors’ homeland. A Yemeni Jew is an Arab from Yemen, not a Canaanite like us, Yemen is his ancestral homeland. An Ethiopian is an African from Ethiopia and has no right to be in Palestine. As for the majority 95% who trace their roots to Khazaria they should go back to old Khazaria [Southern Russia, part of UKRAINE and part of Georgia].'

These converted Eastern European Jews are not from the Holy Land and have no right whatsoever to be there. Anyone who cannot see that the Israelis have been conducting Genocide and Land Theft against the REAL Semitic people the PALESTINIANS, and further fails to see that the ISRAELIS ARE THE MOST ANTI-SEMITIC IN THE HISTORY OF THE WORLD, is really Denying Reality.
The Zionists and their relatives in their UKRAINE Homeland are behind the unrest in the UKRAINE. Having brought UKRAINE to the brink of war, the UKRAINIAN Jews who ALL, YES ALL! have Israeli passports are invited to migrate to Palestine to take Title to Stolen Palestinian Land, and receive a US$50,000 GRANT to build on that Stolen land.

...As Israel never hesitated to kill British and Americans in False Flag attacks, there can be little doubt that Zionists in the UKRAINE were responsible for launching the missile that brought down the Malaysian Passenger jet MH17, and were so quick to blame the Russians.

This is Netanyahu's strategy behind the ZIONIST INSTIGATED UNREST in the UKRAINE. Netanyahu wanted to "GIVE" the UKRAINIAN Zionists Gaza, but he failed to get the land "CLEARED" in time, so he is Stealing the Thousand Acres of Palestine West Bank to accommodate the arriving UKRAINIAN Zionists who have done their utmost to destabilise UKRAINE and bring it to the brink of war, and the world closer to WW3."