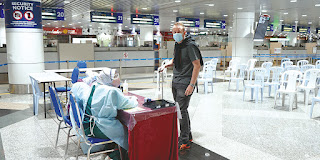 Life of Annie blog picked on Wong Chun Wai and his The Star team attempt to hype an issue out of non-issue RTK-AG testing at airports.

She even called him as Lim Kit Siang of The Star. Whether it is a compliment or insult, Kit Siang is renown for his ability to subversively provoke public sensitivity along racial or religious angle to create issues out of non-issues.

When Malaysia Airport Holding Berhad (MAHB) is touched, there are usually some hidden hands or self interest behind the scene.

The most recent issues were Desmond Lim suspiciously colluding with Tengku Zafrol to privatise Subang Airport and tender for KLIA Aerotrain.

One wonder the motivation behind the luxury the editorial afford themselves to send five reporters to pursue a Covid-19 story, in which the public hardly bother these days.

The motivation could be economics. Who then is the hidden hand and self-interest behind the hyping?

The link is here but was taken down. MAHB responded here and made report to police and MCMC.

BP was awarded through an open tender. MyEG.com is already the payment gateway partner for Ministry of Health (MOH) but they suddenly were bidding for the testing business.

There seemed to be trend from PN administration then of those with vested interest colluding with government to dominate all projects from GLCs. It was anticipated that the APM and BHS tender will be questioned too and MAHB slandered again.

Since then, private testing was provided by MAHB before the complete reopening of airport and borders. At the time, PCR test requirement was still enforced.

MAHB provided the service for travelers to make it faster and more comfortable processing for passengers willing to pay for it. There were complaints from passengers having to wait for hours to get their PCR test at MOH counters.

MOH gave the PCR test for free to Malaysians, but many still opted to pay for a hassle free and shorter waiting time.

MAHB responded to The Star's initial article by the probing team, "Getting testy upon arrival". Taken from The Mole below: 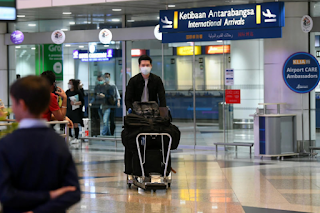 SEPANG, April 8, 2022: Malaysia Airports Holdings Bhd (MAHB) has clarified that international travellers are not required to undergo the RTK-AG tests upon their arrivals at the airports as claimed in some media reports.

In its statement today, MAHB said the latest standard operating procedure (SOP) states that international travellers are only required to do the RTK-AG test within 24 hours upon arrival in Malaysia at any private health facilities including clinics and hospitals of their choice.

It stated that the testing facilities at the airports were actually made available for passengers who wish to have the convenience of doing the tests right away upon their arrival.

MAHB also dismissed claims that there has been a monopoly in conducting such Covid-19 tests at the airports.

MAHB also noted that the government had announced the exemption of tests upon arrival for travels between Malaysia and Singapore for fully vaccinated travellers as part of the specific safety protocols between the two countries.

It stressed that passenger processing at Malaysia’s international airports have significantly improved in terms of speed and efficiency since the reopening of the country’s borders on April 1.

The statement is self explanatory and widely covered by media and news portals. One only need to google for keywords RTK-AG MAHB.

Yet Wong Chun Wai responded with the editorial "Ahead of the Curve" in which Annie described him downplaying the importance of RTK AG test, and continued his allegations on monopoly.

She was sharp enough to spot in her example that Chun Wai hardly complained on the defunct and naughty boy of the Malaysian aviation, Air Asia.

It was obvious his main interest is economics and monopoly is the issue. Thus it will not be a  surprise there are parties still wanting a piece of the pie for RTK-AG testing on arrival at the airports.

Government clearly said passengers can do the RTK-AG testing within 24 hours. If testing facilities at the airport is not competitively priced, it could be done at clinics outside the airport.

Is it a problem that passengers do not mind paying RM100 vis-a-vis RM60 at clinics so they can go straight home and save the hustle of finding a clinic and put up with the inconveniences with cheaper testing?

Why then is Chun Wai trying to repeat himself albeit loudly. In fact, The Star is still at it today in a letter to the editor, below:

I REFER to the report “MAHB: Not mandatory to do RTK-AG tests at airports” (The Star; April 9; online at https://bit.ly/3xicDh5).

Malaysia Airports Holdings Bhd (MAHB) as the operator of airports across the country should put up signboards at the entrance of the arrival hall at each of the international facilities clearly stating that passengers are required to do the Covid-19 rapid antigen test (RTK-AG) within 24 hours of arrival. It must also be stated clearly that it is not mandatory for the tests to be done at the airport.

It would also be a great help to travellers if the airlines get their flight attendants to make an announcement about the requirement for testing before landing.

As a transparent measure, MAHB should also include the fees for the tests as well as a list of clinics providing the service on the signboards. It may mean going the extra mile to provide this information, but at the end of the day, foreign visitors would depart with a positive impression of their stay in Malaysia.

The service provider should be reasonable with the charges for the tests. To be fair, the same rates should be charged for both Malaysians and foreigners.

I am not wrong to say there has been a lack of communication among local agencies to disseminate information to international arrivals, hence the confusion if there is a need to do RTK test at the airport.

It is also surprising that MAHB has dismissed claims that Covid-19 testing at the airports is not monopolised by certain private healthcare operators. If having only one service provider at each airport is not a monopoly, then what is it?

When travelling, every extra dollar spent unnecessarily is a burden, so please be fair.

Saturday Night Live character Rosanna Danna famous line played by Gilda Radner would say, "If it is not one thing, it is another".

Its noticeable the letter does not sound like its written by a Mat Salleh. Perhaps it is the last say face saving to cover the sloppy reporting and investigation by Chun Wai and The Star.

The need for RTK-AG testing on arrival is Government's policy. Malaysia is still at the transition to endemic phase and not endemic yet so health measures are still precautionary.

Chun Wai surely could appreciate that one slip up and the numbers of positive could spike up again.

He should remember the incident of large number of returning passengers with positive Omicron from the first batch of Malaysian allowed for umrah. They registered negative results prior to departure from Jeddah. Some were positive but still ushered in by Saudi Air.

The one Chun Wai not likely to know was that the first set of Omicron case were few travelers from the list of countries banned managed to slipped in through Singapore as port of embarkation.

For these reasons, the public could appreciate MAHB put safety as the utmost concern over total flexibility.

The monopoly issue reflect Chun Wai's inconsistent stand. The motto the Air Asia which he whole heartedly support and Tony Fernandez admired is merely being emulated.

If you don't like their low cost service, you don't have to fly with them. Choose better service airlines for higher cost.

There are always people who do not mind paying more for convenience and better service of Airport taxis than taking bus to Nilai or train to Sentral or get a family member to drive down, wait and pick up at Sepang. When people are given choices, it is not a monopoly.

Tell whoever behind klse.i3investor.com to stop pushing their luck to repeat the issue. Tender date long closed and awarded. Pandemic waning and tender will likely not be reopen.