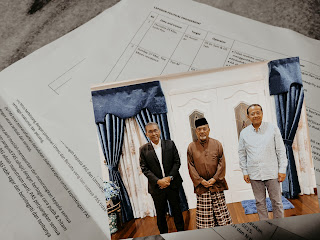 On March 24th, former PAS Youth leader and current Information Chief, Ir Khairil Nizam Khirudin made a stand that the Prime Minister should be a Muslim. Naturally, it brought out a predictable reaction from DAP and Ronnie Liew responded.
Both parties remained in character. It proves the ideologies of PAS and DAP are diametrically opposite and the path for any political cooperation is difficult.

After PN's crushing defeat in Johor, PAS is in need for a political soul searching. On the same date Khairil made his comment on twitter, Dr Samsuri and Takiyuddin Hasan started their fact finding engagements.

The first was Azmin Ali at Sushi Ryu Japanese restaurant near KLCC. Not much came from Azmin except him denying involvement in Parti Bangsa Malaysia and refusal to any form of cooperation with Anwar Ibrahim.

Over the two weeks, engagements by the duo included visits to the homes of Mahathir, Hishamuddin, Hamzah Zainuddin and Tajuddin Rahman.

The alleged fact finding report leaked and the conclusion that can be drawn is both PAS and PPBM are in a precarious political position without viable options within their grasp. 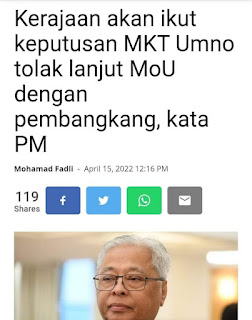 For PAS, they are dependent on engagements with UMNO and PPBM leaders to keep them in the know and draw up their options. It is also needed to convince members that situation is stable and under control.

Actually it is otherwise. With MKT endorsement of himself as poster boy, Ismail Sabri agreed with UMNO Supreme Council decision to reject extension of the CSA. It has actually been breached by PH for rejecting the SOSMA renewal.

PAS, PN and Putrajaya Camp in UMNO needed CSA 2.0 to delay GE15 in favour of the riskier option for BN to insist UMNO hold its party election before GE15.
The ulterior motive is to rid of Zahid and Mohamed Hasan. Subsequently, PAS and PPBM could ride on the strength of UMNO in an "equal" power sharing arrangement.
PAS and PPBM are not shaken by UMNO endorsement of Ismail, but reacted vociferously against his agreement to UMNO General Assembly call for snap election and MKT rejection of CSA 2.0. 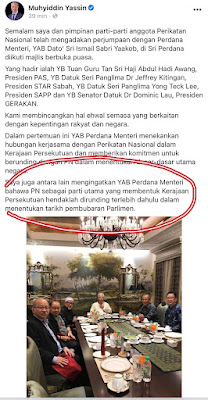 Muhyiddin and Hadi Awang could not hold back from displaying their jitters to apply pressure on Ismail.

Upon his return from the recent Middle East visit, PN met Ismail for buka puasa as planned in Doha where Muhyiddin drove the message that dissolution of Parliament to be decided collectively by the coalition government and in accordance with the agreed terms in the CSA with PH.

Hishamuddin was in Doha but he knew earlier efforts for the same by Shahidan, and company failed.

A Deputy Minister aligned to Khairy told Dr Samsuri and Takiyuddin at Majestic Hotel that despite having more MPs, the Putrajaya Camp lacked the strength and presence in the party hierarchy. They have given up with only few lone voices left.

The Deputy Minister prefer Hishamuddin to take leadership of the Putrajaya Camp. He believed Hishamuddin has a workable strategy, but is not trusted by Ismail and Mahathir Khalid for his stealth manouvers. 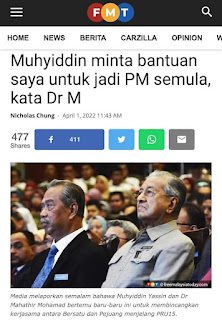 Though waning in popularity and playing it safe, Hishamuddin has a diplomatic solution to the Najib and Zahid logjam. It is unlike Hamzah Zainuddin brutal approach which could backfire.

Hamzah preferred the court to oust Najib, Zahid and Mohamed Hasan. He intend to block any attempt by UMNO to apply to ROS for change to the party constitution on the date for party election.

UMNO is planning an EGM in May and have not prepared for branch or division meeting for June - July to enable party election by December.

Hamzah told the two PAS Ministers on April 4th at his home that Zahid was the stumbling block to PPBM's earlier plan to dissolve UMNO. And, he agreed with Raja Petra's expose of Tok Mat.

Strangely the article appeared on the same date as the visit thus indicating he was aware of the plan before hand. UMNO MKT member Razlan Rafii suspected it was an organised plan.

Tok Mat was cleared by MACC and Gani Patail more than 10 years ago and the late VK Lui replied no case to an enquiry in Parliament in 2019. The optic is not good.

However, Ismail should seize the opportunity to do horse trading to offer Tok Mat to replace the ineffective Tengku Zafrol.

Ismail appeared weak because he is delicately juggling and balancing the opposing interests of leaders within his political party, coalition government and MOU with PH. Mahathir expect Ismail to be him.

Unfortunately, the PAS duo underestimated to unfairly conclude Ismail as having inferiority complex and his team as slow and unproductive.

It justify Ismail to severe the stiffling CSA and coalition arrangement. With UMNO supporting him, Ismail has the trump card to threaten PN to dissolve Parliament. 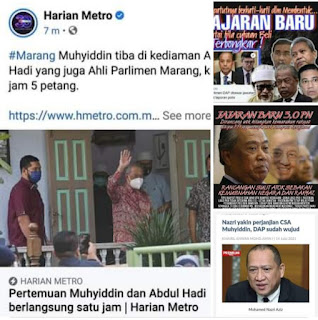 The CSA was originally Muhyiddin's desperate attempt then to hold to power through Jajaran Baru (new alignment) by offering a bipartisan government to PH in exchange for support to remain as PM.

Expectedly it was rejected, and that ended Muhyiddin's premiership. It was then shoved to  Ismail to implement only to realise later it limits his option to assemble a credible cabinet and curb his prerogative as PM.

Muhyiddin is recycling the bipartisan idea guised as the proposed large canopy. Mahathir revealed it was part of his plan to topple Ismail before GE15.

Mahathir was approached for support to return Muhyiddin as PM. Pejuang is on a wait and see mode. Mahathir merely smiled.

It is an open secret the palace will not tolerate another change of PM and upon request, consent to dissolve Parliament.

Running out of option 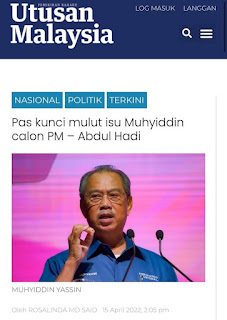 For Muhyiddin to divulge his intent early, it is indicative he ran out of option. The same situation he was in when 15 UMNO MPs withdrew support.

Melaka and Johor state elections proved Muhyiddin fallen out of favour with voters and now a political liability.

PH made known their disgust to his back stabbing in the Sheraton move to assume PMship. Unlike Lim Guan Eng's strong opposition to any collaboration with Muhyiddin, new Secretary General Anthony Loke is warmer to Muhyiddin and PPBM.

Nevertheless, he hinted his reluctance for PAS by mentioning the need for a stable canopy. Amanah will not sacrifice their relationship with DAP for sake of PAS.

Saifuddin Nasution and his opponent for PKR Deputy Presidency, Rafizi anticipated MN to fail because PAS is a difficult partner. DAP gone through with PAS twice and makes no bone to insist no PAS in any new election coalition.

The large canopy proposal is Muhyiddin acting out of vengence to deny BN from returning to power.

It is not as straightforward as he hoped. There could be opposition from within against working with DAP and/or Anwar. Neither has PAS changed their stance towards Anwar and DAP. 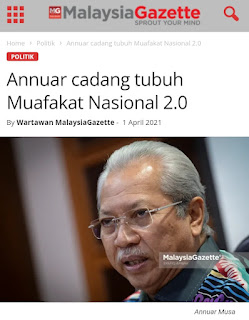 Pushing it too hard could end up PAS leaving PN and PPBM to lose its leverage and last bargaining chip.

PAS allows PPBM an option for back door collaboration with UMNO through MN plus. Again Muhyiddin is deviously waddling in another pond behind PH back.

Running under MN plus means no more one on one fight. PPBM hope to benefit by riding on the formidable size and machineries of UMNO and PAS.

The arrangement will not be favourably considered by UMNO. Hamzah suggested a kicker to the deal by PPBM making the sacrifice to return UMNO the 15 frogged seats.

It is not for certain Muhyiddin is agreeable. So do the PWTC Camp to Annuar Musa's suggested tripartite MN with PPBM.

Despite the kicker, Hamzah imposed the condition that Najib and Zahid should be out of the picture. And, it is along the same line of thinking as Azmin, Muhyiddin, Mahathir and few members of Putrajaya camp. 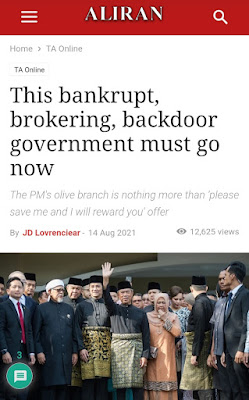 In the leaked report, PAS realised PPBM is on a downhill slope. The party is splitting into three, Azmin-Hamzah rivalry intensifying, PPBM Sabah distancing from PN in favour of GRS, and members deserting the party.

Situation worsened by Muhyiddin who is in denial to the fact that his luck has ran out.

Behind PPBM's back, Dr Samsuri attempted to negotiate for seats in Johor with Tok Mat and expressed willingness to abandon PN. It was out rightly rejected.

This leaves PAS with the only realistic option within their grasp. It explained for the post-PRN Johor change in Hadi's tone towards MN with UMNO. 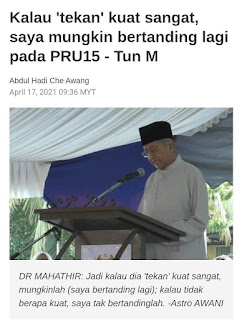 Mahathir is on similar mindset when he mentioned to Dr Samsuri and Takiyuddin his often used cliche for Malay to unite.

The descendent of a Malabari from Kerala could not accept Anwar, Najib and Zahid as Malay to unite with. Yet, he is willing to accept a diluted DAP to replace MCA, Gerakan and MIC.

The duo concluded Mahathir and Pejuang has no more traction and influence.

The indication is Shafie Apdal refusal to be part of Mahathir's plan to push him to national prominance. He stopped all collaboration with PH and took in two DAP assemblymen into Warisan.

Mahathir may have expressed his displeasure with Muhyiddin openly, but his critics of Muhyiddin is merely token opposition and hardly damaging.

There are political pundits betting money that they are in collaboration. Currently, both lacked the energy, trust and wow factor to unite the warring opposition that delivered BN its first ever defeat. 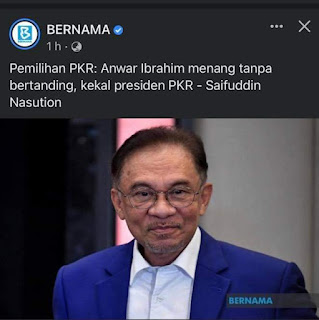 There is no other leader able to gain the trust and confidence of all concerned to mend the wounds between the political parties and factions.

Anwar still retain the PKR Presidency and like Muhyiddin, still aspire to be PM. It only complicates further the situation constrained by too many personal rivalries, and negating conditions imposed. 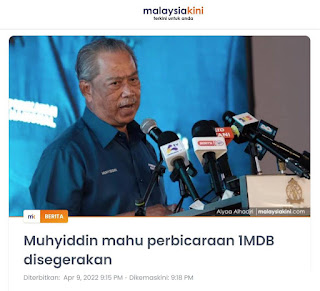 Then there is the unrealistic expectation to rely on the court to deliver their preferred judgement and within a stipulated time frame.

Those sceptic of Ismail underestimated his diplomatic ability and patience to listen. His latest gesture to accept Zahid's calling could unify the two camps in UMNO to face GE15.

Time is running out to get the canopy laid out before CSA expire at the end of July or perhaps earlier due to PPBM imposed constraint from the timely passing of the anti-party hopping law.

What they say and what they do was and not going to be the same. Too great a deficit in trust.