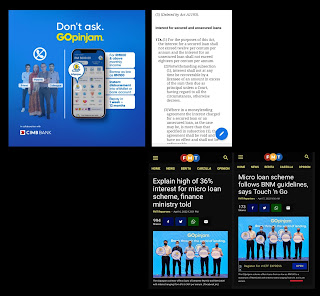 TNG Digital responded to FMT as reported here with claims it is regulated, follows BNM lending guideline, will adhere to code of conduct, credit check to ensure ability to pay, etc etc etc ....

If the applicants are creditworthy, why charge at 36% per annum?

By taking refuge behind authorities with cliche and standard PR answers, it means BNM Governor and Minister of Finance condone this sort of unethical lending practises adopted from shareholder, Ant Group of China.

In yesterday's posting here, it was explained with links and video containing elaborate explanations as to the problems Ant Group and its business model faced.

They got in trouble with both American and Chinese authorities across the Pacific divide. Issue covers security, situation during their failed IPO, potential of a financial contagion effect and risk of non-bank undertaking banking activities.

Of late, public is worried that private and confidential data held by non-banking services such as Touch N Go's RFID, utilities companies, MySejahtera etc reach into wrong hands and led to widespread scams.

The Private Data Protection Act is not well enforced and wrongdoers not sufficiently investigated and prosecuted. In fact, suspected scammers such Nicky Liow seemed to pally pally with political leaders and law enforcement. 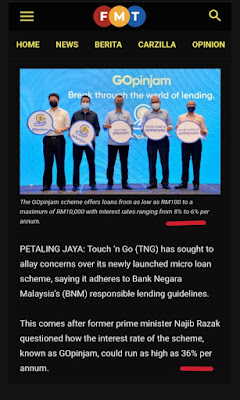 Micro loan scheme follows BNM guidelines, says Touch ‘n Go
FMT Reporters -
April 7, 2022 9:56 AM
PETALING JAYA: Touch ‘n Go (TNG) has sought to allay concerns over its newly launched micro loan scheme, saying it adheres to Bank Negara Malaysia’s (BNM) responsible lending guidelines.
This comes after former prime minister Najib Razak questioned how the interest rate of the scheme, known as GOpinjam, could run as high as 36% per annum.
“TNG would like to clarify that GOpinjam and its underlying product (e-Zi Tunai by CIMB Bank Bhd) are fully regulated with the right codes of conduct in place,” it said in a statement to FMT.
“All applicants will also be subject to bureau credit checks to ensure that loans are only provided to those who have the means to repay.”
The company said the scheme targeted a segment of the market that was usually underserved, namely individual borrowers who require lower credit amounts for shorter periods of time.
It maintained that all terms and conditions for loans would be provided clearly and upfront to applicants, adding that this was “typical of good financial services practices”.
“We also ensure that returning customers with good repayment histories would enjoy lower interest rates in the future,” it said.
TNG launched the GOpinjam feature within its e-Wallet platform last week. Jointly developed with CIMB, it offers personal loans from as low as RM100 to as high as RM10,000.
The repayment period can range from one week to one year, with no hidden fees or early settlement charges, TNG said.
According to its website, the interest rates vary from 8% to 36% per annum, depending on the amount and duration of the loan approved by the bank.
Yesterday, Najib urged the finance ministry to explain why the interest rate for the GOpinjam scheme could amount to 36% a year, saying this would only be a financial burden to users.
-----------
No explanation mentioned on why and how 36% is charged. 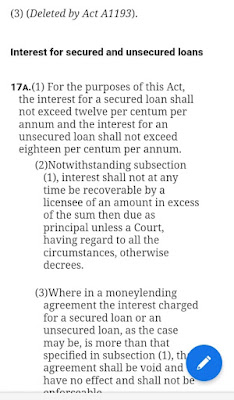 The above is an extract of the law governing money lending with respect to the maximum rate charged. Clearly a so-called BNM guided institution is charging up to double the ceiling allowed for legalised Ah Long or loansharks?
The law was meant to curb illegal loanshark money lending business but BNM allowed subsidiary of a Bank morphed into an Ah Long.
This is clearly the hymie rearing its head from the subsidiary of a government owned bank with an oppresive business to squeeze on people in financial difficulty.
Government outfit is supposed to help rakyat in difficulty and not oppress them. One can foresee the lower income and the M40 turned B40 due to lockdown and emergency become victims.
The majority will be Malays!
at 4/07/2022 12:42:00 PM