I attended the public lecture by the famous interfaith historian, Dr Karen Armstrong at the Mandarin Oriental yesterday as promoted by Nuraina Samad here and came out enthralled and enlightened.

I was enthralled at her mastery and understanding of the religions of the world, particularly her area of expertise in monotheistic religion. And, I was enlightened with her elaborate description of the key essence of all religions.

I felt somewhat vindicated for her words I believed reinforced my position here for dialogue as a resolution to a looming interfaith explosion in our society. Perhaps that posting was mired by few not quite tactful commentators and admittedly my outburst, however it should not diminish my position for a societal resolution over the legalistic, bureaucratic, and political alternative.

Is not society the key determinant to the form of law, government and leadership?

The first idea she promoted is that the heart of religion lies in silence.

The cry of Allahu Akbar (Allah is great) is a state of ecstatic victory felt after wee hours of the night to perform tahjud (special late night prayers) and zikr (repeated recitation of God). The silence and contemplation till early transports one to the realisation of his insignificance with respect to God and that brought about a sense of humility.

As Dr Armstrong described, silence is the non definitive aspect of religion expressed in feel and experience. The journey towards the state of Nirvana in Buddhism is a practise of meditation done in silence.

In reply to his pupils’ enquiry of his request to not speak, Confucius said “Heaven does not speak. Look at how productive it is.” This is a more practical aspect of this concept. 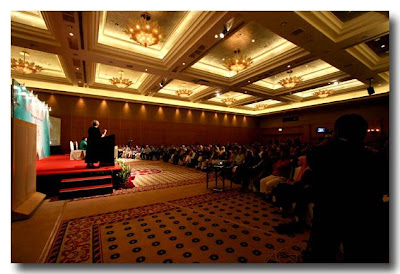 The concept of silence is truly relevant in this electronically connected world, where “he or she thinks only they are right”. It is in silence that lies the answer to the loudness of conflict. It is often the introduction of adversarial and assertive elements that seldom lead to differences and erupt into conflicts with never ending offensive and defensive posturing.

Her second idea was that the catalyst for all religions rose out of revulsion for violence.

After Muhammad had to unavoidably draw battle to the hostilities and after neutralising it, he resort to a less favourable compromise for the Hudaibiyah peace treaty. The following year, Muslims were allowed into Mekah for haj and peace allowed Islam to flourish.

The Jains talk of the concept of ahimsa or non anger. Many gospels talk of Jesus Christ as practicing ahimsa as he taught his followers to turn the other cheeks. Christianity is propagated by the stories of Jesus Christ as a man of peace, love and compassion.

The gist in the practise of Yoga is to rid the core of violence. That lies in the whispers of ego, “me, me and only me!”

Mahatma Ghandi achieved more for India’s pursuit for independence and interfaith strife with his non violence movement. After his bad experience in South Africa, he realised that powerful forces of evil can be overcome through peaceful ways without violence.

In this respect, religion remains relevant for humanity as the moral preparation to prohibit violence.

Dr Armstrong described all religion as promoting compassion and to feel for each other.

Islam seeks to look into the heart to treat the poor, orphan, widows, children, travelers and such. Confucious talks of “Do not do to others what you do not like to do unto you.” The Bible talks of “Love thy neighbour.” The Chinese sage Mo-Tzu (c.480-390) insisted that we had to have jian ai, "concern for everybody".

When asked to recite the whole Torah with one leg standing up, Rabbi Hillel "What is hateful to you, do not to your neighbor: that is the whole Torah, while the rest is the commentary thereof; go and learn it."

When Azlina Jeilani’s application was struck off by the Federal Court, I commended PEMBELA for refusal to claim victory and promote dialogue. In those words, there is humility, silence to break the impasse, and compassion. Truly, they have not refused dialog with DAP and this weekend ABIM is part of a 5 NGOs Interfaith event in Kajang. Read here. 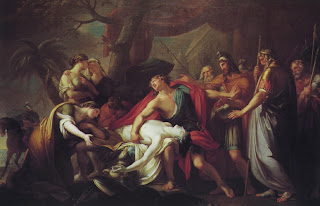 Dr Armstrong ended her lecture with her interpretation of the epic battle of Achilles and Hector from the Iliad. As both of them weep – Achilles, and Hector’s disguised father and Troy king, the two warring parties became bonded as rage is set aside for compassion. The cry raised their divinity and Achilles the victor returned Hector’s body for burial.

Should we not begin to weep, resolve our differences, and raised our spiritual status through compassion?

Resolution to societal differences lies not in dogmatic righteousness of the law of the courts, bureaucracy of government, and narrow interest of politicians and self interest groups, but “silence” engagement in non confrontational and inclusive ways.

I stand to believe that religious dispute should be entrusted to practitioners and wise men of cloth and not be superseded by outliers of fringe groups, deviationist and non practitioners. Let society be involved to resolve its own dispute, and not be constraint and made subservient to the courts, government, politics, and interest groups.

Perhaps, I should not be hypocritical to not seek for political resolution to many current and longstanding impasse. Could silence treatment negate the practitioners of might is right? Let me warmup to the application of this idea outside its origin.

The Way of Religion

Earlier in her speech, Dr Armstrong described the present global scenario as conflict between fundamentalism and modernism. There is a state of rising religious orthodoxy in the world today. Religious atrocities are being committed due to an asymmetric power situation. 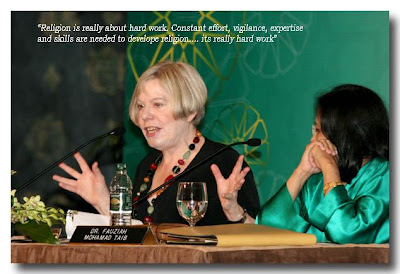 Picture by Jinggo
As she described the essence of all religion, it dawns on me that she has actually convinced me that the way of God and religion is still the way forward. Which way and which God is for each to pursue? I would without any single quark of doubt proclaim that Allah but the only God and Islam is the religion. That proclamation would not be compulsive on the non believer.

I plead all Malaysian to not discard religion. Isn’t belief in God lies an essential foundation of our country and its already explicitly expressed in the nation’s first ideological cannon or the Rukunegara?
at 6/17/2007 01:46:00 PM

i was reading the draft of this posting under my google reader early this morning.

silence is golden, golden
but my eyes can see ...

will the foreign ministry invite another banned author, Salman Rushdie, after the successful reception of Karen Armstrong?

"Percaya kepada Tuhan" does not mean it is alright to interpret there is "Pluralism" in the approach of 'God'.

People like Dr Armstrong promote understanding of Islam or for that matter, other religion from the angle of peace and positive universal values.

I had written one already tapi mengatal nak fancy it up with a you Tube of whirling dervish berzikir.

thanks very much for writing this so well and in so much detail. i couldn't be there but you've filled in some of the gaps for me.

Thank you for this. I get a better idea from reading your blog than what I got in the papers.
And that commentator abt bringing on Salman Rushdie -- flippant and shallow.
Sir Salmon is hostile to Islam. Get it?

karen armstrong is admirable.
her point that each side should listen to each other is perhaps the only way to avoid intolerance and extremism but will this ever be achieved?...

i'm pessimistic...politics is at the root of all these religious conflicts as she rightly pointed out and it'll not go away anytime soon...

Voice, a marvelous piece encapsulating the core of Karen's talk. I couldnt be there but you did it for us who missed the discourse.All religions preach especially compassion. Therefore I cannot figure out how religion is brought in to split up husband and wife and the kids. Tomorrow I join Haris Ibrahim under the flagpole at Dataran Merdeka to make this statement.

I came back a quite too early in the morning. Be sure to watchout for any leeks.

Thank you for filling the gaps for people like me who could not attend.

I only wish there was less organised religion which of course, leads to politicising religion for other purposes.

Voice, I was referring to Revathi who is being rehabilitated and not Subashini.

Zorro - Tks for the clarification.

Subashini, now Revathi, and what more in the future.

People cry over Lina Joy, but what about Suzy Teo and perhaps I have not forgotten Natrah?

Can there be a non violence, confrontational and non-legalistic/authoritative way of handling it?

Can we do things in "silence" and not disrupt order and encroach!

I'll discuss it when I m ready.