Musa and Tengku Razaleigh came, saw but one conquered, while the other conked!

In a standing room of mostly post 1969 born, Tengku Razaleigh, or affectionately called, Ku Li, took the crowd on a historical “ranjau sepanjang jalan” trip onto the path of modern Malay and Malaysia towards economic and social development. Whilst, Tun Musa’s attempted to provide a briefing on Iskandar Development Region (IDR) to a group of Kuala Lumpur-based Johorean proved to be disastrous. 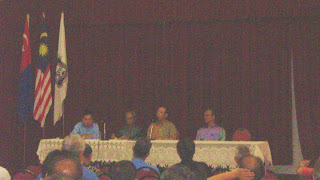 Musa was said to be very nervous, prior to the briefing session organised by the Persatuan Anak Melayu Johor (PAMJ), meant particularly for Johorean based within the Klang Valley last night. Although he managed to regurgitate his same line of arguments, Musa didn’t quite grasp the issues posed to him and didn’t survive the last few shelling from the floor.

Musa explained that he is not the Chairman of the IRDA and not involved in its policy formulation and implementation but merely a member of the IRDA International Advisory, together with Tan Sri Robert Kuok, Tan Sri Kishu, Tan Sri Shamsuddin and banker Andrew Sheng.

There was a brief presentation of the IDR conceptual plan by Encik Ismail, believed to be UEM’s Vice President for Planning, but much of the briefing session was done by IRDA’s top officio, Dr Iskandar. The presentation was basically the same information already provided to the mainstream press, their official website, and Internet blogs – a massive Metropolis development.

The pertinent issues raised by the audience were the Singapore factor, edging out of Malays in urbanisation, and benefit for the local Johorean.

Musa gave an unconvincing answer to the Singapore issue by relating Goh Keng Swee’s perceived embrasive response to Johor’s intention to build a Port in his early days and his perceived new concept of regional state. He tried to downplay the Malaysia-Singapore Ministerial level committee on IDR.

Much of the shelling he received was on the Johorean Malay interest and it did not help his cause with the sketchy answer given by Dr Iskandar on the opportunities available, if not lack of any definitive proposal. Ismail also mentioned that manufacturing will not be the main thrust of economic development at IDR but services.

This brought about a strong response from the floor that gave a history of the conception of IDR and called IDR a promotion of an incomplete plan and merely a concept play of only property development with no content and clear direction, unlike Labuan, MSC, and Langkawi. There is much truth for Musa and his team was constantly saying they are in the midst of studying and drawing up plans for many aspects of IDR, and short of bragging the credentials of the team members rather than deliverables.

The IDR plan criticised for doing the contrary to the planning approach of Tun Abdul Razak to seek for prior response and constant feedback from the people, as raised by Musa at the Seminar Legasi Tun Abdul Razak. He claimed IDR was shoved down the Johorean throat and no briefing and effort to seek the people's acceptance. While Musa and his team tried to deny, other voices rose to confirm the claim.

Musa tried to explain his position on removing the Malay affirmative action policy within the IDR by raising four common issues raised by foreign investors – security, quality of life, incentives, and affirmative action. He tried to push the point of quality instead of fascination with figures and a 1960s economic concept he coined as “copycat economy”. He may have forgotten that Malaysians have a strong tradition, from the days of Tun Abdul Razak till Tun Dr Mahathir, for a Malaysian-made comprehensive solution.

This brought about a series of response that reminded him that the economic uplifting of Malays has not been effective and such a development would result in pressure by Malays to sell their lands. The Q&A had to end but one last audience slipped in to just short of calling Musa a traitor but put his position as a Nationalist in question.

After Musa left, the many of the accompanying association officio were in disbelieved at Musa for putting his head on the guillotine for Abdullah Badawi.

Tengku Razaleigh and the Malay Journey

Where Musa failed, Ku Li did a better job with the audience. On IDR, Ku Li explicitly expressed his disagreement.

Ku Li spoke at a Wacana Ekonomi event organised by the UMNO SS22 Branch Friday night. After his lengthy history of nation building, the crowd persists to ask questions and raise issue well into midnight.

Ku Li started by expressing his surprise that the May 13 book that has been seeking KDN approval for few years received approval for publication now.

Nevertheless, he spoke of the importance of the incidence as a key historical landmark in nation building. It made the leadership realised, the Malays and non Malays, a deep rooted social and economic problem left by the British that could forever disrupt the peace and harmony of the nation.

He said that he was then deeply saddened by the deplorable condition of the Malays in their own motherland. That has inspired leaders and himself, then a young man, to work towards the progress of the nation and ensure it is taken care.

Ku Li described the conditions of the Malays under British rule living a life of subsistence. In their own motherland, Malays were systematically pushed to the hinterland to lead an agrarian life, away from the main flow of development in the urban areas. They were deprived proper education and the access to education was designed to keep the Malays in low paying jobs or clerks, messengers, and gardeners.

Although the immigrants were also exploited, they were much better off and had the opportunity for business in the urban areas and accessible to quality English education.

When British granted independence, the Malays were forced to accept the Immigrant as citizens under jus soli principle. He said it was not practical to return the Immigrants back to their country of origin. Most of them prefer to settle in Malaya and a significant percentage was local born. When he negotiated with Deng Xiao Peng for the request of 300,000 Chinese to return to China, it was denied.

He said there were no Social Contract for the British have always maintained acknowledgement of Malay status and rights as imbedded in all treaties with the British.

Thus, Ku Li said, the Malay leaders were saddled with the problem posed by the naturalised Immigrants. The generally more economically well off Immigrants posed an economic problem for the natives. In addition, majority of the Communist insurgents, the security threat of the times, were Immigrants.

Ku Li said Malaysia is blessed with a leadership, of both Malay and non Malays, that has a responsible attitude to work towards one nation. The Malay leadership understood the Malays support and vigor to seek for Independence that comes with the hope for a better life.

Returning to the May 13 incident, when Tun Abdul Razak was placed as the Director of the National Operations Council at the behest of Tunku Abdul Rahman, he set out to develop a National Economic Policy that is national in spirit and not the Malay Agenda slogan of today. The NEP did not attempt to take from the non Malays but to build new wealth for Malays to take advantage off.

Ku Li explained that Tun Abdul Razak was an inspirational Nationalist. He asked that Malays be attracted to move to Kuala Lumpur to ensure that the nation’s capital reflect the native and majority population of the country.

He went on further to speak of the political development in the 1950s to 1969 and the need to be vigilance in our social and economic program to ensure that the Malay political position is not eroded.

The Q&A was a very lively session with the audience raised a wide ranging of issues on Malay economy, religion and culture. Apart from giving some honest answers, Ku Li also raised some critical aspect of Malay attitude.

The audience was quite impressed with Tengku Razaleigh’s overview of issues that prompted one to ask, "What would you do to solve all these issues?” He fell short of giving a solution and hopeful answers to the problems raised. But, he said “Give me the opportunity, I know what to do” and that drew a big applause from the crowd.

what can be expected from musang hitam.he is just another pak lah shadow.today he's chairman/advisor almost of everything by the blessing of pak lah.