Tun's Reminder on the Spirit of "Malaysia Boleh"

Tun Dr Mahathir, the Patron of the Kelab Kembara Malaysia ("KKM") welcomed the safe return of its President, Dato Khalid Yunos and his team of Malaysian climbers from their recent Mt. Everest conquest at the Perdana Leadership Foundation in Putrajaya today.

Ever since the Dr Mahathir-inspired conquest by M Magendran and N Mohandas of the world's highest peak in 1997, this is already the third group of Malaysian that successfully reached the highest peak in the world. In 2004, KKM managed to get UiTm students, Muhamad Muqharabbin and Ahmad Reduan to reach the peak. 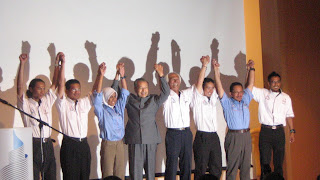 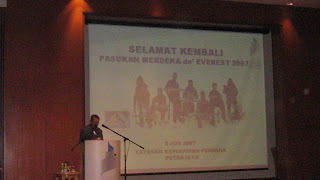 In his welcoming speech, Tun Dr Mahathir gave the audience a reminder of the rationale behind the "Malaysia Boleh" spirit. The slogan serves to inspire Malaysian youth. An inspired person has belief in themselves and the confidence to pursue and achieve anything in their life.

As he recollects his initial reservation when toying with idea of the first attempt, he said success requires one to make initial tries and effort to test to ones capability and potential. That was the underlying message behind the "Malaysia Boleh" slogan, that has since been pun into many cynical versions like Boleh-land.

Tun reminded the successful climbers, who will be part of the youth motivation programs, to stress in their message the need for effort and hard work when asked of their "ilmu" and "petua".

When he spoke of "Malaysia Boleh" is about knowledge and effort to compliment ones "doa" (prayers), he was making a direct reminder to certain segmen of the Malays. Allah will not help those who do not make any effort. This attitude need to be implanted in Malaysian youth, particularly Malays, for without the willingess to take up challenges, youth would fall astray as success in life requires conquering many "peaks."

Tun repeatedly expressed his thank and relief to Allah for there was no casualty. I have observed for a long time, Tun is not overgenerous with congratulation at victorious moments but usually repeat his "kesyukuran" to Allah.

Dato Khalid, who spoke later, described the danger and challenges in reaching the peak. They had a near death incident at the Kerumbu Ice Fault. Even, the final assault to the peak is a dangerous 85 degree inclination climb. Then, there were the thin air or montain sickness. 68-year old Dato Khalid, who climbed together with the team, succumbed to the mountain sickness but respectfully managed to reach the 3rd Base Camp, which is 7,200m of the 8,200 peak.

The video footing of the climb showed later clearly showed the dangers the climbers faced. At the end, the image of RTM Idris Said calling the "azan" left in indelible sentimental mark mixed with a sense of victory on the audience.

"Malaysia Boleh" is about effort and hope (or prayers to the spiritual ones). The way so many unspiring easy way cope out of the current administration in facing up to problems and challenges, Malaysian must ensure the "Malaysia Boleh" spirit lives on!

And no one mentioned Zam or Azalina throughout of the ceremony. Why is that, I wonder? The day earlier. Zam had said there was a group trying to kidnap the Everest success from his ministry. Did he mean Dr M's "group"?

Or was he trying to kidnap the agenda from Khalid and the climbers for political gain?

You don't have to scale Everest to answer that one.