Woah Woman, oh woman, don't treat me so mean,
You're the meanest old woman that I've ever seen.
I guess if you said so
I'd have to pack my things and go. That's right.

Now baby, listen baby, don't ya treat me this-a way
Cause I'll be back on my feet some day.
Don't care if you do 'cause it's understood.
You ain't got no money you just ain't no good.
Well, I guess if you say so
I'd have to pack my things and go. That's right.


A country is oftenly refered in the feminine gender. This song is thus about the disappointment of a country and its people to its leader. A leader who has failed and betrayed the nation and its people.

This song is dedicated to that disillusioned leader foolishly misguided by a bunch of arrogant young punk. If this posting is what MSN reported he said yesterday of "keterlaluan", so be it. It'ss the truth and he has to face it!

Don't give me anymore of your crapy cliches and slogans. I've had enough. It means nothing now. Irrelevent!

You have compromised the country!
You have not resisted but conformed to pressure and prescription from the outside interest.
You have caused more destruction to the faith, race, nation and party!

Hit the road Jack!
Please realised its time to find the door out. Its the same one you entered.

Hit the road Jack!
Please don't come back any more. You can be in Australia. You can be flying in your son's private jet acquired through devious ill gotten way. Heaven's, I do not care anymore.

Hit the road Jack!
Please stop thinking good about yourself. Stop disguising as a pious man facade. Its a fake job. Stop flaunting around with your nice guy. You should remain a nice guy and retired.

Do yourself some sensibility to stop listening to those so-called words of support from so-called supporters claiming to so-called represent the so-called people. They are merely pea-brained imbeciles and opportunist you have been surrounding yourself with. Their presence has no consequential benefit and mere dissillusioning you with their ball lickings.

Do yourself the honour to resign than being the first PM to be kicked out of office! You are just incompetent. The truth to the matter is you have been a Malaysian Disaster.

To safeguard the faith, people, nation, and party, your service is no more required and your so-called "perjuangan" was mere lip service and sloganeering, devoid of substance. Your absence will do less damage than your presence. As it is, the damage of your four years will take more than a decade to repair.

Resign now or you will be remembered in the history for ruining 50 years of re-independence!

Even if one disagree to the specifics or think it's a good yarn, it's worth to read Jeff Ooi's Father-in-Law and Son-in-Law Berhad with link to Steven Gan's An Incompetent Not-So-Nice Guy to Malaysiakini (republish below). There is a fair amount of truth in its main assertion.

It's remarkable that it took this long for some to see the real Abdullah Ahmad Badawi. Then again, perhaps not. After all, his American-style spin-doctoring pulled enough wool over our eyes.

Still, the chink in Abdullah's armour is beginning to show and this has given away his game. Indeed, the prime minister is becoming a victim of his own elaborate ‘spin’.

Increasingly, Malaysians are questioning his leadership when previously few dared to without ending up looking foolish, as Abdullah is still enormously popular. But it's there for all to see - his sloth-like administration, his flip-flopping in decision-making and his seeming disinterest in state affairs. 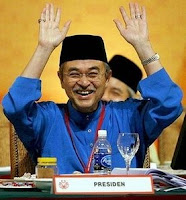 This month, Abdullah reached a milestone - on Nov 1, he marked four years as PM. It passed without much fanfare as there's really little to celebrate.

Abdullah is arguably the most incompetent PM we ever had. He has just sleep-walked his way through his first term.

When he took over from Dr Mahathir Mohamad, he promised Malaysians the sky - he vowed to wipe out corruption without fear or favour, he asked everyone to tell him the truth even if it hurts, and promised to rid the country of racial and religious polarisation.

Surely, Abdullah must be kicking himself now. You don't promise what you cannot deliver.

He should have known that he cannot root out corruption without weeding out the real source - the patronage politics in Umno and its sidekicks within the ruling Barisan Nasional coalition.

Moreover, his dilly-dallying over acting on the Lingam tape and his sledgehammer approach to the Bersih and Hindraf protests are the latest in a string of decisions which have let down many, including those who gave him a huge mandate in the 2004 election.

When he moved into his official resident, Seri Perdana, four years ago, Abdullah might have hoped to emulate Junichiro Koizumi - the maverick Japanese leader who led his party to one of the biggest electoral victories in the nation's history and decisively sacked party leaders who opposed his reforms.

But he is no Koizumi.

Clearly, Abdullah is stumped by his inability to galvanise his own party, let alone the nation.

To paper over his weaknesses, his minders have seen to it that he does not put his foot in his mouth too often on policy issues. When he does give the rare press conference - and it's getting more infrequent by the day - journalists are told to stay away from 'no go' areas.

Worse still, his ‘elegant silence' administration has been hijacked by two self-appointed spokespersons – de facto law minister Mohd Nazri Abdul Aziz and information czar Zainuddin Maidin. It cannot get any worse than this.

Abdullah should realise that his real enemies are not his critics but his sycophants. Indeed, his Achilles' heel is one of his most trusted confidants, son-in-law Khairy Jamaluddin.

Khairy has openly conceded that he needs his father-in-law to ‘protect' him while he plots to take over the country's top job within the next 10 years. He is painfully aware that the moment Abdullah steps down, he can kiss his ambitions goodbye.

For Khairy's plan to work, Abdullah must hold on to his job for at least another term. That should provide this 30-something politician the ‘protection' he needs to climb up the party hierarchy and shore up his political support. 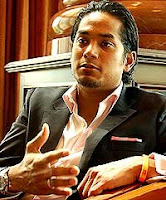 He has one major problem though - with deputy Umno president Najib Abdul Razak next in line to take the reins, Umno Youth chief Hishammuddin Hussein stands out as Khairy's most immediate rival. As Najib's cousin, Hishammuddin is the most obvious successor. This could potentially leave Khairy (right) out in the cold.

So expect Khairy to work overtime to ensure that Hishammuddin not elected as one of the three party vice-presidents in the next Umno polls. With his key rival out of the way, Khairy - who will be installed as Umno Youth chief - will be right on track in his quest for power.

This explains why Abdullah cannot rock the boat too much by rubbing up the party chieftains the wrong way - hence, his uninspired leadership.

So Abdullah is no Koizumi. But at least, he can be Habibie.

BJ Habibie was the accidental president in post-Suharto Indonesia. In the one year he was in power, he initiated poll reforms, liberated the media, free political prisoners and let East Timor go. Not bad for a colourless technocrat.

Abdullah could still be the bureaucrat to bring similar reforms in Malaysia. That is, if his son-in-law allows him to.

Comment:
Perhaps, many would not have similar concerns with that of Steven Gan's. Nevertheless, all Malaysian have each their own. Pak Lah's leadership have miserably failed to sensitized, if not address, the concerns of ordinary Malaysians concerns.

Pak Lah has demonstrably shown he is incapable of pre-empting problems from overblowing into a bigger mess. Just observe his slow responses and delayed announced positions on challenges to the Constitutionalised Social Agreement (Contract), inflation and the spiraling price of goods and services, Economic Corridors development plan, and many many more matters.

Many segments of society have lost patience and are uninhibited to air out their grievances. Despite the illegal status and shortcomings in the demands of all the rallies held thus far, there are evidences to suggest that these rallies became the venue for public dissatisfaction. Apparently there are those that march for purposes different from each rally's purpose. 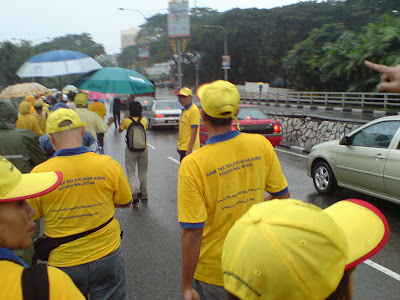 The yellow march attracted protestors concerned with foreign insurption in the administration (Click the picture above to see the back writings of this non Bersih yellow shirts). Its believed that the rally attracted UMNO members and retired servicemen too!

Despite the claimed "racist" and "seditous" demands of Hindraf (read Rocky Bru's here and here and A Kadir Jasin's here), the Hindraf rally attracted non Hindu protestors giving support for their right to assembly and sympathisers for the disenfranchised poor Indians (wait for my scorecard in my next posting).

Pak Lah have ignored and failed to pre-empt all these grumbling on the ground. Despite claim for being a PM to all races amongst his flood of taglines and immediately attended a fertilisers subsidy handover event a day after the power handover in 2004, his lackadaisical habit actually reflect that he is not sensitive to the plight and concern of the peoples as he project and claim himself to be.

Blogger Si Bongkok Tanjung Puteri concluded here that Pak Lah inability to practise and handle the openness policy he promoted has caused more problems. Its not the openness policy that is at fault, its just his "plain jane" incompetency. Delve into every other claims of his, its guarantee to show his inconsistency and contradiction.

Blogger Politica was already on a resignation call since last Friday here. He or her's assertion shows many similarity. It's Pak Lah's contradictions and Khairy Jamaluddin (and son's business partner Patrick Lim).