Its a Bloody Long Four Years!

Abdullah bin Ahmad (bin Badawi) ascended to the post of Prime Minister of Malaysia on October 31st, 2003. Since then, its been terribly a bloody long four years.

TV3 Primetime News yesterday televised at the Malay Rulers Durbar (read Wikipedia here to know what it is), the Royal Highnesses The Malay Rulers presented him a cake. If there is still any ounce of common sense within him, he should understand that the cake is not to commemorate but to send a message. The least being a reminder that they are aware of his four years premiership and sufficient time and chance given to prove his mettle.
It's a tedious and cumbersome effort to write about a man not only with an endlessly long list of follies, but the list still grows by every other words he utters, every other gestures he does, and every other thoughts of him one hear of. Its frustating to even attempt to further translate into words the weakness of his character, the messiness of his leadership and administration, the hipocrasy of his words, act and image, and just plain incompetence.
Thankfully there is this poem from a comentator in Tunku blog here to help describe.

This is a story about Malaysian society
Where the different races supposedly live in harmony
In 2003, came along a PM by the name of Badawi
Who led his party to a resounding election victory.

This is a PM whose promises are many
All his slogans are equally catchy
As a result, many people are taken in completely
By his humble and Mr. Clean personality.

First among his chief promises is to combat corruption immediately
That has everyone applauding loudly
But until today, all the major cases are still one big mystery
Lack of evidence or is he fooling us secretly?

Not long after, he introduced Islam Hadhari
Some complained there is only one version of Islam from the Almighty
Anyway, what is it all about, no one knows exactly
Except for some broad points outlined in theory.

Then, he said we need to cut our budget deficit quickly
Which started the dismantling of Tun M's legacy
This caused us to hear about the crooked bridge flip flop story
With all the accusations, what is fiction and what is reality?

By his own admission, his son is extremely wealthy
Because he controls a listed company by the name of Scomi
Was once implicated in the shipment of banned components to a Middle Eastern country
But his son claimed ignorance and that's the end of the story.

He also has a son-in-law by the name of Khairy
Not elected but is UMNO Youth's deputy
Got entangled in the merged Avenue-ECM Libra entity
Which happened right under the nose of the PM-led Finance Ministry.

Then, we came across a foreign newspaper reporting factually
Of his adventure to see a yacht at a faraway place somewhere in Turkey
This is not true, he said insistently
But I don't see the newspaper issuing any apology.

Next, came the jet on the itinerary
Bought or leased, he is lucky that Malaysians are not financially savvy
The jet is also for the Agong's use, he said publicly
I wonder whether the Agong requested for one specifically?

Later, we read of his holidays in an Australian city
Staying in a mansion owned by someone whom an old man named as Patrick Badawi
We shouldn't be so critical if he was only away temporarily
Except for the fact that there was a major flood in our own territory.

Then, we get the case of Proton disposing off a subsidiary
Not for a large amount but for a mere penny
Many think behind the deal something's very fishy
Tun M's pet project is certainly going awry.

Overall, crime rates are going up highly
Confidence in our police is at its lowest historically
But the IGP got his tenure extended easily
He must be thinking everything's hunky-dory.

He has also been busy launching economic regions lately
Trying to attract foreign investments into the country
Sadly, some are saying that the northern development is benefiting a crony
While others argue the southern one will end up as LKY's colony.

You see, I can go on and on about this indefinitely
Because it is easy and I do not need to create any of them individually
They are all plucked from the web where the stories about him is a plenty
From promoting judges unfairly to always being sleepy.

Actually, I am just an ordinary Malaysian who cares about her country
And I have to state that I am not against him or his policy
For I do not care who is the Perdana Menteri
As long as the person is capable and thrustworthy.

For a thorough analysis of his four years, read Biggum Dogmannsteinberg's very long post, It's been four long years ...

With Abdullah, much hope, yes hope, was placed upon him to consolidate and put a human side to a fast developing Malaysia. After 22 years, Malaysian was ready for a new person at the helm. No more that dictator, some would say. 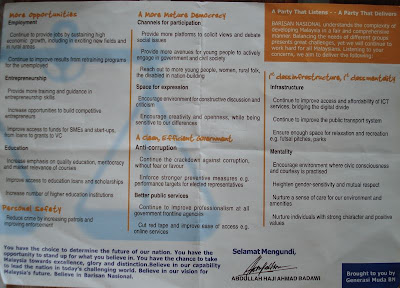 Alas! Immediately upon the landslide 2004 general election victory, his true self began to appear - not that of the public image he cultivated or the promises he made for General Election.

The pre-ECM Libra-Avenue merger corporate moves was the early indication that alerted me, if the imprisonment of BSA Tahir under ISA earlier had by passed me. After all, everyone, me included, was lost in the jubilation of a new leadership and the excitement of a new broom. Since the ECM Libra Avenue debacle, many more surfaced and it's been an endless flow of disputable decisions and actions.

Some say he is quite aware of the happenings and feedbacks on his people, and himself. Some say he is insulated and keeps himself so as to hide from colleague, friends and public of his incompetence and dependence on his children and son in law. The apologist amongst his supporters would say he is not aware and it is the working of others. In the words of the entitled Pink Floyd's song, whatever it is, he has grown Comfortably Numb with his ways. The Beatles must have had him in mind when they recorded in 1965 the Rubber Soul album's song ....

He's a real nowhere man,
Sitting in his nowhere land,
Making all his nowhere plans
For nobody.

Doesn't kave a point of view,
Knows not where he's going to,
Isn't he a bit like you and me?

Nowhere man, please listen,
You don't know what you're missing,
Nowhere man, the world is at your command.

He's as blind as he can be,
Just sees what he wants to see,
Nowhere man can you see me at all?

Doesn't kave a point of view,
Knows not where he's going to,
Isn't he a bit like you and me?

Nowhere man, don't worry,
Take your time, don't hurry,
Leave it all till somebody else
Lend you a hand.

He's a real nowhere man,
Sitting in his nowhere land,
Making all his nowhere plans
For nobody.

If UMNO was able to fight the British against the installation of Malayan Union in 1946, one wonders now did they really do so then. Where has that tenacity to fight and struggle (berjuang)? Perhaps, one may today wonder if such a sense of struggle really exist. It appears to have lost it forever.

Despite grouses coming from the grassroots, has UMNO leaders lost its sense of purpose? Are they that easily numbed by the trapping of position, money and what comes with it? Are they gullible enough to take in hook, line and sinker the excuses spewed by leadership and its propaganda machine? Are they numbed and inresponsive to the predicament of the people and country? Have they cared less to the future of our sovereignty that they seemed willing to outrightly support those covorting with thy enemies?

Yet with such state of the country, people and party, there are willing apologist defending this pathetic-ness. One wonder what makes them disillusioned into believing that they are doing a patriotic act to defend an institution and country and not a dunce in leadership with mediocres as supporters, novice as advisers, and gluttons as son and son-in-law.

As Tun Dr Mahathir said, "We deserve the leadership we have chosen". Some may have hated him for whatever perceived past. Whilst, some may have missed and prefered his described benevelont dictatorial ways. Do we just dwindle and complain of the past? Do we spend our precious time laying blame, spend more time with retaliatory responses, and back and forth arguing over it? Whatever, I am not willing to waste my time for such wasteful endeavours of mere conversations. Perception of unfair, arrogance and undemocratic for my refusal to listen is unimportant now (sorry...).

Tun's words eschewed much truth, lots of it. Perhaps, its our own mediocrity that elevate such mediocre to an improper pedestal.

The past is for historian to ponder over and for doers not to delve any more. More so, when "how" is more pertinent than being accurate about the past "why". Something need and can be done now rather than engaging in endless discourses. Something need and be done now than bearing to shoulder consequences from the continuance of such mindless and shallow state of affair.

If such obvious state needs convincing, I have to apologise that I am not wiling to spend time to teach and instill some critical thoughts. It's just unfortunate that blind loyalty and perpetual leadership remains part of the living vocabulary of many.

It's just a pity that many would succumb to place their belief in a leadership surviving on other's effort in the past but pass up as their own; leadership floated by mere perception, distraction of attention, and rebranding / repackaging; and leadership totally lacking in any substance.

It is timely that UMNO make a decision and now to remain relevant. Lest, we wish others to make that decision for us. If we are to believe that our ideology, practicality and ability to govern will provide that balance of unity for progress, then something need done now!
at 11/02/2007 11:50:00 AM

Excellent and timely post, bro'.. Missed your insightful analysis and also your presence for some time.. Too bad couldn't meet you when me and Shah cakapje (talkonly)brought Kerp along. Heard you were under the weather.. Hope all is well now. Glad you're back!

Its sad that very, very few Malaysians even remembered that 31 Oct 2007 was exactly FOUR YEARS!

The memory should serve as a report card and be told that common nobodies are not happy how things are going.

Site builder said...
This comment has been removed by a blog administrator.
5:38 PM

Chee/Hawaiichee - Spammers are not welcome.