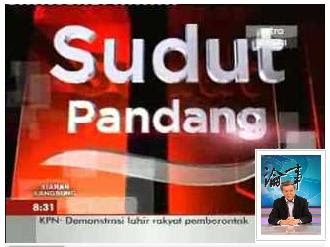 IJN is the nation’s premier cardiovascular disease treatment centre. As I’ve said before, it is one of those national institutions that have done much to improve the government’s public image. It projects the image of Malaysia Medical professionals that when given the right environment, they can be top class too.

We must admit that IJN has done well despite all constraints. I’ve been given to understand that annually, IJN treated about 150, 000 patients of which 70% are government servants.

In short, it provides healthcare services to the poor and for those who can afford to pay; they pay at a more competitive rate.

Every year, the government spends about RM10 billion of healthcare services for this country. I am not even talking about government expenditure per year for development. What the government collects is just a paltry sum of RM200 million.

Healthcare services is heavily subsidized. I for one believed that in the long term, this is not a sustainable option and one of the options is to introduce Healthcare Financing Scheme, which I tried hard to push when I was the Minister but got boiled down by bureaucratic red tape.

Hence, it never sees the light of the day.

IJN is heavily subsidized by the government. About RM200million a year is paid by the government to IJN in order to provide affordable services to the poor and government servants. (My source differ on this figure but who are we to argue with a former MOH)

While this is not a small figure, the goodwill generated by the government to the rakyat is tremendous. Politically, the impact is huge and when compared to the National Health budget; it is only about 2.5%.

Now, we are confronted with what looks like a done deal that IJN is bought over by a GLC company.

I’ve said before and I will say it again, almost all privatized organizations are often not done the way that it should be done.

To ensure that the private sector’s bottom line is taken care of, Sime Darby’s acquisition of IJN stakes will not go down well with the rakyat unless the social responsibility of the government in affordable healthcare services is taken over by Sime Darby as its Corporate Social Responsibility (CSR).

Hence, it is important that Sime Darby continue to discharge the duty of the government for providing treatment to the poor and government servants despite after it has been privatized.

The Health Minister’s promise to regulate the fees sounds hollow since the private hospital’s fees are also regulated but we have heard of horror stories of exorbitant fees charged by private hospitals.

I had openly raised this when I was the Health Minister of the commercialization of healthcare and hence, its bottom line becomes crucial to private sector. Often, the poor patient is at the receiving end and the government’s regulations become a toothless tiger.

So, I hope that the government will reconsider its decision of privatizing IJN. If it so decides to proceed, please do not neglect the poor and government servants. We will lose a lot of goodwill and votes to BN if not done properly.

Whatever promises made by the greedy chairman of Sime, we know what will happen if IJN is privatised.
Usually patients will be "advised" to go to the private wing becos your sickness can't wait. "If you want to be in the public wing, you waitlah for your turn to be operated.. only critical ones will be attended to first. I would advise you not to wait and suffer" and at the end of the day due to the "advise".. you need to beg, steal or borrow to go to the private wing to get heal fast. This happens and will happen in public hospitals with private wings. Who wants to suffer and prolong their illness? In the end, even govt servants will have to borrow from the kooperasi to be warded in private wings.

This is the scenario I will foresee if IJN is privatised

I really like the seasons greeting banner! Very bodacious. Happy Holidays to you and all your loved ones, bro.

51 % gives them absolute control, while 2% less is only majority (assuming there is no other bigger shareholder) control.

BTW, Musa Hitam has spoken on the matter.

Says "Sime will improve IJN" and that the low income and pensioners will not suffers.
(Paraphrasing Star's report, here.)

That would leave a whole lot of others out in the cold to suffer.

Let's just watch carefully, as things have the tendency to slip through the back door quietly.

listen to what he says. its about goodwill and vote. thats the equation. Did he ever wonder the humanity part of it? typical of soul-less member from MCA.

Isn't he too late to make this stand?

Or is this another part of damage control.