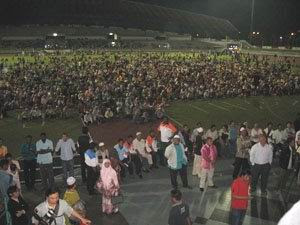 Anwar's Wednesday nite rally at Kelana Jaya only gathered 4,000 attendents
AFP report and a Cyber1trooper's blog posting dated yesterday saw a different tone from the strong denial, divertionary tactic, and conspiracy story one is accustomed from Anwar and his supporters. The AFP reported Anwar surrendering to the fact that he will go back in. Cyber1trooper reported PKR strategist, Saifuddin Nasution and Nurul Izzah expressing the same tune.

There was supposed to be a hearing of the defense application to request the original evidences yesterday. However, the mainstream only reported on their appeal to revert the case back to the Session Court.

The change of tone is likely to mean copies of evidences already provided to Anwar are convincing and the defense is without a reply. The request for original documents only serve to buy time. Anwar is changing the tone of his propaganda to play victim.

His aggresive approach is not working. His conspiracy game is not working and is well pre-empted with information by such blogs. Last Wednesday nite rally is a clear indication that support for Anwar is fizzling out. The 100,000 drummed out only had some 4,000 appearances.

In fighting and frustation is emerging everywhere in PKR.

DAP's mentality is still not out of their opposition shell, despite taking charge of Penang and at one time Perak. Their chauvanistic and repressive tendencies is rearing it's ugly head in Perak, Selangor, Penang and latest Kedah.

In the meanwhile, Ketua Pemuda PAS and Naib Ketua Pemuda UMNO has already agreed to meet for a debate. It would serve to move the two group closer.

A significant number within PAS leadership believe Anwar is guilty on the latest sodomy charges. With Anwar's political career look set to end, win or lose, PAS is looking beyond the Manek Urai by-election. Do not discount that the latest PAS theatric is to only win Manek Urai.

Everything around Anwar is beginning to crumble. He is left but without any choice but play sympathy to sustain support for his fight.

Will his team and new entrants like Zaid Ibrahim able to carry the mantle of his fight?

Things will unfold soon. But is UMNO ready with a truly creative and convincing change agenda able to negotiate and balance the competing interest?

In the meanwhile, read the AFP report below:

Anwar prepares for the worst

Opposition Leader Anwar Ibrahim, who faces trial this month on sodomy charges, said his Pakatan Rakyat alliance would survive even if he is convicted and jailed. Anwar has rejected the allegations levelled by a 23-year-old former aide as a conspiracy to derail his plan to topple the government.

He was found guilty of separate sodomy and corruption charges a decade ago in a case widely seen as politically motivated. In 2004 the sodomy conviction was overturned, allowing Anwar to go free after six years in jail.

“There is no question of the Pakatan Rakyat continuing, surviving. It will continue to defend the rights of the people and challenge the government, gaining strength from any conviction made against me,” Anwar told AFP.

“In fact I think a conviction against me will enrage a lot of people,” he said after a political rally late Tuesday.

“I am ready for all eventualities and prepared to face attacks – expect the best and prepare for the worst.”

Anwar addressed a crowd of 4,000 supporters in a stadium in Kelana Jaya in a two-hour rally organised by his opposition alliance to show their solidarity for him.

He could go back to jail

Anwar’s PKR party has joined forces with the conservative Islamic party PAS and the Chinese-based Democratic Action Party in an alliance which gained unprecedented ground against the ruling coalition in national polls a year ago.

After seizing control of a third of seats in parliament, it is now vowing to unseat the Barisan Nasional coalition – which has ruled Malaysia for half a century – in the next general elections. However, Anwar’s political success story has faced a formidable challenge with fresh sodomy allegations that could see him jailed for 20 years.

The sex act, even between consenting adults, is illegal in predominantly Muslim Malaysia. Anwar’s trial will begin on July 8 and he has already said he fears he will not get fair treatment. - AFP

This is very difficult for me but with all sincerity I have to admit that yours’ is one of the most rational voice in the blogosphere when it comes to ummah interest.

Deep in my heart I pray that TGNA will come to his senses soon as nothing there is for PAS to cling on to PR. Yes we are looking beyond Manik Urai and do not discount TGHH’s unity government idea. The pemuda discourse is just another way to skin the cat.

I pray that when the next Ramadhan arrive, TGNA will be readily accepted by ALL Malays along TGHH. The same goes for my ADUN YBNN (Please join PAS for the sake of our ummah).