Be firm against anyone turning Teo Beng Hock death into May 11, 12 1969 procession 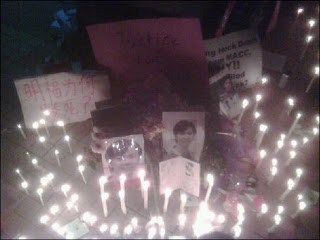 My sincere condolence to the family of the late Teo Beng Hock (Pix from SK here)
Since Sunday, I have not done any blogging. My limbs are still not capable of sustaining much sitting and typing. But the strange death of Teo Beng Hock is too overwhelming an incident for me to just sit and watch.

I am posting this blog while enduring the lingering pain, but it helps release gian with an overdue blogging fix. To my readers, particularly those working at Mercu UEM, I have not forgotten my commitment to write an article or two on the current state of UEM Group. And there are still issues to be written on UEM Land/IRDA, Pantai, MAS, Khazanah, UniKL, etc.

The manner DAP is drumming up angry emotion amongst the public, particularly within the Chinese community by making wild accusations towards MACC and Police will blow the incident out of proportion.

Upon knowing of the incident, Lim Kit Siang and his DAP cohort had immediately lay blame on MACC to equate it with Kugan's death-in-custody case. He belittled the MACC raids few days ago, accused MACC as outside the law and made fun of MACC statements in his Twitter message. Quickly DAP conducted a vigil outside MACC office last night.

Few days back Malaysia Today highlighted a Suara Keadilan article by a Chinese writer calling MACC raid on Selangor Excos and ADUNs offices as racially motivated move. Such claim only raise my temperature and bring trobbing of the veins in my limbs.

Why no such issue when MB Tan Sri Khalid Ibrahim's office was raided several times? Is the writer and DAP implying only Malays (I donlt care what political party they are) corrupt and Chinese not? Answer me, which race is THE player in big time crime, underworld and vice activites?

My hunch says that the death of Teo Beng Hock could turn into a racial incident that could build up into the preportion of May 13, 1969, if sensible head do not prevail and authorities are not firm.

The Chinese community should remain calm and not be emotionally swayed by the politicians' instigations. DAP and PKR troublemakers are relentlessly trying to steer public attention away from their own problems.

There is more than meet the eyes.

To recall back to that sad past, the incident that spark the May 13, 1969 incident was the Malay bashing procession on May 11 and 12th, 1969. The root cause leads back to the the days Singapore was in Malaysia and PAP and Labour Party racial instigation behind many racial riots throughout the country.

The Malay could not hold their patiance any longer to the rude insult hurled at them during the procession. In addition, the years of relentless demands by the Chinese awakened the Malays to their own socio-economic situation and a pent up anger was also bulding up.

The Malays retaliated on the evening of May 13, 1969 on hearing rumours of Malay death at incident in some part of Kuala Lumpur.

I hate to say it in the open. The elements, but not necessarily all the elements, leading to May 13 1969 are there. Verbal racial exchanges are common. Other than Hindraf, there are already few unreported racial skirmishes. One stupid incident could make the situation into a racial flare up and it will spread like a forest fire, believe me.

The public and parties must be judicious and rational in their response and reaction. It is not time for politicking.

Everyone is curious and concern about this death but the simplistic and immediate manner by DAP leaders to lay blame on MACC is suspect and irresponsible. All one need to do is to trace back to the events leading to MACC raids and today's death.

It started out with Azmin Ali calling for a revamping of the Selangor state Government. DAP's response to Azmin's genuinely sincere call was defensive.

Realising the poor response by Theresa, Ronnie Liu challenged and Azmin requested Wee to expose the said Exco member. Wee will do so at the right time.

Wednesday, it was reported that offices of two Selangor Exco members and several ADUNs were raided by MACC. One of them is DAP exco Ean Yong Hian Wah whose political secretary is the decease Teo Beng Hock. 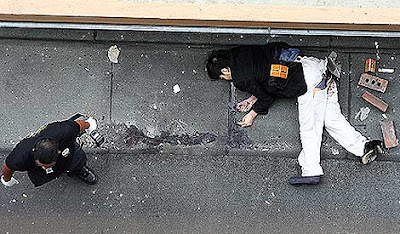 And yesterday, Teo was found dead and reported to have jumped out of the 20th Floor of Plaza Masalam, where lies the MACC office.

To response to DAP's accussation, I find it hard to believe an MACC official would resort to throwing someone out the window to extract information in interrogation. It will only look bad on MACC if anyone was brutally hurt or died under their watch. They are not dealing with hard core criminals but white collar crimes.

The death of Kugan, the manner the activist and lawyers manipulated his remain, and turn the criminal's death into a spectacle to smear the good name of the Police force is still fresh on everyone's mind.

It is unMalay and disrespectful to talk negatively of a person who just died but public interest must supercede cultural ritual.

So I'll not talk of the ritual and practices within the culture of organised crime which I have extensive reading on the subject of Mafia, Yakuza, Triads, etc. Nor will I share my socio-cultural analysis of DAP.

Do allow me just to pose the question: What transpired in the MACC office between Teo and the MACC officers? Is Teo linked to all said in the past one week in Selangor?

That will be all.

You are right that people will get angry but you are wrong that it will be racial. I am not even Chinese and I am mad as hell that a young man lost his life this way. The only way the Government can resolve this is by an urgent impartial investigation into the matter.

By the way, why the double standards by the MACC in not investigating the rapid use of the state allowance in the few months that BN had in Selangor in 2008? I'm not asking you to answer this. The question is just rhetorical.

You are an Ass Hole

Don't turn it into a racial issue! Surely something must be done to have some form of accountability of MACC's approach. They should not act like Gestapo!

Those drugs are known to damage kidneys Sir.

Do sayang yourself as you sayang truth.

..by and large, I dont have very much regard for politicians..more so on anwar and the rest of the opposition..including TGNA..it is politics for politics' sake..and be damn the raayat..as is in this unfortunate incident, it is too much to ask them to have the good sense to refrain from turning it into a racial incident..for since when has the opposition shown that ability?..

This is the time that Hishammuddin as Menteri Dalam Negeri should prove that he is worthy of the post. He must now show courage under fire to make the right decision to ensure that peace and common sense prevail.

I agree with you bro that DAP is going into town with this tragic and unfortunate incident and this time they are not shy to make it a race and political issue either. Gunpowder in keg stuff and ready to explode if not immediately contained by the PDRM.

By the way bro, get well soon OK.

Get real, this is not about race but a life is lost. It unbelievable you can spin it that way when what was asked is just a fair investigation. Do you think just because a life of certain race is lost than the issued only affected that race...Malaysian lost a very capable young man irrespective of what your political believe.

Why MACC hasn't investigated Khairy Jamaludin, Ketua Pemuda UMNO who has been found guilty of corrupt practices by Majlis Disiplin UMNO? Why investigate only one side? Am sure you cannot reply this even though you do not like the boy and you wouldn't want to defend him....It is clearly selective, brother...

I agree with your statement here..

No one is making the death of Teoh a racial issue any more than Kugan's death was seen an Indian-Malay clash.

But that's what you are trying to do. Anytime someone questions PDRM or MACC people like you have to start talking about 1969 and racial clash.

I don't like your blog title on this matter. If PDRM and MACC behave unprofessionally, stupidly and with poor PR, any Malaysian has the right to criticize them; it is not some exclusive right bequeathed to Malays in any Constitution!!

I am not a Chinese but am still shocked that such a thing could have happened and that the
statements and claims made by the MACC defy belief. The fact that Malay officers are involved is of no concern to me or anyone except you who is making a big hoo ha over it.

You UMNO bastards truly wish the PR will give you the chance to start another May 13. Not this time asshole. It is 'War of the Running Dogs' all over again. The difference is this time we know who the real running dogs are. This time the targets will be the corrupt interest of UMNO and winning the minds of the people in the urban areas for this is where the real fight will be as more and more people move to the urban areas. The present economic downturn is only accelerating this demographic shift. See you on the political battlefield asswhole.

You just like to hint that everything is racial?
Or you are racial from your hinting?
The fact still remains that a young man is dead.
He is some body's son, husband and could have been some child's dad.
He is a friend and colleague>
Why should he be dead?
He committed no crime and not even suspected of having done so.
So why subject him to abuses for long period till late hour. How many people will not feel intimidated by such treatments?
Now he is dead and MACC is blameless? People should not feel anger? Why accuse them for roiting like 1969? Frankly you UMNO whore it was UMNO who precipitate the trouble in 1969!