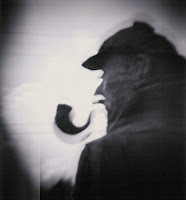 In my morning posting, someone called me ass****.

They are so unhappy that I do not support their accusation on MACC?

They may have been upset that I caution against irresponsibly making this issue political and racially slanted?

I was accused for spinning. Where was the spin? Is raising caution a spin?

I ask further, the murder just happened and Pakatan Rakyat can judge it was SPRM? Why the diversion and association to PKFZ and Dr Khir Toyo?

By the way, Sherlock Holmes never said Elementary My Dear Watson. In fact he is just a myth from a book written by Sir Arthur Canon Doyle. That means solving this crime would not be that simple.

Can the opposition supporters be mature? Aiyeahh ... how to trust them to administer this country? They are predictably irrational, emotional and full of bull.

The victim came to MACC for interrogation at 5:00 pm the day before. He was released at early morning 3:30 am yesterday but claim to have slept over at the waiting room till 6:00 am. The body was found at around 1:30 pm yesterday. The story was doubted here.

There are evidence of torn trousers on the body and some history of MACC abuse. That's it all you have now, Sherlock wannabees.

It is definately not made simple with Pakatan Rakyat trying to play the blame game and political psyop. They forgot they do not have credential to call others of commiting crime.

Their leader is an undisputable ex-convict found guilty of abusing power to instruct police to "gempaq" Umi Hafilda and Azizan Abu Bakar to "turnover" their sworn statement.

Good thing he is on the other side now. Go ahead and sue me for RM100 million, Anwar!

Since Sherlock is a mere imaginary figure return by Sir Arthur Conan Doyle, all you Sherlock wannabees must fit the evidences with few senarios. Here are few interesting senarios:

But to pin a suspect in court, we need hard motive and evidences "beyond reasonable doubt". The "burden of proof" is on all you Sherlock wannabees. Unless you have it, don't f**king accuse anyone.

Or maybe you should just worry about your own ass. The prosecuting team got forensic proof and you only get the slides, dude. They have got CCTV and some 30 witnesses. You only claim to have 5 witness. I hope your witness understand perjury.

I actually prefer the Unspinners' story. It makes more sense than MACC killing him - which is motiveless!

Although evidence was fit to the story :P, I still like the drama potential of Unspinners :D!!

It is the distrust in such agencies as the Police and the MACC, justified by past and present behaviour, that has brought out this kind of response. The best thing the govt. can do now is suspend the head of the MACC, together with the officers involved in the interrogation, pending further investigation. This must be a first step to restoring faith in our law enforcing officers.

The best written on this issue today.

So many speculative scenario lah, and I would like to add one more. Could it be that maybe (one more time maybe) there are incriminating photos/videos of someone's sexuality in the deceased laptop - like an adviser of a political party sucking cock and buggering an assistant? Or maybe photos of an exco member also sucking cock of an ex-boyfriend, another leader of the same political party?

So who's interest to have the deceased dead? With connection to the underworld (Great Uncle Ronnie), this is a strong possibility. Speculation people, just speculation!

and these legmen are also quick to believe big brother

Congratulations on being onsistently the racist, insensitive UMNO bastard that you are.

thks for visitng my blog. i need stupid as****le like you to spar with.

Can't blame the conspiracy theorist as report after report of MACC behaving like thugs came under deaf ears of the police and also the PM.

Now a person has died... no wonder it has become a political issue. How come MACC has unlimited powers... that should be the question.

ajimsan said...
This comment has been removed by the author.
9:52 PM

Vinnan
Hindraf Tamil Tigers are the racist one. You pariah!

I am the one who said you are an ass hole. I am not afraid to say that as I am no longer a Malaysian and living in a country where things like that do not happen. We have what we called civil rights and no bullshit racism. I am intelligent enough to know that MACC works for UMNO big brother. Please do not spin any bullshit stories.

Wonder what his cryptonite is

But his blind followers will definitely jump to his defence

Many make their apprearance here uninvited and unwelcome

cursing and accusing, frusrated and pissed off

and yet coming back again with the same modus operandi

life must be terrible for them

Dei Vinnan S.O.B - I've got this to say... Bark all you can but once a PARIAH will always be a PARIAH DOG! If you can't give good comments don't talk Cock. Shit face!

rumour has it, one of the reason for MACC called him because of the Malay Reserved Land issue.

You might want to check this one out or better, all the sherlock wannabees might want to dig deep on this. I ain't no sherlock but this might be one important clue.

Haha @ your last comment Voice. Show vinnan you have some class :).

You know what makes this episode so frustrating? MACC couldn't even be bothered to install CCTV. It would have instantly cleared their names and prove LGE wrong.

An analogy is like taking down meeting notes. Meeting notes can implicate you were at fault or help you clear your name.

if the incident of 'undressed sleeping photos' can be conveniently blamed on BN, then this tragic incident can surely be 'goreng' into something more than your mind can take. although the cause of this tragedy is not clear yet, but the beneficiaries are quite obvious. at least less people are talking about the 'underworld' now, don't they?

The biggest idiots are those who somehow accuse Umno of murdering Teoh! What possible benefit would Umno get from doing so??

Anyway, I don't think it's "Murder" or "Suicide" but an "Accident":
Did Sleepwalking Kill Teoh?

Blame it on MOSSAD and our southern neigbour secret agents.

NO MORE EXCUSES !!! Overhaul MACC to direct report to Parliament instead of Jabatan Najiz !!!!

Another Custodial Death !!! A men about to get married had no reason for suicide !!!!
Someone must hv thrown the men from high floor !!!!

Reminds us the shocking incident involving the body of a Mongolian lady got blown up 3 yrs ago !!!!
What a great way to commemorate Najiz 100 Days in power !!!!

Government machinery are all serving as a tool for UMNO BN !!!
From executive to judiciary's Zaki Azmi, AG, Police, MACC, EC and even exploiting the Monarchy, UMNO held it all from top to bottom & inside out!!!

any ideas where is wee choo keong , he was supposed to be interviewed yesterday ?
rumours and theories..he is now under police protection …seemed he is the double agent,,,what was he doing before he had a chance to stand for election? he was never a practising lawyer..after he was sacked from d a p..he was unemployed for many years.how did he survive?
he was on some body pay roll …until the general elction…he sneaked into p k r camp ..at that time , p kr was short of candidates…n wasnt sure of their chnaces.. wee choo keong was lucky ..but…now it is pay back time to serve his masters!

why did wee choo keong claimed d a p has corruption when he can call direct to the menteri besar? why he played it up ? does he has benefits?

yes.by stirring shit,,he get publicity…with this he can negiotate for higher post with the party..then at the stage , he can leaked n spy for his masters.

everything under the sun points to UMNO as the culprit

perhaps there really is a political agenda somewhere

good to have the truth out