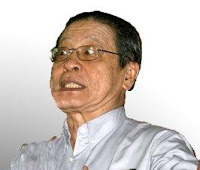 The death of Teoh Boon Hock has life threatening implication for DAP.

For the past four decades, they have been making wild accusation on Barisan Nasional one after another. If Teoh' death expose serious wrong doing in DAP, it will look bad on DAP.

They only tasted power for only a year and yet are already abusing power and indulging in corruption. The voters will not only not trust to give power at the Federal level, but will end up losing more already secured seats.

Thus, the finding of the death of Teoh can have serious ramification on DAP.

Desperation can be seen in all DAP's actions and reactions. They attempted to accuse MACC for selective persecution but was easily rebuted by facts and figures from MACC. Malay Mail reported the rebuttal.

More lies of Lim Kit Siang will be unravelled.

Without awaiting police investigation, they claimed that Teoh is murdered by MACC. That is illogical when considering that he is a witness and cooperative during interrogation.

Realising that allegation could be dispelled easily, they openly refused to accept any police findings to say it is a suicide. Why?

Suicide would look badly on them. It is not logical for Teoh who is due to register his marriage to his two month pregnant fiance would want to commit suicide. If he did die of suicide, the reason for suicide would be damaging for DAP.

Pressure is on DAP with accusation of underworld relation. The public and blogs are suspecting Ronnie Liu and to a lesser extent Ean Yong Hian Wah and Tan Boon Hwa as having underworld ties and as likely suspect in the event it is murder.

To relieve pressure, Lim Kit Siang demanded for a Royal Commision of Inquiry and he got it. That came unexpectedly and he had to find excuses to further demonise the Government. He now insist Tunku Aziz to head the RCI.

With Tunku Aziz no more non partisan and DAP cannot be trusted to be rationale on this issue, that will not happen. A truly independent members of the RCI is better.

Lim Kit Siang also made an accusation that MACC are doing selective persecution. He was rebuted by Rocky's paper Malay Mail. This was published yesterday:

What selective persecution, Lim? More BN politicians than Pakatan hauled up by MACC

THIS year alone, the Malaysian Anti-Corruption Commission questioned more than 20 Barisan Nasional politicians and less than five of their Pakatan Rakyat counterparts over allegations of abuse of power and money politics.

Of the 20 from the BN camp, five are high-profile politicians. MACC has also charged several BN politicians, including first-term Lenggeng assemblyman Mustafa Salim, 50, who faced three charges of corruption
in May.

In January this year, Beruas Umno vice-chairman Azman Noh was charged at the Ipoh Sessions Court for offering bribes to ensure that he was voted in as the division's vice-chief.

BN politicians questioned by MACC this year include former Tourism and Sports Minister and ex-Puteri Umno head Datuk Seri Azalina Othman and former Selangor Menteri Besar Datuk Seri Dr Mohd Khir Toyo. It was also learnt that one BN politician hauled in by MACC was questioned by officers from 8pm to 6am.

These are the statistics that Malay Mail had obtained based on our research into MACC's list of activities for this year.

No politicians from Pakatan Rakyat have been charged yet.

It is also learnt these findings are being compiled by MACC in their bid to refute allegations that it practised selective persecution of certain political parties.

His father, DAP national chairman Lim Kit Siang, during Teoh's funeral in Alor Gajah, called on Prime Minister Datuk Seri Najib Razak, to "stop the MACC war against Pakatan Rakyat and direct it to return to its original purpose of declaring war against corruption".

I think the public should also has the right to demand a Royal Commision of Inquiry to investigate the possibilities that our DUN and MP(either from BN or Pakatan Rakyat) are having links to the underworld organisation.

Just comparing the numbers of people being investigated and prosecuted from each side is not a good enough indicator. Statistically it prove something but fail to highlight other possibilities such as:-

1. More BN leaders are corrupt, both in numbers and percentage.

Yes, Kit Siang may look silly because many of his accusation can be rebutted. It is also silly to measure fairness just by looking at the number of investigation and prosecution.

Sure lah! Small stupid UMNO frys get caught! And stupid Pakatan too!

Why should Khir Toyol be corrupt. He is rich already. He got castles and wealth. Surely no need to be corrupt!

Similarly a former CM. No need to be corrupt!Got money bags than he can carry is his lifetime.

Infact UMNO chiefs have to be shoved contracts after contracts which they did not tender for. They are forced to accept hefty commissions and have to labour with more money bags.

Terlalu asyik menuduh orang, about time they do some spring cleaning in their own houses first.

Is this the QUALITY of leadership we want to lead our COUNTRY?

Pada pendapat saya MACC has lost all credibilty and has become a tool of the ruling elite. Ku Li ada mengatakan dalam blognya bahawa our Public Institutions have been ruined and it is time for the rakyat to ensure all Public Institutions should work for the rakyat and not be tools for those in power to use at their whims.
MACC kalau mengikut piawaian Dr Khir Toyo seharusnya diberikan hadiah PENYAPU!

DAP and Pakatan were asking for a RCI on TBH's death.

That doesn't sound like they are worried one bit about all this UMNO/BN & MSM misdirection about Triads and corruption, does it?

And what's so Royal about it anyway? UMNO/BN has slapped the King in his face by not implementing the recommendations of the RCI's on Police Commission and corruption in the Judiciary!!

MACC has refuted all allegations? Maybe, but not refuted to the satisfaction of logical thinking citizens.

Malaysian Mirror reports that TBH fell from the window of MACC's office. Planned or accidental, that is the doubt.

Later when it was proven that the lady is neither Chinese national nor of Chinese ethnicity but in fact a Malay woman, DAP suddenly stopped pursuing on the issue. Niether did they apologize for misleading the nation to a point that it almost created a diplomatic issue.

Empty vessels make the most noise

In LKS case you can judge a book by its cover

The death of Teoh Boon Hock has life threatening implication for DAP
This type of spins work on kids, common-lah give us a break man! DAP is not being accused of Teoh's 14th floor fall. Be smart a bit-lah when spinning.

for every 1 pr guy found to be corrupted, easily 50 bn flers are guilty as well.

Just cast a stone over to bn side in the parliament, chances it will land on a corrupt mp... is about 99%

Why was UMNO/BN so foolish as to believe DAP and send their embassador to China and then embarass themselves?

Because they cannot rely on their own police officers to investigate properly or tell the truth, that's why!

You want to know how Teoh and Kugan died--watch this

The DAP's corruption modus operandi in Selangor
Teoh Beng Hock is dead. Let not his death be forgotten and for nothing. The reason why Teoh died is because of the massive scale of corruption by the DAP since they took over the running of the Selangor state government in March 2008.

For the first time we have documents evidence, names, cheque nos, vouchers and projects which the MACC, the Police, the Royal Commission of Inquiry, the Magistrate Court Inquest, the NGOs, the DAP itself and any member of the public can verify themselves.

Here is the catch, the PAKATAN campaigns for clean gomen and is happily accusing the BN as corrupt regime in every election.

It is proven that totally clean government is far reaching, and worst still the PAKATAN lets its gomen to interfered by mobsters and underworld.

Meanwhile, a cut on Teoh Beng Hock’s wrist provides another twist to the investigation into his death.

The injuries were found on Teoh’s right wrist, and Teoh is said to be right-handed.

In almost every blog that touches the Teoh case, this DontPlayPundek fella is there ... trying so hard to deflect all the sensible explanations given by bloggers who do not conform to the "accepted" version that MACC-killed-Teoh-For-Sure-One.

He, like Ronnie Liu who has been menggelabah in the first few hours/days after the discovery of the body: tendang pintu, mengamok yang bukan2, seolah2 championing for justice for Teoh padahal before and after the incident there are more fingers/suspicions pointing towards him than there are molecules in the atmosphere, this DontPlayPundek hero has been frantic, manic and almost schizophrenic in writing and ridiculing every single theory or attempt to explain Teoh's murder in a more logical way other than Gomen-Did-It falsehood trumpeted by the DAP. In short, DontPlayPundek's penggelabahan is soooo ketara. Relax, man!

Yes, someone here mentioned that the explanations here hold more water than RPK's theory. But noooo...... this DontPlayPundek fella has been on a wild rampaging crusade up to a point of maniacal literary tantrum to deflect these points. Hmmm... makes one wonder, kan?

Nak suruh orang tanya MACC and police pulak. Dey DAP pookey! Dont worry about MACC and Police laa. They are doing their investigations and the results will be out soon. The correct concern should be: why are all the people associated with the deceased, immediately prior to his death and the very object of the investigations anyway: the Tans and the Eans and the Lius.... all refusing to cooperate? And in the same breath these are the ones who shout LOUDEST for justice, point the LOUDEST finger to the MACC? As if they want the public to AGREE very earlier on as to who the guilty party should be, even BEFORE investigating, and especially WITHOUT giving helpful inputs to the police?

Let's all watch out , people, as to what the next laughable steps of the pencacai-DAP-at-all-cost will be.

Just wanted to say something…

A lot of Pro-PR supporters have been saying that the document is fake because of the date on the document which started sometime before GE12…i.e. Item 1 dated 28/01/08

HOWEVER if these people actually UNDERSTAND ENGLISH, they would have read the following :

” Documents containing 83 projects (item 89 to 172) in Sg Pelek constituency given to one Wong Chuan Chow. The constituency is under the purview of Ronnie Liu. ”

You present your case and I'll present mine. Blogosphere is open to all and it is up to blog owners to publish comments or not. Some will support you, others will oppose you.

That's democracy which you don't seem to understand probably becoz you are too used to the ususal UMNO/BN top down approach so you can't think for yourself.

Your problem is you can't accept legitimate criticism or opposing views.

And if you can say pundek, so can I. Pundek to you too!

If really you think MACC was not selective..I only have two alphabets for you