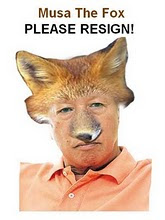 "We will make the relevant disclosures as soon as the third phase or the forensic audit and legal investigations are ready, which are expected to be around the end of August 2010."

According to Ashraf, as at last Thursday August 19th, there is no sign of the forensic audit and internal investigations report on Sime Darby Berhad's RM2 billion plus losses.

What also happen to annual financial announcement that Rocky quashed rumour of a RM2-RM2.5 billion loss? It seems there will be a slight profit instead. Showwwww me!

Today is Sunday August 22nd, 2010. Musa has 7 days till Monday August 30, before August 31st Merdeka public holiday to deliver those reports. Asyraf and many of us keen observers have a wishlist.

Recalling my days on Satuday's weekly wayang night in boarding school, we had a cheer whenever the projector cock up in the middle of movie and the Audio Visual Club members can't fix it fast enough.

Stop. Wayang back on.


Musa can learn something new in the art of wiggling his way out. He has Asyraf's wishlist to contend with, reproduced below:

As I wait anxiously for the audit report, I wonder whether it will recommend punitive action against the entire Board of Directors as well as several senior management staff for their role in misleading the Government, the shareholders and the public in general:

To my mind, besides the Board, the following senior executives should be held answerable:

1. Sekhar Krishnan - The Group Financial Officer when Sime Darby ventured into Qatar and when the whole fiasco began.

2. Hisham Hamdan - The former Head of Group Stategy and Business - he vets through all investments. If he says no go, papers do not go to Board. All projects, including the Qatar projects and Bakun were okayed by him. He did not see the fact that Sime Darby was not ready for the projects in Qatar. It is strange that he is now tasked to lead Energy and Utilities Division.

3. Madam Tong Poh Keow who was appointed the Group Chief Financial Officer of Sime Darby Berhad on June 24, 2008 - She was Group CFO for year end June 2008 and June 2009 accounts - why did she failed to insist on provisions? Why did she sign the Statutory Declaration in the annual report saying that the accounts were correct?

Were the representations in the above sections accurate or misleading?

Since Annual Reports are tabled at the Annual General Meeting for shareholders, the Sime Darby shareholders, public at large, the Securities Commission, Bursa Malaysia, Minority Shareholders' Watchdog Group, etc were obviously misled. This is an obvious breach of the Companies Act.

4. Nik Muhammad Hanafi Nik Abdullah who was then Sime Darby's Head of Internal Audit. He failed to question the Finance and Accounts Department when it did not make provisions for the losses.

5. Abdul Rahim Ismail, who was then the Chief Financial Officer of the Energy and Utilities Division. He should have known all along the extent of the damage.

Asraf is TV3 Editor. If no one calls from Putrajaya to pull the brake, he could really give them a memorable "Merdeka."

My interest is on Khairy kaki and reputably cocky wannabee who made it there, Hisham Hamdan. He was believed to be behind the planned takeover of IJN by Sime Darby and the same nuthead behind the Labu LCCT proposal.

Now that the many young punks like him could get in. Do they have what it takes to deliver and stay? So far ... failure after failures. Khazanah is a pandora treasure box of failures.

Only situa bangka Musa who know nuts of business can be so impress with these new untrained, well "schooled" but cakap besar young set of Melayu Liberal.
at 8/22/2010 12:45:00 PM

these guys are school smart but not street wise.

1) WED - JULY 21, 2010
Nor Yakcop interfered in newspaper affairS
Someone called the editors of The Star, the New Straits Times and Berita Harian instructing them to not report Wee's speech.
The person failed to stop Utusan Malaysia, who had published an online report entitled "Pecat Nor Yakcop, Zarinah."
By the next day, Utusan published instead a denial by SC's Head of Corporate Affair, Abdul Jalil Hamid with snippets in the frontpage. Was it Jalil harrasing the editors?
The commentary boxes in Rocky Bru's here revealed that Jalil was a balaci of Brendan Pereira, the former NST Editor working in cahoot with Kalimullah that left in shame for plagirising Mitch Albon's work.
Whether it is Jalil or Nor Yakcop, both points to the Singapore intelligence and pengkhianat negara, Kalimullah.

This raised several questions:
• Why a Minister should interfere in the affair of newspapers when Najib gave more leverage to the press?
• Does Kalimullah still exert influence on mainstream media?
• Source said Zainul Ariffin, Syed Nadzri and Rashid Yusof are Melayu Liberals promoting Kalimullah's agenda. – ABITHW

NSTP has removed its head of circulation Azman Che Chin and replaced him with Eddie H'ng Seng Poh following the free fall in circulation of its flagship newspaper, the New Straits Times.
Industry sources said Azman was removed and assigned to the Properties Division after NST's circulation dipped below 100,000 copies recently.
Interestingly, mainstream newspaper companies have stopped publishing reports by Audit Bureau of Circulations (ABC) on their circulation figures.
The last report published by the newspapers was the circulation for the first 6 months of 2009 when NST was hit hard at the newsstand when its circulation dropped to 116,411 copies while its rival the Star fell marginally to 293,112 copies.
Industry analysts believed there was no turning back for the NST unless serious efforts were made to revamp its contents.
The analysts lay the blame of NST's poor sales on its contents and that it had nothing to do with its distribution network as the company's other newspaper Metro had done extremely well in the Malay market.
The management of the NSTP is headed by its CEO Dato' Anthony Bujang while the editorial contents of the newspaper is handled by its Group Managing Editor Dato' Zainul Arifin Mohammed Isa.

Eddie H'ng Seng Poh, the new Director of Circulation at the NSTP.

Eddie is more of a salesman selling products on the shelves. But selling newspaper could be a different ball game altogether.

Salam - Look like all the team that screwed up Sime Dirby represents 1Malaysia team eh...ada cina, melayu and India. Holy month of Ramadan, always remind all of us that corruption, ill doing and greed are all ingredients for hell fire. "Amanah " is such a heavy thing to accomplish.

a caveat lector report is on the way. be patient.