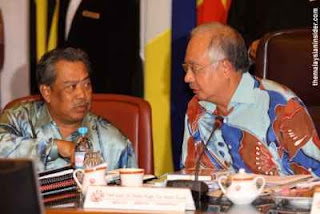 The latest issue of opposition political tabloid Siasah dwelled on Tun Dr Mahathir's statement that he didn't quite understand 1Malaysia. His reason was the Malays and Chinese had different understanding of 1Malayisia.

They reinterpret Muhyiddin's diplomatic response as agreement to Dr Mahathir and labelled him as sabotaguer of 1Malaysia.

The Malaysian Insider (MI) did the same. The initial report was twisted with headlines in that direction if not for Muhyiddin's Press Secretary, Dato Ainon fast response. Their refusal to amend clearly shows their frustation.

But both MI and Siasah went on with the same script to create a perception that Najib and Muhyiddin are heading for loggerhead.

When in fact, Muhyiddin tried to say without being disrespectful of Dr Mahathir that if he doesn't understand, more effort need to be done to explain. It is rude and improper to say in such a manner. Furthermore, it invite other political interpretation.

Did Siasah bother to follow the MI report which saw them tried to pull a fast one on Muhyiddin but was stopped? The MI report was in English.

When Dr Mahathir first commented on August 2nd, MI headlined their report as "Dr Mahathir Najib must explain 1Malaysia." Without reading the content, the twisted headline was already self explanatory.

The spin on Muhyiddin's response the next day was worse and crude. They headlined it as "DPM agrees with Dr Mahathir that people don't understand 1Malaysia."

That got Ainon to call and e-mailed MI to correct what Muhyiddin actually said. This was subsequently reported as a "Error in 1Malaysia article - The Malaysian Insider. Her e-mail was published in full.

However, Jahabar Sadiq, the former NST and Kalimullah's crony and now CEO/Editor of MI, did not amend the original report but only left a not quite visible asterick note. He explained:

As a matter of policy, we add an asterisk and note below an article when it has been corrected. However, we shall accede to your wishes to remove the said asterisk, and the note that follows the asterisk.

Once again, our apologies and herewith reproduced is your letter and the transcript.

How ridiculous a policy is that? He acknowledge the error in the report but decide to leave the wrong version on and publish the amendment in another report?

Emulating ABITW? But this blog clearly highlight any mistakes. Was MI's asterick visible and highlighted clearly?

The next day MI reported Nazri the (attack) dog made commented that Dr Mahathir made a similar mistake on the term Bangsa Malaysia in his Vision 2020 statement for its was ambiguous then.

But their real motive was clearly to perpetuate a perception created by Malaysiakini that Muhyiddin is heading for a clash with Najib. They reported Muhyiddin's denial of a riff on August 10th and in another report, Pakatan politicians insist the rift is real on August 11th.

The rumour of a riff is currently being spread by opposition and their sympathisers in UMNO. However, such a riff is utterly ridiculous. Given the current state of UMNO, the top two men can't be playing politicsa although it is good times.

It sends the wrong message to the grassroots. Although few leaders are skirting the limit, all leaders know another power struggle of the highest level would destroy UMNO. This blogger would just say f**k off to all of them.

It is unlikely for them to open into an open quarrel. Najib owe Muhyiddin for the help nudge Tun Dol in resignation. Muhyiddin is known not to lawan boss. He knows age is not permissable for him to aspire to be PM.

In the event of any differences policies, Muhyiddin would just withdraw than see UMNO fall apart. The Johorean spirit in him will prevail.

Why was opposition able to put such a spin?

Dr Mahathir was not wrong for having such a view. When 1Malaysia slogan was launched with much pomp and pageantry, the communication people at the Prime Minister's office failed to prep up the press on the specific meaning of the slogan.

The Chinese controlled newspapers went one way and Malay newspaper went another way. The opposition controlled political tablod only wanted to play along the Altantunya way.

The poor communication could not put in perspective 1Malaysia in tandem with the subsequent text of priority for the people and emphasis on performance. Rais Yatim and his Information Ministry was to blame also in their dissemination campaign.

Opposition decided to play along the issue of unclear concept of unity within Malaysia; integration or assimilation of the non Bumiputera.

Personally, it was not a deeply thought out slogan. 1Malaysia could be discarded and the slogan, "Rakyat didahulukan, Pencapaian diutamakan" is powerful enough a preposition for a campaign message.

It was these unexplained and unsorted out issues that is fodder for opposition media to seize when the opportunity arise. Our Government seemed ill equiped to handle opposition propaganda. Their communication team seemed unable to understand the need for speed.

Just look at the response to explain the settlers lawsuit. How many days does it take before bloggers can explain the lawsuit. How do I know about Felda's. Well ... I am the one pestering the inaudible Tan Sri Yusof Noor's PA.
at 8/14/2010 11:45:00 AM

Kudos to you, Bro! Damn Kali!

Aaaaah.... MI & Siasah, both close connect to KJ and Liberal Malays NSTP. Got rumours role by THEM want bring down Najib. So its not only confine to Kalimullah meh. Longstanding cooperation. Ask Big Dog about KJ macai want join Mahyidin Yasin but not happen.

Its as bright as daylight that Muhyiddin is doing the same monkey trick as Mamakthir by trying to corner what Najib is promoting. UMNO is in denial but the rakyat is not blind.

The rakyat vision can be manipulated. I know it can be ... easy.

I have supported Najib after elections but now I am dissapointed with him. He is getting as weak as Pak Lah and that is not good.. " lu tolong wa, wa tolong lu" apa ini.

I am giving Najib a test... get rid of Top cat aka Black midas aka Liberal malay till 15 Sept 2010 or I will start slamming him just like Perkasa boss has done.

Rakyat is the BOSS.

Muhyidin is equally responsible to safeguard the Malay interest especially when Najib lately is himself confused when come to core issues of Malay rights.
Najib is dreaming that he won and become PM through non Malay votes.
Suggest Najib stand next GE in Bt Bintang or any other Chinese majority area.